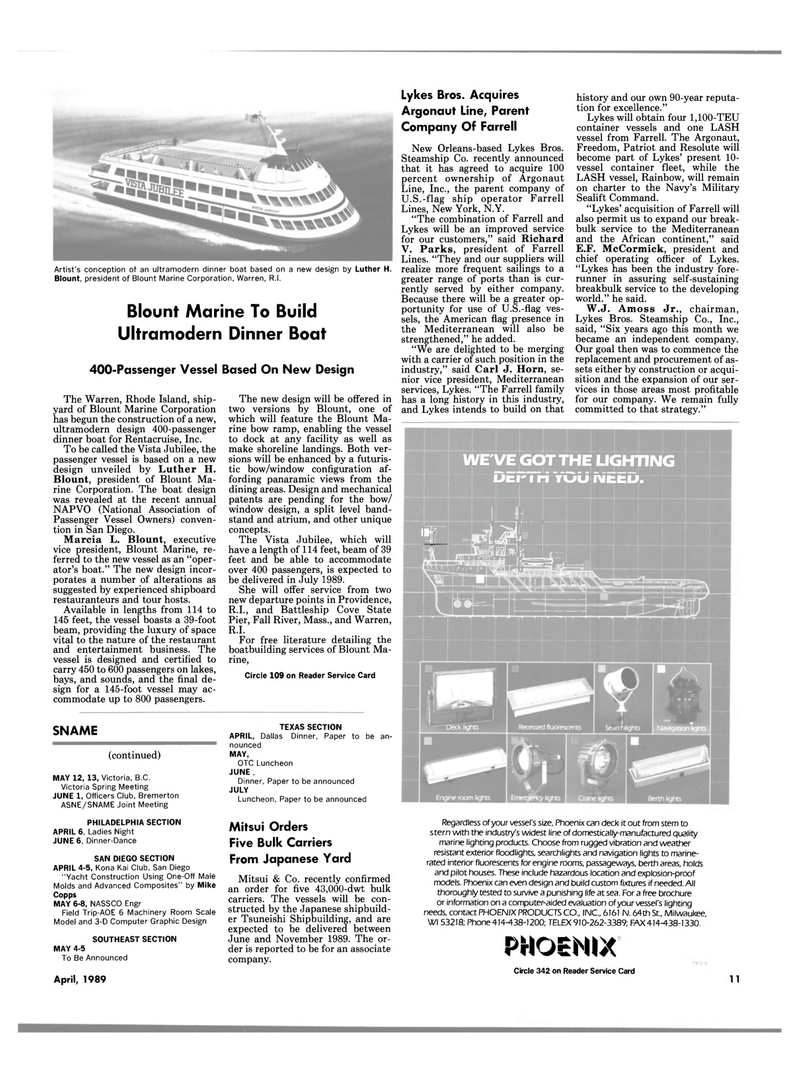 Artist's conception of an ultramodern dinner boat based on a new design by Luther H.

To be called the Vista Jubilee, the passenger vessel is based on a new design unveiled by Luther H.

Blount, president of Blount Ma- rine Corporation. The boat design was revealed at the recent annual

Available in lengths from 114 to 145 feet, the vessel boasts a 39-foot beam, providing the luxury of space vital to the nature of the restaurant and entertainment business. The vessel is designed and certified to carry 450 to 600 passengers on lakes, bays, and sounds, and the final de- sign for a 145-foot vessel may ac- commodate up to 800 passengers.

The new design will be offered in two versions by Blount, one of which will feature the Blount Ma- rine bow ramp, enabling the vessel to dock at any facility as well as make shoreline landings. Both ver- sions will be enhanced by a futuris- tic bow/window configuration af- fording panaramic views from the dining areas. Design and mechanical patents are pending for the bow/ window design, a split level band- stand and atrium, and other unique concepts.

The Vista Jubilee, which will have a length of 114 feet, beam of 39 feet and be able to accommodate over 400 passengers, is expected to be delivered in July 1989.

She will offer service from two new departure points in Providence,

Molds and Advanced Composites" by Mike

APRIL, Dallas Dinner, Paper to be an- nounced

Dinner, Paper to be announced

Luncheon, Paper to be announced

Mitsui & Co. recently confirmed an order for five 43,000-dwt bulk carriers. The vessels will be con- structed by the Japanese shipbuild- er Tsuneishi Shipbuilding, and are expected to be delivered between

June and November 1989. The or- der is reported to be for an associate company.

Steamship Co. recently announced that it has agreed to acquire 100 percent ownership of Argonaut

Line, Inc., the parent company of

Lines, New York, N.Y. "The combination of Farrell and

Lykes will be an improved service for our customers," said Richard

Lines. "They and our suppliers will realize more frequent sailings to a greater range of ports than is cur- rently served by either company.

Because there will be a greater op- portunity for use of U.S.-flag ves- sels, the American flag presence in the Mediterranean will also be strengthened," he added. "We are delighted to be merging with a carrier of such position in the industry," said Carl J. Horn, se- nior vice president, Mediterranean services, Lykes. "The Farrell family has a long history in this industry, and Lykes intends to build on that history and our own 90-year reputa- tion for excellence."

Lykes will obtain four 1,100-TEU container vessels and one LASH vessel from Farrell. The Argonaut,

Freedom, Patriot and Resolute will become part of Lykes' present 10- vessel container fleet, while the

LASH vessel, Rainbow, will remain on charter to the Navy's Military

Sealift Command. "Lykes' acquisition of Farrell will also permit us to expand our break- bulk service to the Mediterranean and the African continent," said

E.F. McCormick, president and chief operating officer of Lykes. "Lykes has been the industry fore- runner in assuring self-sustaining breakbulk service to the developing world." he said.

Our goal then was to commence the replacement and procurement of as- sets either by construction or acqui- sition and the expansion of our ser- vices in those areas most profitable for our company. We remain fully committed to that strategy."

Regardless of your vessel's size. Phoenix can deck it out from stem to stern with the industry's widest line of domestically-manufactured quality marine lighting products. Choose from rugged vibration and weather resistant exterior floodlights, searchlights and navigation lights to marine- rated interior fluorescents for engine rooms, passageways, berth areas, holds and pilot houses. These include hazardous location and explosion-proof models. Phoenix can even design and build custom fixtures if needed. All thoroughly tested to survive a punishing life at sea. For a free brochure or information on a computer-aided evaluation of your vessel's lighting needs, contact PHOENIX PRODUCTS CO., INC., 6161 N. 64th St., Milwaukee,