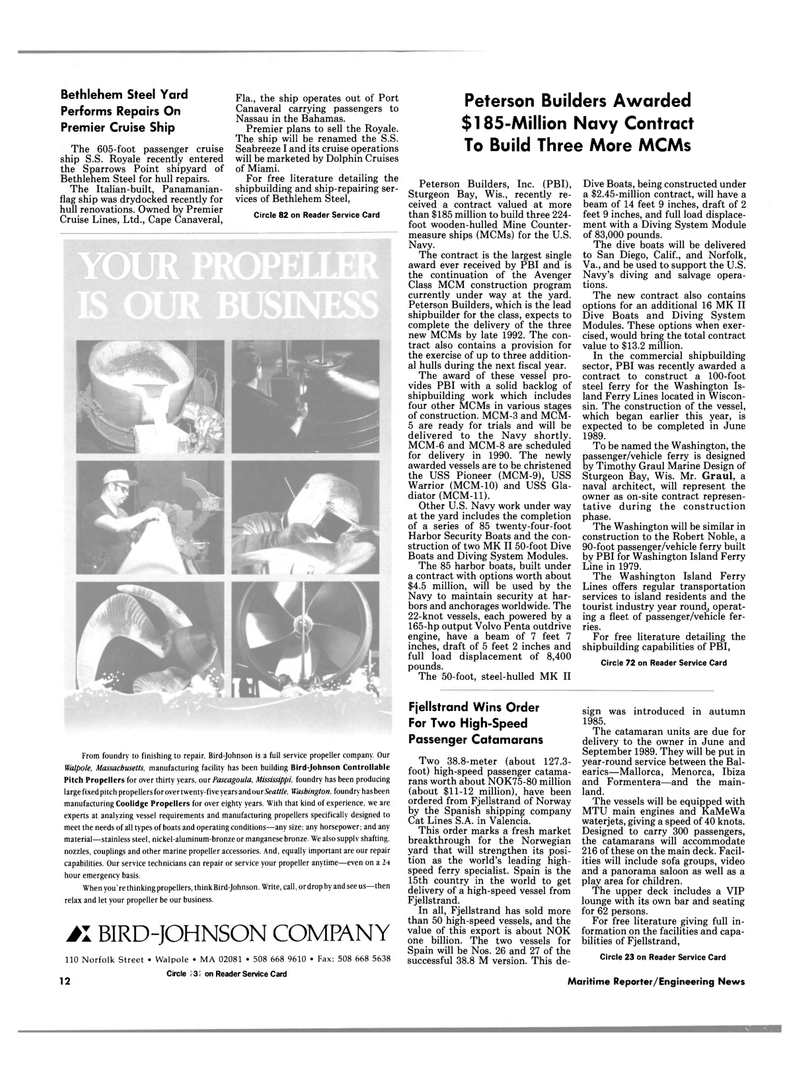 Fla., the ship operates out of Port

Nassau in the Bahamas.

Premier plans to sell the Royale.

The ship will be renamed the S.S.

Seabreeze I and its cruise operations will be marketed by Dolphin Cruises of Miami.

For free literature detailing the shipbuilding and ship-repairing ser- vices of Bethlehem Steel,

Sturgeon Bay, Wis., recently re- ceived a contract valued at more than $185 million to build three 224- foot wooden-hulled Mine Counter- measure ships (MCMs) for the U.S.

Class MCM construction program currently under way at the yard.

Peterson Builders, which is the lead shipbuilder for the class, expects to complete the delivery of the three new MCMs by late 1992. The con- tract also contains a provision for the exercise of up to three addition- al hulls during the next fiscal year.

The award of these vessel pro- vides PBI with a solid backlog of shipbuilding work which includes four other MCMS in various stages of construction. MCM-3 and MCM- 5 are ready for trials and will be delivered to the Navy shortly.

MCM-6 and MCM-8 are scheduled for delivery in 1990. The newly awarded vessels are to be christened the USS Pioneer (MCM-9), USS

Other U.S. Navy work under way at the yard includes the completion of a series of 85 twenty-four-foot

The 85 harbor boats, built under a contract with options worth about $4.5 million, will be used by the

Navy to maintain security at har- bors and anchorages worldwide. The 22-knot vessels, each powered by a 165-hp output Volvo Penta outdrive engine, have a beam of 7 feet 7 inches, draft of 5 feet 2 inches and full load displacement of 8,400 pounds.

Two 38.8-meter (about 127.3- foot) high-speed passenger catama- rans worth about NOK75-80 million (about $11-12 million), have been ordered from Fjellstrand of Norway by the Spanish shipping company

This order marks a fresh market breakthrough for the Norwegian yard that will strengthen its posi- tion as the world's leading high- speed ferry specialist. Spain is the 15th country in the world to get delivery of a high-speed vessel from

In all, Fjellstrand has sold more than 50 high-speed vessels, and the value of this export is about NOK one billion. The two vessels for

Dive Boats, being constructed under a $2.45-million contract, will have a beam of 14 feet 9 inches, draft of 2 feet 9 inches, and full load displace- ment with a Diving System Module of 83,000 pounds.

The dive boats will be delivered to San Diego, Calif., and Norfolk,

Modules. These options when exer- cised, would bring the total contract value to $13.2 million.

In the commercial shipbuilding sector, PBI was recently awarded a contract to construct a 100-foot steel ferry for the Washington Is- land Ferry Lines located in Wiscon- sin. The construction of the vessel, which began earlier this year, is expected to be completed in June 1989.

To be named the Washington, the passenger/vehicle ferry is designed by Timothy Graul Marine Design of

The Washington will be similar in construction to the Robert Noble, a 90-foot passenger/vehicle ferry built by PBI for Washington Island Ferry

For free literature detailing the shipbuilding capabilities of PBI,

Circle 72 on Reader Service Card sign was introduced in autumn 1985.

September 1989. They will be put in year-round service between the Bal- earics—Mallorca, Menorca, Ibiza and Formentera—and the main- land.

The vessels will be equipped with

Designed to carry 300 passengers, the catamarans will accommodate 216 of these on the main deck. Facil- ities will include sofa groups, video and a panorama saloon as well as a play area for children.

The upper deck includes a VIP lounge with its own bar and seating for 62 persons.

For free literature giving full in- formation on the facilities and capa- bilities of Fjellstrand,

From foundry to finishing to repair, Bird-Johnson is a full service propeller company. Our

Pitch Propellers for over thirty years, our Pascagoula, Mississippi, foundry has been producing large fixed pitch propellers for over twenty-five years and our Seattle, Washington, foundry has been manufacturing Coolidge Propellers for over eighty years. With that kind of experience, we are experts at analyzing vessel requirements and manufacturing propellers specifically designed to meet the needs of all types of boats and operating conditions—any size; any horsepower; and any material—stainless steel, nickel-aluminum-bronze or manganese bronze. We also supply shafting, nozzles, couplings and other marine propeller accessories. And, equally important are our repair capabilities. Our service technicians can repair or service your propeller anytime—even on a 24 hour emergency basis.