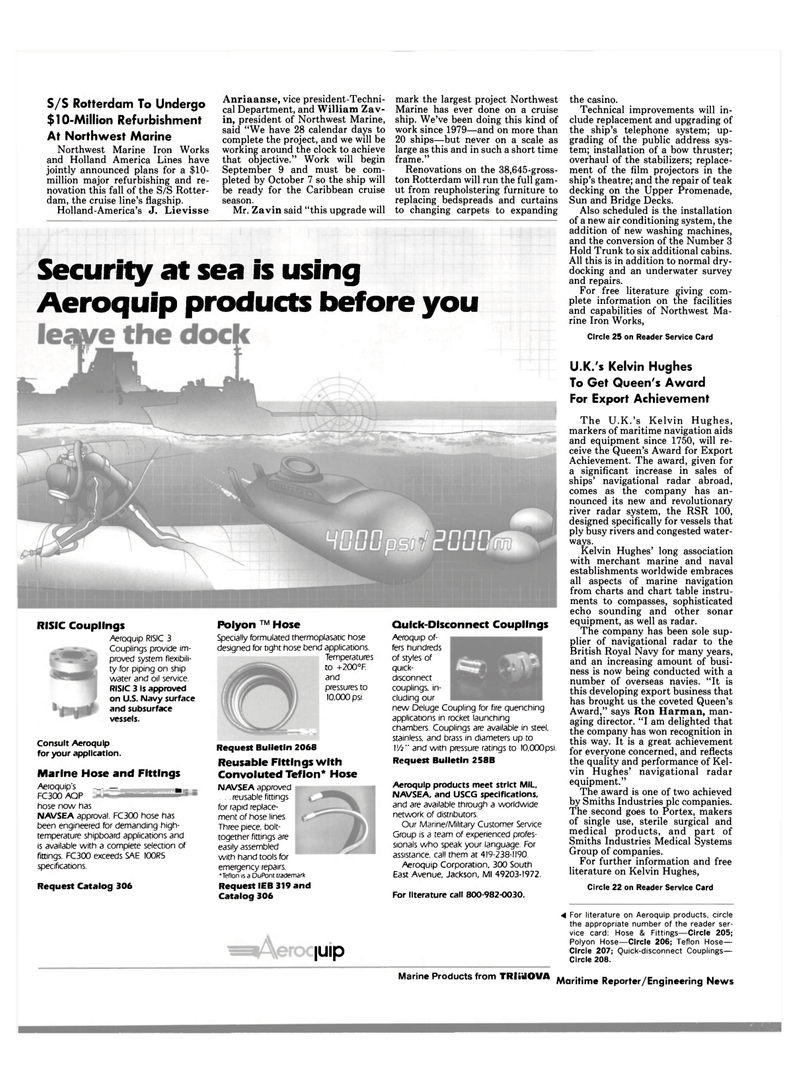 Northwest Marine Iron Works and Holland America Lines have jointly announced plans for a $10- million major refurbishing and re- novation this fall of the S/S Rotter- dam, the cruise line's flagship.

Anriaanse, vice president-Techni- cal Department, and William Zav- in, president of Northwest Marine, said "We have 28 calendar days to complete the project, and we will be working around the clock to achieve that objective." Work will begin

September 9 and must be com- pleted by October 7 so the ship will be ready for the Caribbean cruise season.

Marine has ever done on a cruise ship. We've been doing this kind of work since 1979—and on more than 20 ships—but never on a scale as large as this and in such a short time frame."

Renovations on the 38,645-gross- ton Rotterdam will run the full gam- ut from reupholstering furniture to replacing bedspreads and curtains to changing carpets to expanding

Aeroquip of- fers hundreds of styles of quick- disconnect couplings, in- cluding our new Deluge Coupling for fire quenching applications in rocket launching chambers. Couplings are available in steel, stainless, and brass in diameters up to 1Vi" and with pressure ratings to 10,000psi.

Security at sea is using

Aeroquip products before you

RISIC 3 is approved on U.S. Navy surface and subsurface vessels.

Consult Aeroquip for your application.

MAVSEA, and USCG specifications, and are available through a worldwide network of distributors.

Group is a team of experienced profes- sionals who speak your language. For assistance, call them at 419-238-1190.

Technical improvements will in- clude replacement and upgrading of the ship's telephone system; up- grading of the public address sys- tem; installation of a bow thruster; overhaul of the stabilizers; replace- ment of the film projectors in the ship's theatre; and the repair of teak decking on the Upper Promenade,

Also scheduled is the installation of a new air conditioning system, the addition of new washing machines, and the conversion of the Number 3

All this is in addition to normal dry- docking and an underwater survey and repairs.

To Get Queen's Award

The U.K.'s Kelvin Hughes, markers of maritime navigation aids and equipment since 1750, will re- ceive the Queen's Award for Export

Achievement. The award, given for a significant increase in sales of ships' navigational radar abroad, comes as the company has an- nounced its new and revolutionary river radar system, the RSR 100, designed specifically for vessels that ply busy rivers and congested water- ways.

British Royal Navy for many years, and an increasing amount of busi- ness is now being conducted with a number of overseas navies. "It is this developing export business that has brought us the coveted Queen's

Award," says Ron Harman, man- aging director. "I am delighted that the company has won recognition in this way. It is a great achievement for everyone concerned, and reflects the quality and performance of Kel- vin Hughes' navigational radar equipment."

The award is one of two achieved by Smiths Industries pic companies.

The second goes to Portex, makers of single use, sterile surgical and medical products, and part of

Three piece, bolt- together fittings are easily assembled with hand tools for emergency repairs. •Teflon is a DuPont trademark