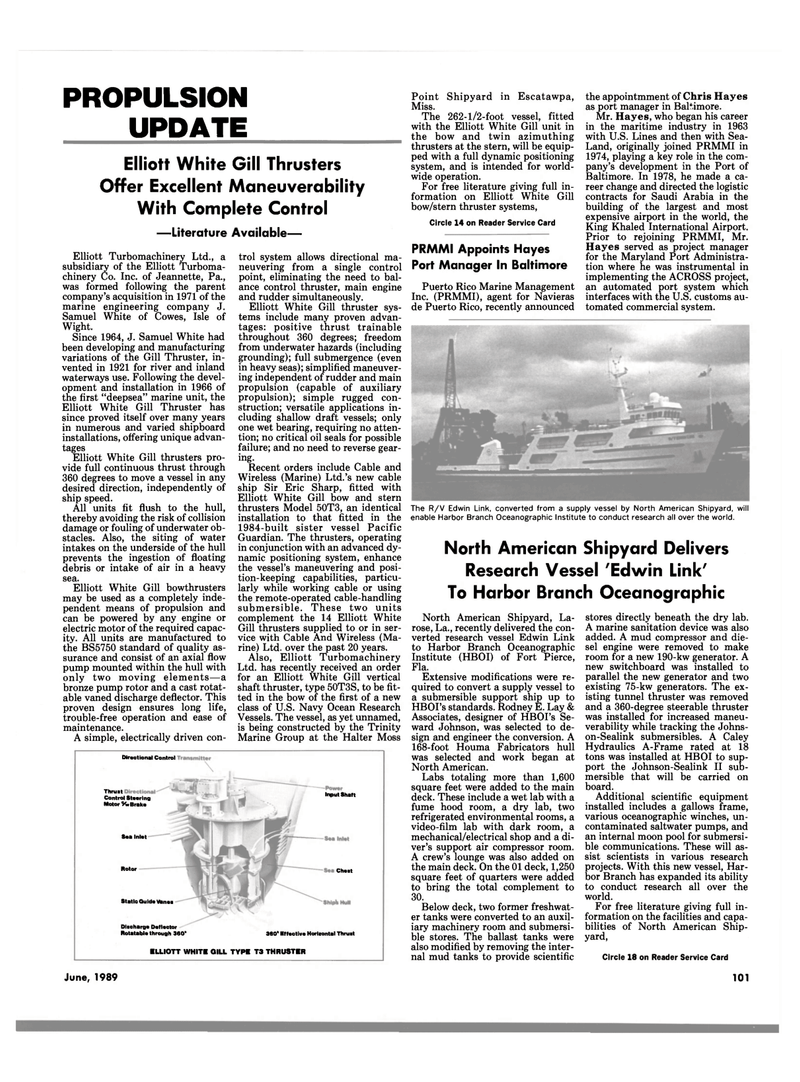 Elliott Turbomachinery Ltd., a subsidiary of the Elliott Turboma- chinery Co. Inc. of Jeannette, Pa., was formed following the parent company's acquisition in 1971 of the marine engineering company J.

Samuel White of Cowes, Isle of

Since 1964, J. Samuel White had been developing and manufacturing variations of the Gill Thruster, in- vented in 1921 for river and inland waterways use. Following the devel- opment and installation in 1966 of the first "deepsea" marine unit, the

Elliott White Gill Thruster has since proved itself over many years in numerous and varied shipboard installations, offering unique advan- tages

All units fit flush to the hull, thereby avoiding the risk of collision damage or fouling of underwater ob- stacles. Also, the siting of water intakes on the underside of the hull prevents the ingestion of floating debris or intake of air in a heavy sea.

Elliott White Gill bowthrusters may be used as a completely inde- pendent means of propulsion and can be powered by any engine or electric motor of the required capac- ity. All units are manufactured to the BS5750 standard of quality as- surance and consist of an axial flow pump mounted within the hull with only two moving elements—a bronze pump rotor and a cast rotat- able vaned discharge deflector. This proven design ensures long life, trouble-free operation and ease of maintenance.

The 262-1/2-foot vessel, fitted with the Elliott White Gill unit in the bow and twin azimuthing thrusters at the stern, will be equip- ped with a full dynamic positioning system, and is intended for world- wide operation.

Recent orders include Cable and

Gill thrusters supplied to or in ser- vice with Cable And Wireless (Ma- rine) Ltd. over the past 20 years.

Ltd. has recently received an order for an Elliott White Gill vertical shaft thruster, type 50T3S, to be fit- ted in the bow of the first of a new class of U.S. Navy Ocean Research

Vessels. The vessel, as yet unnamed, is being constructed by the Trinity

Marine Group at the Halter Moss

Mr. Hayes, who began his career in the maritime industry in 1963 with U.S. Lines and then with Sea-

Land, originally joined PRMMI in 1974, playing a key role in the com- pany's development in the Port of

Baltimore. In 1978, he made a ca- reer change and directed the logistic contracts for Saudi Arabia in the building of the largest and most expensive airport in the world, the

Prior to rejoining PRMMI, Mr.

Hayes served as project manager for the Maryland Port Administra- tion where he was instrumental in implementing the ACROSS project, an automated port system which interfaces with the U.S. customs au- tomated commercial system.

The R/V Edwin Link, converted from a supply vessel by North American Shipyard, will enable Harbor Branch Oceanographic Institute to conduct research all over the world.

Associates, designer of HBOI's Se- ward Johnson, was selected to de- sign and engineer the conversion. A 168-foot Houma Fabricators hull was selected and work began at

Labs totaling more than 1,600 square feet were added to the main deck. These include a wet lab with a fume hood room, a dry lab, two refrigerated environmental rooms, a video-film lab with dark room, a mechanical/electrical shop and a di- ver's support air compressor room.

A crew's lounge was also added on the main deck. On the 01 deck, 1,250 square feet of quarters were added to bring the total complement to 30.

A marine sanitation device was also added. A mud compressor and die- sel engine were removed to make room for a new 190-kw generator. A new switchboard was installed to parallel the new generator and two existing 75-kw generators. The ex- isting tunnel thruster was removed and a 360-degree steerable thruster was installed for increased maneu- verability while tracking the Johns- on-Sealink submersibles. A Caley

Hydraulics A-Frame rated at 18 tons was installed at HBOI to sup- port the Johnson-Sealink II sub- mersible that will be carried on board.

Additional scientific equipment installed includes a gallows frame, various oceanographic winches, un- contaminated saltwater pumps, and an internal moon pool for submersi- ble communications. These will as- sist scientists in various research projects. With this new vessel, Har- bor Branch has expanded its ability to conduct research all over the world.

For free literature giving full in- formation on the facilities and capa- bilities of North American Ship- yard,