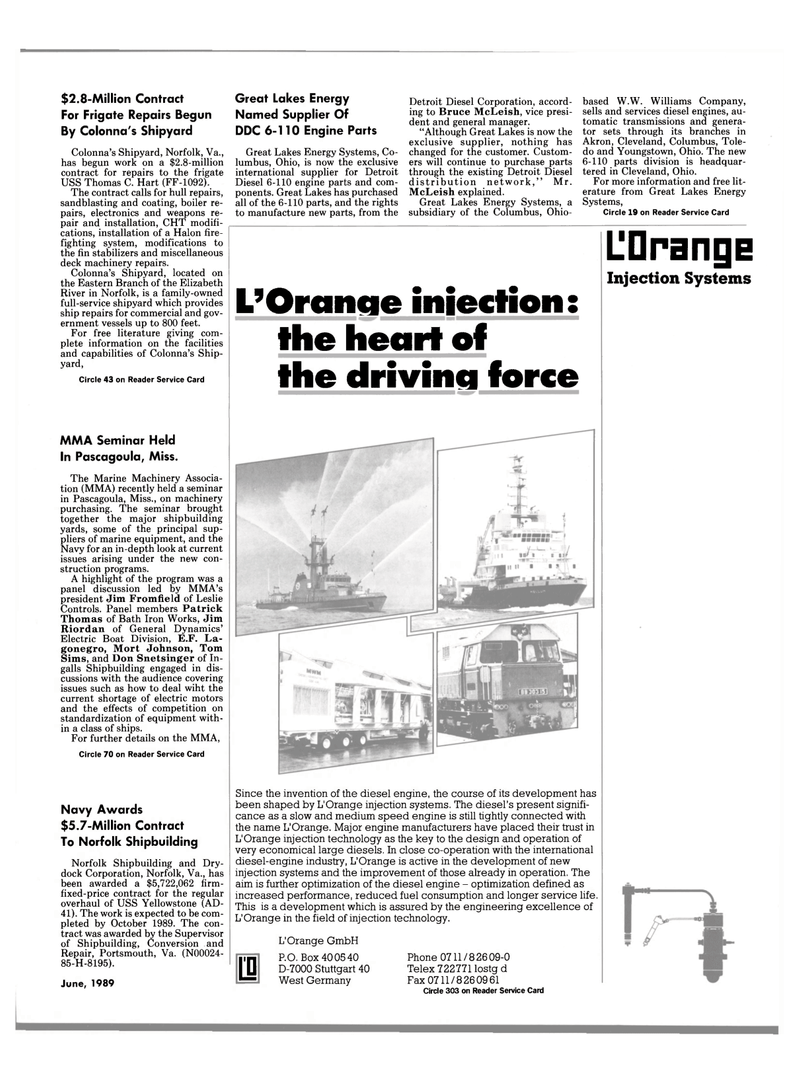 Colonna's Shipyard, Norfolk, Va., has begun work on a $2.8-million contract for repairs to the frigate

The contract calls for hull repairs, sandblasting and coating, boiler re- pairs, electronics and weapons re- pair and installation, CHT modifi- cations, installation of a Halon fire- fighting system, modifications to the fin stabilizers and miscellaneous deck machinery repairs.

Colonna's Shipyard, located on the Eastern Branch of the Elizabeth

River in Norfolk, is a family-owned full-service shipyard which provides ship repairs for commercial and gov- ernment vessels up to 800 feet.

For free literature giving com- plete information on the facilities and capabilities of Colonna's Ship- yard,

The Marine Machinery Associa- tion (MMA) recently held a seminar in Pascagoula, Miss., on machinery purchasing. The seminar brought together the major shipbuilding yards, some of the principal sup- pliers of marine equipment, and the

Navy for an in-depth look at current issues arising under the new con- struction programs.

Sims, and Don Snetsinger of In- galls Shipbuilding engaged in dis- cussions with the audience covering issues such as how to deal wiht the current shortage of electric motors and the effects of competition on standardization of equipment with- in a class of ships.

For further details on the MMA,

Norfolk Shipbuilding and Dry- dock Corporation, Norfolk, Va., has been awarded a $5,722,062 firm- fixed-price contract for the regular overhaul of USS Yellowstone (AD- 41). The work is expected to be com- pleted by October 1989. The con- tract was awarded by the Supervisor of Shipbuilding, Conversion and

Diesel 6-110 engine parts and com- ponents. Great Lakes has purchased all of the 6-110 parts, and the rights to manufacture new parts, from the

Detroit Diesel Corporation, accord- ing to Bruce McLeish, vice presi- dent and general manager. "Although Great Lakes is now the exclusive supplier, nothing has changed for the customer. Custom- ers will continue to purchase parts through the existing Detroit Diesel distribution network," Mr.

Great Lakes Energy Systems, a subsidiary of the Columbus, Ohio- based W.W. Williams Company, sells and services diesel engines, au- tomatic transmissions and genera- tor sets through its branches in

Circle 19 on Reader Service Card 1'Orqnqe injection: the hear* of the driving force

Since the invention of the diesel engine, the course of its development has been shaped by L'Orange injection systems. The diesel's present signifi- cance as a slow and medium speed engine is still tightly connected with the name L'Orange. Major engine manufacturers have placed their trust in

L'Orange injection technology as the key to the design and operation of very economical large diesels. In close co-operation with the international diesel-engine industry, L'Orange is active in the development of new injection systems and the improvement of those already in operation. The aim is further optimization of the diesel engine - optimization defined as increased performance, reduced fuel consumption and longer service life.

L'Orange in the field of injection technology.