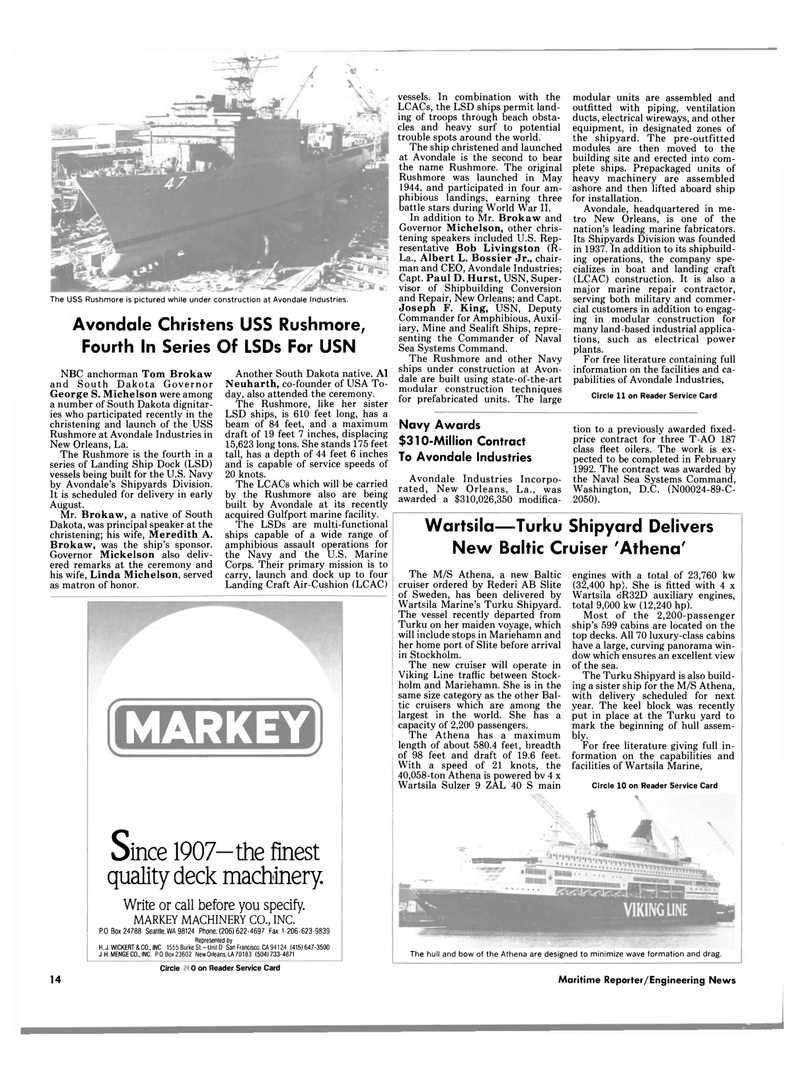 The USS Rushmore is pictured while under construction at Avondale Industries.

Fourth In Series Of LSDs For USN

George S. Michelson were among a number of South Dakota dignitar- ies who participated recently in the christening and launch of the USS

Rushmore at Avondale Industries in

The Rushmore is the fourth in a series of Landing Ship Dock (LSD) vessels being built for the U.S. Navy by Avondale's Shipyards Division.

It is scheduled for delivery in early

Mr. Brokaw, a native of South

Dakota, was principal speaker at the christening; his wife, Meredith A.

Brokaw, was the ship's sponsor.

Governor Mickelson also deliv- ered remarks at the ceremony and his wife, Linda Michelson, served as matron of honor.

Another South Dakota native, A1

Neuharth, co-founder of USA To- day, also attended the ceremony.

The LCACs which will be carried by the Rushmore also are being built by Avondale at its recently acquired Gulfport marine facility.

The LSDs are multi-functional ships capable of a wide range of amphibious assault operations for the Navy and the U.S. Marine

Corps. Their primary mission is to carry, launch and dock up to four

Since 1907—the finest quality deck machinery.

Write or call before you specify.

LCACs, the LSD ships permit land- ing of troops through beach obsta- cles and heavy surf to potential trouble spots around the world.

The ship christened and launched at Avondale is the second to bear the name Rushmore. The original

Rushmore was launched in May 1944, and participated in four am- phibious landings, earning three battle stars during World War II.

In addition to Mr. Brokaw and

Commander for Amphibious, Auxil- iary, Mine and Sealift Ships, repre- senting the Commander of Naval

The Rushmore and other Navy ships under construction at Avon- dale are built using state-of-the-art modular construction techniques for prefabricated units. The large modular units are assembled and outfitted with piping, ventilation ducts, electrical wireways, and other equipment, in designated zones of the shipyard. The pre-outfitted modules are then moved to the building site and erected into com- plete ships. Prepackaged units of heavy machinery are assembled ashore and then lifted aboard ship for installation.

Avondale, headquartered in me- tro New Orleans, is one of the nation's leading marine fabricators.

Its Shipyards Division was founded in 1937. In addition to its shipbuild- ing operations, the company spe- cializes in boat and landing craft (LCAC) construction. It is also a major marine repair contractor, serving both military and commer- cial customers in addition to engag- ing in modular construction for many land-based industrial applica- tions, such as electrical power plants.

For free literature containing full information on the facilities and ca- pabilities of Avondale Industries,

Avondale Industries Incorpo- rated, New Orleans, La., was awarded a $310,026,350 modifica- tion to a previously awarded fixed- price contract for three T-AO 187 class fleet oilers. The work is ex- pected to be completed in February 1992. The contract was awarded by the Naval Sea Systems Command,

The M/S Athena, a new Baltic cruiser ordered by Rederi AB Slite of Sweden, has been delivered by

The vessel recently departed from

Turku on her maiden voyage, which will include stops in Mariehamn and her home port of Slite before arrival in Stockholm.

The new cruiser will operate in

Viking Line traffic between Stock- holm and Mariehamn. She is in the same size category as the other Bal- tic cruisers which are among the largest in the world. She has a capacity of 2,200 passengers.

Most of the 2,200-passenger ship's 599 cabins are located on the top decks. All 70 luxury-class cabins have a large, curving panorama win- dow which ensures an excellent view of the sea.

The Turku Shipyard is also build- ing a sister ship for the M/S Athena, with delivery scheduled for next year. The keel block was recently put in place at the Turku yard to mark the beginning of hull assem- bly.

For free literature giving full in- formation on the capabilities and facilities of Wartsila Marine,

The hull and bow of the Athena are designed to minimize wave formation and drag. 14