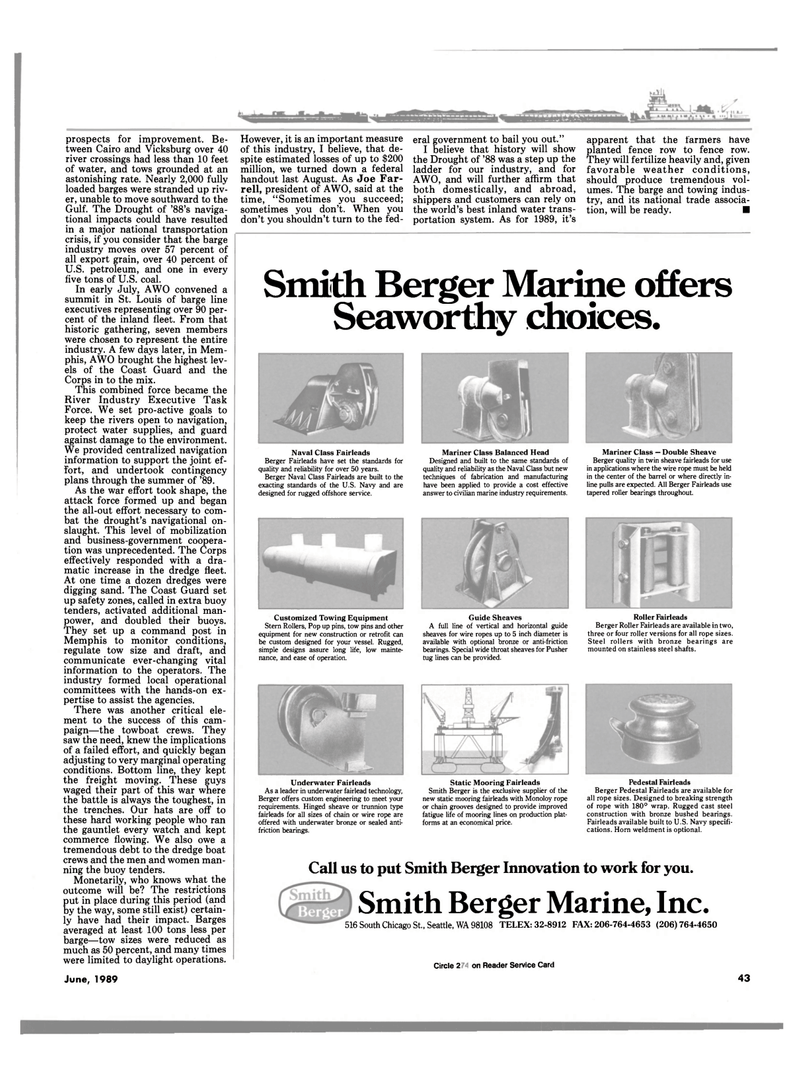 prospects for improvement. Be- tween Cairo and Vicksburg over 40 river crossings had less than 10 feet of water, and tows grounded at an astonishing rate. Nearly 2,000 fully loaded barges were stranded up riv- er, unable to move southward to the

Gulf. The Drought of '88's naviga- tional impacts could have resulted in a major national transportation crisis, if you consider that the barge industry moves over 57 percent of all export grain, over 40 percent of

U.S. petroleum, and one in every five tons of U.S. coal.

In early July, AWO convened a summit in St. Louis of barge line executives representing over 90 per- cent of the inland fleet. From that historic gathering, seven members were chosen to represent the entire industry. A few days later, in Mem- phis, AWO brought the highest lev- els of the Coast Guard and the

Corps in to the mix.

This combined force became the

Force. We set pro-active goals to keep the rivers open to navigation, protect water supplies, and guard against damage to the environment.

We provided centralized navigation information to support the joint ef- fort, and undertook contingency plans through the summer of '89.

As the war effort took shape, the attack force formed up and began the all-out effort necessary to com- bat the drought's navigational on- slaught. This level of mobilization and business-government coopera- tion was unprecedented. The Corps effectively responded with a dra- matic increase in the dredge fleet.

At one time a dozen dredges were digging sand. The Coast Guard set up safety zones, called in extra buoy tenders, activated additional man- power, and doubled their buoys.

Memphis to monitor conditions, regulate tow size and draft, and communicate ever-changing vital information to the operators. The industry formed local operational committees with the hands-on ex- pertise to assist the agencies.

There was another critical ele- ment to the success of this cam- paign—the towboat crews. They saw the need, knew the implications of a failed effort, and quickly began adjusting to very marginal operating conditions. Bottom line, they kept the freight moving. These guys waged their part of this war where the battle is always the toughest, in the trenches. Our hats are off to these hard working people who ran the gauntlet every watch and kept commerce flowing. We also owe a tremendous debt to the dredge boat crews and the men and women man- ning the buoy tenders.

Monetarily, who knows what the outcome will be? The restrictions put in place during this period (and by the way, some still exist) certain- ly have had their impact. Barges averaged at least 100 tons less per barge—tow sizes were reduced as much as 50 percent, and many times were limited to daylight operations.

However, it is an important measure of this industry, I believe, that de- spite estimated losses of up to $200 million, we turned down a federal handout last August. As Joe Far- rell, president of AWO, said at the time, "Sometimes you succeed; sometimes you don't. When you don't you shouldn't turn to the fed- eral government to bail you out."

I believe that history will show the Drought of '88 was a step up the ladder for our industry, and for

AWO, and will further affirm that both domestically, and abroad, shippers and customers can rely on the world's best inland water trans- portation system. As for 1989, it's apparent that the farmers have planted fence row to fence row.

They will fertilize heavily and, given favorable weather conditions, should produce tremendous vol- umes. The barge and towing indus- try, and its national trade associa- tion, will be ready. •

Berger Fairleads have set the standards for quality and reliability for over 50 years.

Berger Naval Class Fairleads are built to the exacting standards of the U.S. Navy and are designed for rugged offshore service.

Designed and built to the same standards of quality and reliability as the Naval Class but new techniques of fabrication and manufacturing have been applied to provide a cost effective answer to civilian marine industry requirements.

Berger quality in twin sheave fairleads for use in applications where the wire rope must be held in the center of the barrel or where directly in- line pulls are expected. All Berger Fairleads use tapered roller bearings throughout.

Stern Rollers, Pop up pins, tow pins and other equipment for new construction or retrofit can be custom designed for your vessel. Rugged, simple designs assure long life, low mainte- nance, and ease of operation.

A full line of vertical and horizontal guide sheaves for wire ropes up to 5 inch diameter is available with optional bronze or anti-friction bearings. Special wide throat sheaves for Pusher tug lines can be provided.

Berger Roller Fairleads are available in two, three or four roller versions for all rope sizes.

As a leader in underwater fairlead technology,

Berger offers custom engineering to meet your requirements. Hinged sheave or trunnion type fairleads for all sizes of chain or wire rope are offered with underwater bronze or sealed anti- friction bearings.

Smith Berger is the exclusive supplier of the new static mooring fairleads with Monoloy rope or chain grooves designed to provide improved fatigue life of mooring lines on production plat- forms at an economical price.

Call us to put Smith Berger Innovation to work for you.