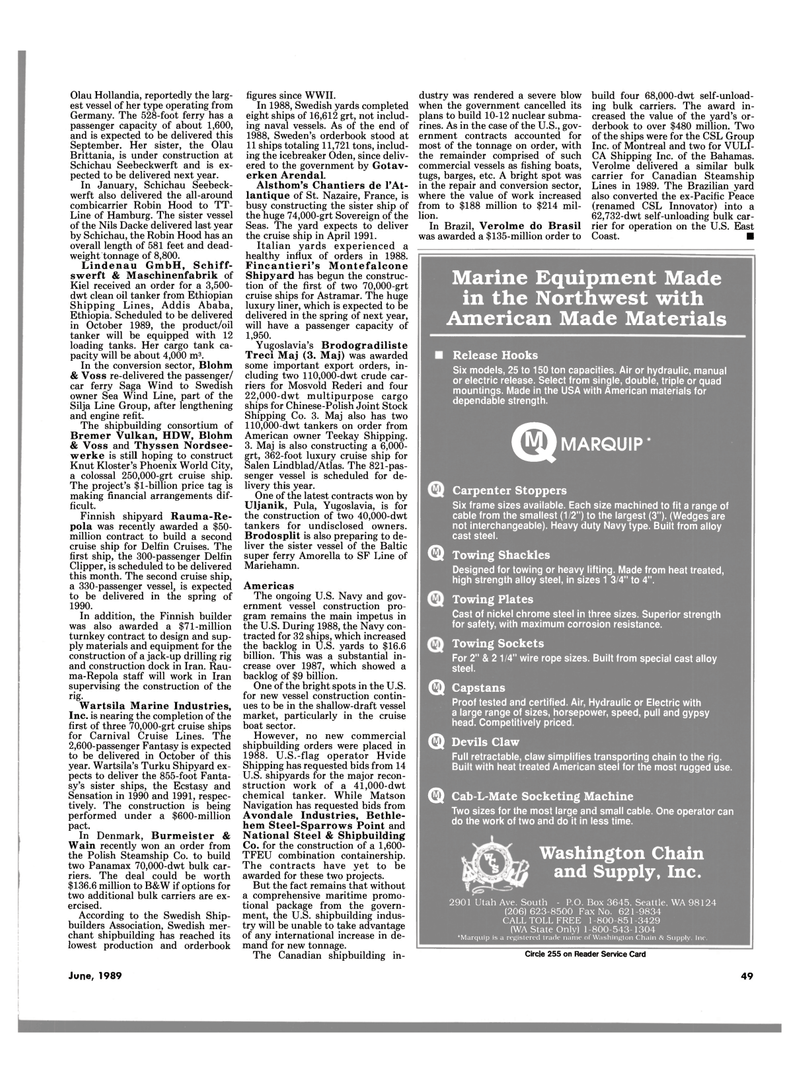 Olau Hollandia, reportedly the larg- est vessel of her type operating from

Germany. The 528-foot ferry has a passenger capacity of about 1,600, and is expected to be delivered this

September. Her sister, the Olau

Brittania, is under construction at

Schichau Seebeckwerft and is ex- pected to be delivered next year.

Line of Hamburg. The sister vessel of the Nils Dacke delivered last year by Schichau, the Robin Hood has an overall length of 581 feet and dead- weight tonnage of 8,800.

Kiel received an order for a 3,500- dwt clean oil tanker from Ethiopian

Ethiopia. Scheduled to be delivered in October 1989, the product/oil tanker will be equipped with 12 loading tanks. Her cargo tank ca- pacity will be about 4,000 m3.

The shipbuilding consortium of

Inc. is nearing the completion of the first of three 70,000-grt cruise ships for Carnival Cruise Lines. The 2,600-passenger Fantasy is expected to be delivered in October of this year. Wartsila's Turku Shipyard ex- pects to deliver the 855-foot Fanta- sy's sister ships, the Ecstasy and

Wain recently won an order from the Polish Steamship Co. to build two Panamax 70,000-dwt bulk car- riers. The deal could be worth $136.6 million to B&W if options for two additional bulk carriers are ex- ercised.

According to the Swedish Ship- builders Association, Swedish mer- chant shipbuilding has reached its lowest production and orderbook figures since WWII.

In 1988, Swedish yards completed eight ships of 16,612 grt, not includ- ing naval vessels. As of the end of 1988, Sweden's orderbook stood at 11 ships totaling 11,721 tons, includ- ing the icebreaker Oden, since deliv- ered to the government by Gotav- erken Arendal.

Alsthom's Chantiers de l'At- lantique of St. Nazaire, France, is busy constructing the sister ship of the huge 74,000-grt Sovereign of the

Seas. The yard expects to deliver the cruise ship in April 1991.

Italian yards experienced a healthy influx of orders in 1988.

Shipyard has begun the construc- tion of the first of two 70,000-grt cruise ships for Astramar. The huge luxury liner, which is expected to be delivered in the spring of next year, will have a passenger capacity of 1,950.

Salen Lindblad/Atlas. The 821-pas- senger vessel is scheduled for de- livery this year.

One of the latest contracts won by

Uljanik, Pula, Yugoslavia, is for the construction of two 40,000-dwt tankers for undisclosed owners.

The ongoing U.S. Navy and gov- ernment vessel construction pro- gram remains the main impetus in the U.S. During 1988, the Navy con- tracted for 32 ships, which increased the backlog in U.S. yards to $16.6 billion. This was a substantial in- crease over 1987, which showed a backlog of $9 billion.

One of the bright spots in the U.S. for new vessel construction contin- ues to be in the shallow-draft vessel market, particularly in the cruise boat sector.

However, no new commercial shipbuilding orders were placed in 1988. U.S.-flag operator Hvide

Shipping has requested bids from 14

U.S. shipyards for the major recon- struction work of a 41,000-dwt chemical tanker. While Matson

Navigation has requested bids from

The contracts have yet to be awarded for these two projects.

But the fact remains that without a comprehensive maritime promo- tional package from the govern- ment, the U.S. shipbuilding indus- try will be unable to take advantage of any international increase in de- mand for new tonnage.

The Canadian shipbuilding in- dustry was rendered a severe blow when the government cancelled its plans to build 10-12 nuclear subma- rines. As in the case of the U.S., gov- ernment contracts accounted for most of the tonnage on order, with the remainder comprised of such commercial vessels as fishing boats, tugs, barges, etc. A bright spot was in the repair and conversion sector, where the value of work increased from to $188 million to $214 mil- lion.

In Brazil, Verolme do Brasil was awarded a $135-million order to build four 68,000-dwt self-unload- ing bulk carriers. The award in- creased the value of the yard's or- derbook to over $480 million. Two of the ships were for the CSL Group

Inc. of Montreal and two for VULI-

CA Shipping Inc. of the Bahamas.

Lines in 1989. The Brazilian yard also converted the ex-Pacific Peace (renamed CSL Innovator) into a 62,732-dwt self-unloading bulk car- rier for operation on the U.S. East

Marine Equipment Made in the Northwest with

Six models, 25 to 150 ton capacities. Air or hydraulic, manual or electric release. Select from single, double, triple or quad mountings. Made in the USA with American materials for dependable strength. © MARQUIP

Six frame sizes available. Each size machined to fit a range of cable from the smallest (1/2") to the largest (3"). (Wedges are not interchangeable). Heavy duty Navy type. Built from alloy cast steel. (3) Towing Shackles

Designed for towing or heavy lifting. Made from heat treated, high strength alloy steel, in sizes 1 3/4" to 4".

Built with heat treated American steel for the most rugged use. @ Cab-L-Mate Socketing Machine

Two sizes for the most large and small cable. One operator can do the work of two and do it in less time.