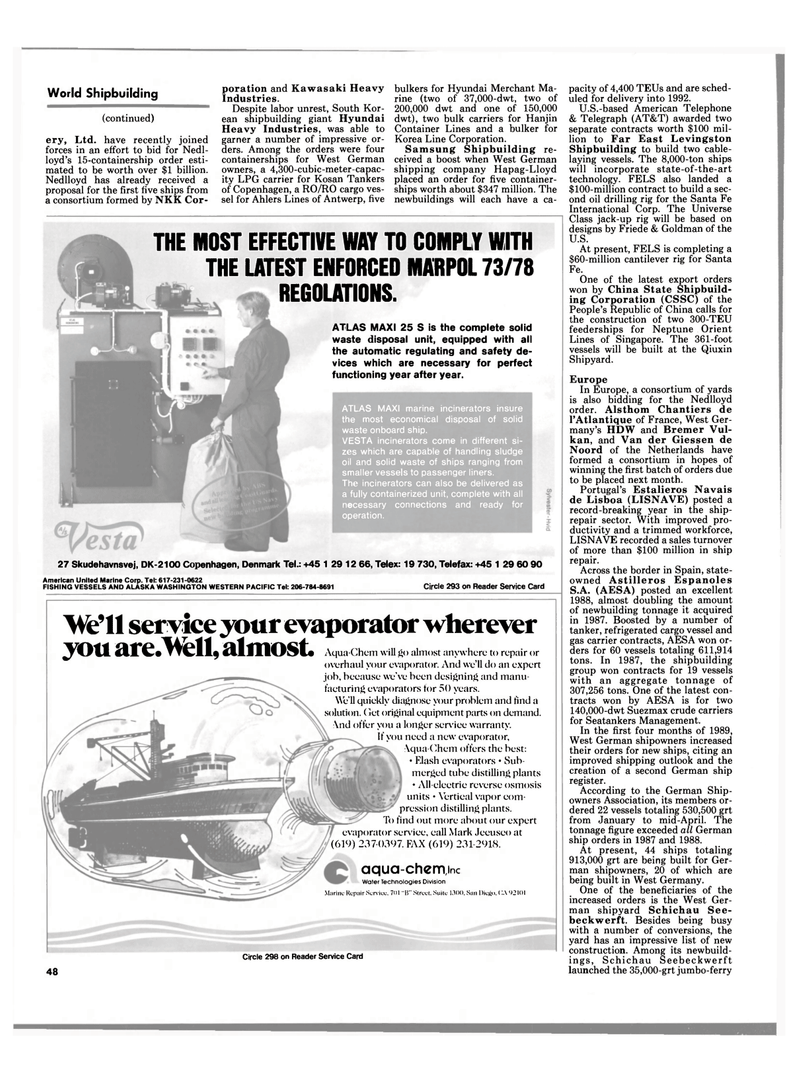 World Shipbuilding (continued) ery, Ltd. have recently joined forces in an effort to bid for Nedl- loyd's 15-containership order esti- mated to be worth over $1 billion.

Heavy Industries, was able to garner a number of impressive or- ders. Among the orders were four containerships for West German owners, a 4,300-cubic-meter-capac- ity LPG carrier for Kosan Tankers of Copenhagen, a RO/RO cargo ves- sel for Ahlers Lines of Antwerp, five bulkers for Hyundai Merchant Ma- rine (two of 37,000-dwt, two of 200,000 dwt and one of 150,000 dwt), two bulk carriers for Hanjin

Container Lines and a bulker for

Samsung Shipbuilding re- ceived a boost when West German shipping company Hapag-Lloyd placed an order for five container- ships worth about $347 million. The newbuildings will each have a ca- pacity of 4,400 TEUs and are sched- uled for delivery into 1992.

At present, FELS is completing a $60-million cantilever rig for Santa

Lines of Singapore. The 361-foot vessels will be built at the Qiuxin

Noord of the Netherlands have formed a consortium in hopes of winning the first batch of orders due to be placed next month.

LISNAVE recorded a sales turnover of more than $100 million in ship repair.

Across the border in Spain, state- owned Astilleros Espanoles

S.A. (AESA) posted an excellent 1988, almost doubling the amount of newbuilding tonnage it acquired in 1987. Boosted by a number of tanker, refrigerated cargo vessel and gas carrier contracts, AESA won or- ders for 60 vessels totaling 611,914 tons. In 1987, the shipbuilding group won contracts for 19 vessels with an aggregate tonnage of 307,256 tons. One of the latest con- tracts won by AESA is for two 140,000-dwt Suezmax crude carriers for Seatankers Management.

West German shipowners increased their orders for new ships, citing an improved shipping outlook and the creation of a second German ship register.

According to the German Ship- owners Association, its members or- dered 22 vessels totaling 530,500 grt from January to mid-April. The tonnage figure exceeded all German ship orders in 1987 and 1988.

One of the beneficiaries of the increased orders is the West Ger- man shipyard Schichau See- beckwerft. Besides being busy with a number of conversions, the yard has an impressive list of new construction. Among its newbuild- ings, Schichau Seebeckwerft launched the 35,000-grt jumbo-ferry 27 Skudehavnsvej, DK-2100 Copenhagen, Denmark Tel.: +45 1 29 12 66, Telex: 19 730, Telefax: +45 1 29 60 90

Wll service your evaporator wherever you are.Well, almost Aqua-Chem will go almost anywhere to repair or overhaul your evaporator. And we'll do an expert job, because we've been designing and manu- facturing evaporators tor 50 years.

We'll quickly diagnose your problem and find a solution. Get original equipment parts on demand. \nd offer you a longer service warranty.

VESTA incinerators come in different si- zes which are capable of handling sludge oil and solid waste of ships ranging from smaller vessels to passenger liners.

The incinerators can also be delivered as a fully containerized unit, complete with all necessary connections and ready for operation.

THE MOST EFFECTIVE WAY TO COMPLY WITH

ATLAS MAXI 25 S is the complete solid waste disposal unit, equipped with all the automatic regulating and safety de- vices which are necessary for perfect functioning year after year.