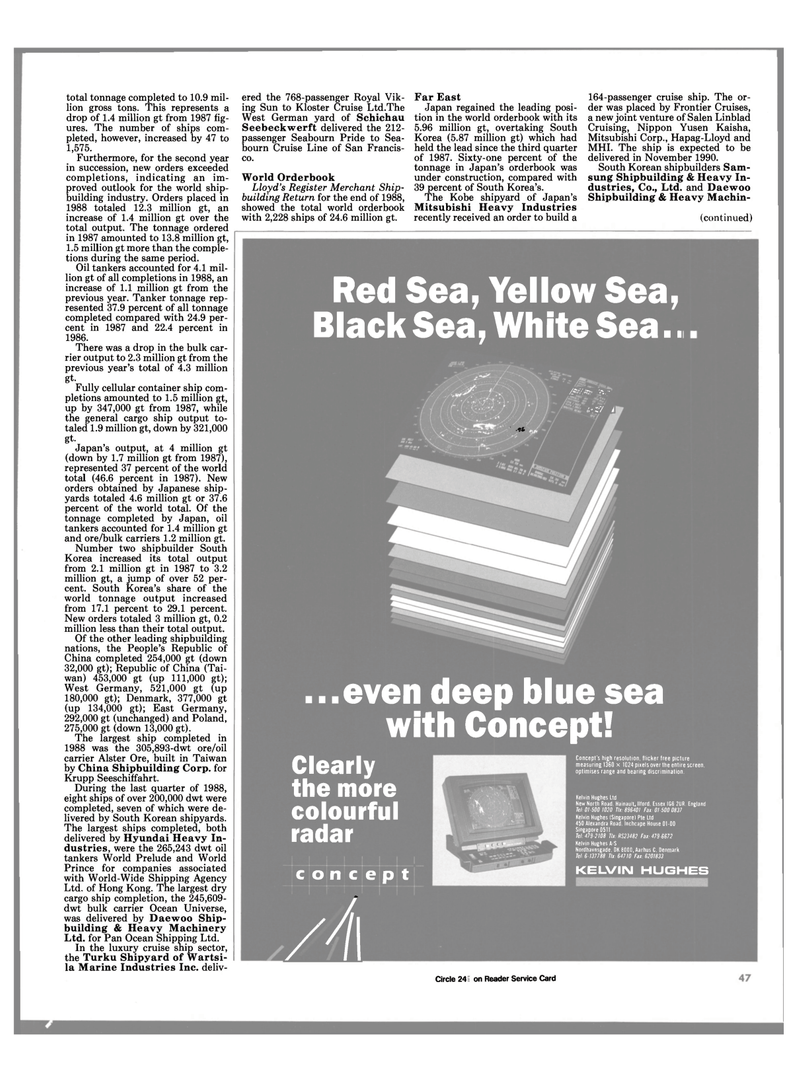 Furthermore, for the second year in succession, new orders exceeded completions, indicating an im- proved outlook for the world ship- building industry. Orders placed in 1988 totaled 12.3 million gt, an increase of 1.4 million gt over the total output. The tonnage ordered in 1987 amounted to 13.8 million gt, 1.5 million gt more than the comple- tions during the same period.

There was a drop in the bulk car- rier output to 2.3 million gt from the previous year's total of 4.3 million gt-

Of the other leading shipbuilding nations, the People's Republic of

The largest ship completed in 1988 was the 305,893-dwt ore/oil carrier Alster Ore, built in Taiwan by China Shipbuilding Corp. for

During the last quarter of 1988, eight ships of over 200,000 dwt were completed, seven of which were de- livered by South Korean shipyards.

The largest ships completed, both delivered by Hyundai Heavy In- dustries, were the 265,243 dwt oil tankers World Prelude and World

Lloyd's Register Merchant Ship- building Return for the end of 1988, showed the total world orderbook with 2,228 ships of 24.6 million gt.

Japan regained the leading posi- tion in the world orderbook with its 5.96 million gt, overtaking South

Korea (5.87 million gt) which had held the lead since the third quarter of 1987. Sixty-one percent of the tonnage in Japan's orderbook was under construction, compared with 39 percent of South Korea's.

The Kobe shipyard of Japan's

Mitsubishi Heavy Industries recently received an order to build a 164-passenger cruise ship. The or- der was placed by Frontier Cruises, a new joint venture of Salen Linblad

MHI. The ship is expected to be delivered in November 1990.