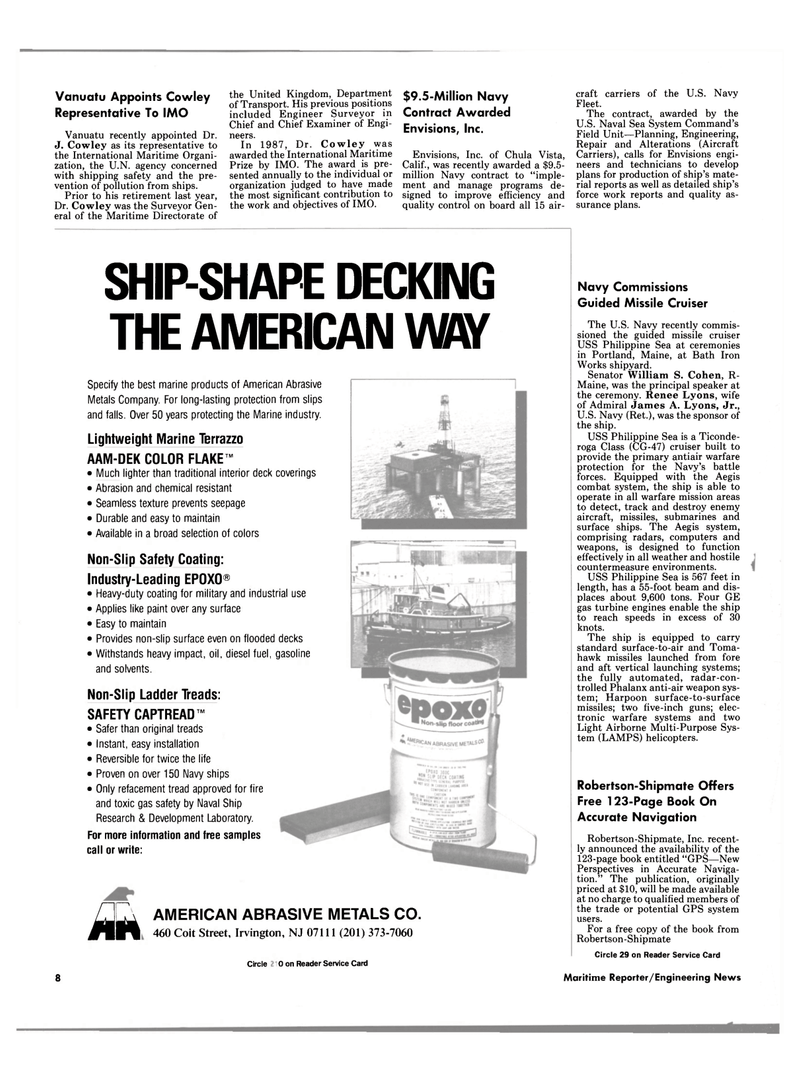 J. Cowley as its representative to the International Maritime Organi- zation, the U.N. agency concerned with shipping safety and the pre- vention of pollution from ships.

Prior to his retirement last year,

Dr. Cowley was the Surveyor Gen- eral of the Maritime Directorate of the United Kingdom, Department of Transport. His previous positions included Engineer Surveyor in

In 1987, Dr. Cowley was awarded the International Maritime

Prize by IMO. The award is pre- sented annually to the individual or organization judged to have made the most significant contribution to the work and objectives of IMO. $9.5-Million Navy

Calif., was recently awarded a $9.5- million Navy contract to "imple- ment and manage programs de- signed to improve efficiency and quality control on board all 15 air- craft carriers of the U.S. Navy

The contract, awarded by the

Maine, was the principal speaker at the ceremony. Renee Lyons, wife of Admiral James A. Lyons, Jr.,

USS Philippine Sea is a Ticonde- roga Class (CG-47) cruiser built to provide the primary antiair warfare protection for the Navy's battle forces. Equipped with the Aegis combat system, the ship is able to operate in all warfare mission areas to detect, track and destroy enemy aircraft, missiles, submarines and surface ships. The Aegis system, comprising radars, computers and weapons, is designed to function effectively in all weather and hostile countermeasure environments.

USS Philippine Sea is 567 feet in length, has a 55-foot beam and dis- places about 9,600 tons. Four GE gas turbine engines enable the ship to reach speeds in excess of 30 knots.

Perspectives in Accurate Naviga- tion." The publication, originally priced at $10, will be made available at no charge to qualified members of the trade or potential GPS system users.

For a free copy of the book from

Metals Company. For long-lasting protection from slips and falls. Over 50 years protecting the Marine industry.