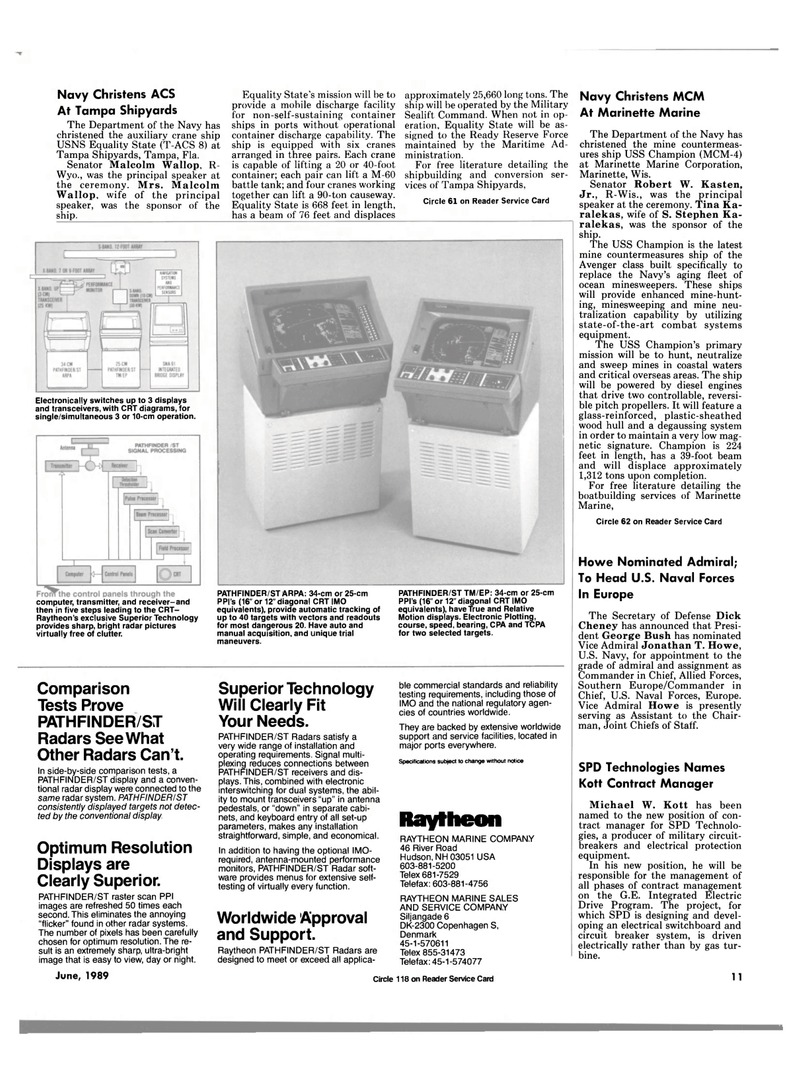 The Department of the Navy has christened the auxiliary crane ship

Wyo., was the principal speaker at the ceremony. Mrs. Malcolm

Wallop, wife of the principal speaker, was the sponsor of the ship.

Equality State's mission will be to provide a mobile discharge facility for non-self-sustaining container ships in ports without operational container discharge capability. The ship is equipped with six cranes arranged in three pairs. Each crane is capable of lifting a 20 or 40-foot container; each pair can lift a M-60 battle tank; and four cranes working together can lift a 90-ton causeway.

Equality State is 668 feet in length, has a beam of 76 feet and displaces

Electronically switches up to 3 displays and transceivers, with CRT diagrams, for single/simultaneous 3 or 10-cm operation. computer, transmitter, and receiver-and then in five steps leading to the CRT-

In side-by-side comparison tests, a

PATHFINDER/ST display and a conven- tional radar display were connected to the same radar system. PATHFINDER/ST consistently displayed targets not detec- ted by the conventional display.

PATHFINDER/ST raster scan PPI images are refreshed 50 times each second. This eliminates the annoying "flicker" found in other radar systems.

The number of pixels has been carefully chosen for optimum resolution. The re- sult is an extremely sharp, ultra-bright image that is easy to view, day or night.

PPI's (16" or 12" diagonal CRT IMO equivalents), provide automatic tracking of up to 40 targets with vectors and readouts for most dangerous 20. Have auto and manual acquisition, and unique trial maneuvers.

PATHFINDER/ST receivers and dis- plays. This, combined with electronic interswitching for dual systems, the abil- ity to mount transceivers "up" in antenna pedestals, or "down" in separate cabi- nets, and keyboard entry of all set-up parameters, makes any installation straightforward, simple, and economical.

In addition to having the optional IMO- required, antenna-mounted performance monitors, PATHFINDER/ST Radar soft- ware provides menus for extensive self- testing of virtually every function.

Raytheon PATHFINDER/ST Radars are designed to meet or exceed all applica- approximately 25,660 long tons. The ship will be operated by the Military

Sealift Command. When not in op- eration, Equality State will be as- signed to the Ready Reserve Force maintained by the Maritime Ad- ministration.

For free literature detailing the shipbuilding and conversion ser- vices of Tampa Shipyards,

PPI's (16" or 12" diagonal CRT IMO equivalents), have True and Relative

IMO and the national regulatory agen- cies of countries worldwide.

They are backed by extensive worldwide support and service facilities, located in major ports everywhere.

Specifications subject to change without notice

The Department of the Navy has christened the mine countermeas- ures ship USS Champion (MCM-4) at Marinette Marine Corporation,

The USS Champion is the latest mine countermeasures ship of the

The USS Champion's primary mission will be to hunt, neutralize and sweep mines in coastal waters and critical overseas areas. The ship will be powered by diesel engines that drive two controllable, reversi- ble pitch propellers. It will feature a glass-reinforced, plastic-sheathed wood hull and a degaussing system in order to maintain a very low mag- netic signature. Champion is 224 feet in length, has a 39-foot beam and will displace approximately 1,312 tons upon completion.

For free literature detailing the boatbuilding services of Marinette

The Secretary of Defense Dick

Cheney has announced that Presi- dent George Bush has nominated

U.S. Navy, for appointment to the grade of admiral and assignment as

Vice Admiral Howe is presently serving as Assistant to the Chair- man, Joint Chiefs of Staff.

Michael W. Kott has been named to the new position of con- tract manager for SPD Technolo- gies, a producer of military circuit- breakers and electrical protection equipment.

In his new position, he will be responsible for the management of all phases of contract management on the G.E. Integrated Electric

Drive Program. The project, for which SPD is designing and devel- oping an electrical switchboard and circuit breaker system, is driven electrically rather than by gas tur- bine. 11 Circle 118 on Reader Service Card