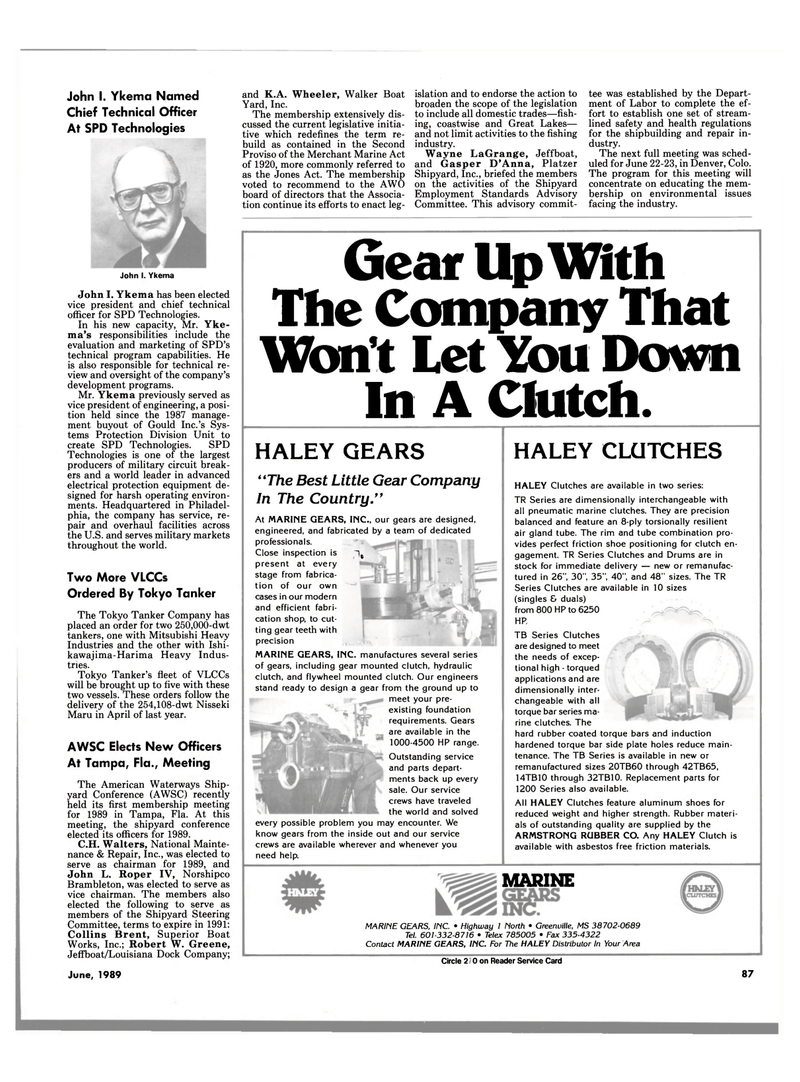 John I. Ykema has been elected vice president and chief technical officer for SPD Technologies.

In his new capacity, Mr. Yke- ma's responsibilities include the evaluation and marketing of SPD's technical program capabilities. He is also responsible for technical re- view and oversight of the company's development programs.

Technologies is one of the largest producers of military circuit break- ers and a world leader in advanced electrical protection equipment de- signed for harsh operating environ- ments. Headquartered in Philadel- phia, the company has service, re- pair and overhaul facilities across the U.S. and serves military markets throughout the world.

The Tokyo Tanker Company has placed an order for two 250,000-dwt tankers, one with Mitsubishi Heavy

Industries and the other with Ishi- kawajima-Harima Heavy Indus- tries.

Tokyo Tanker's fleet of VLCCs will be brought up to five with these two vessels. These orders follow the delivery of the 254,108-dwt Nisseki

Maru in April of last year.

The American Waterways Ship- yard Conference (AWSC) recently held its first membership meeting for 1989 in Tampa, Fla. At this meeting, the shipyard conference elected its officers for 1989.

C.H. Walters, National Mainte- nance & Repair, Inc., was elected to serve as chairman for 1989, and

Brambleton, was elected to serve as vice chairman. The members also elected the following to serve as members of the Shipyard Steering

Proviso of the Merchant Marine Act of 1920, more commonly referred to as the Jones Act. The membership voted to recommend to the AWO board of directors that the Associa- tion continue its efforts to enact leg- islation and to endorse the action to broaden the scope of the legislation to include all domestic trades—fish- ing, coastwise and Great Lakes— and not limit activities to the fishing industry.

Shipyard, Inc., briefed the members on the activities of the Shipyard

Committee. This advisory commit- tee was established by the Depart- ment of Labor to complete the ef- fort to establish one set of stream- lined safety and health regulations for the shipbuilding and repair in- dustry.

The next full meeting was sched- uled for June 22-23, in Denver, Colo.

The program for this meeting will concentrate on educating the mem- bership on environmental issues facing the industry.

Gear Up With The Company That

Won't Let You Down In A Clutch.

At MARINE GEARS, INC., our gears are designed, engineered, and fabricated by a team of dedicated professionals.

Close inspection is ' ( present at every stage from fabrica- tion of our own cases in our modern and efficient fabri- cation shop, to cut- ting gear teeth with precision

MARINE GEARS, INC. manufactures several series of gears, including gear mounted clutch, hydraulic clutch, and flywheel mounted clutch. Our engineers stand ready to design a gear from the ground up to meet your pre- existing foundation requirements. Gears are available in the 1000-4500 HP range.

Outstanding service and parts depart- ments back up every sale. Our service crews have traveled the world and solved every possible problem you may encounter. We know gears from the inside out and our service crews are available wherever and whenever you need help.

TR Series are dimensionally interchangeable with all pneumatic marine clutches. They are precision balanced and feature an 8-ply torsionally resilient air gland tube. The rim and tube combination pro- vides perfect friction shoe positioning for clutch en- gagement. TR Series Clutches and Drums are in stock for immediate delivery — new or remanufac- tured in 26", 30", 35", 40", and 48" sizes. The TR

All HALEY Clutches feature aluminum shoes for reduced weight and higher strength. Rubber materi- als of outstanding quality are supplied by the

Contact MARINE GEARS, INC. For The HALEY Distributor In Your Area