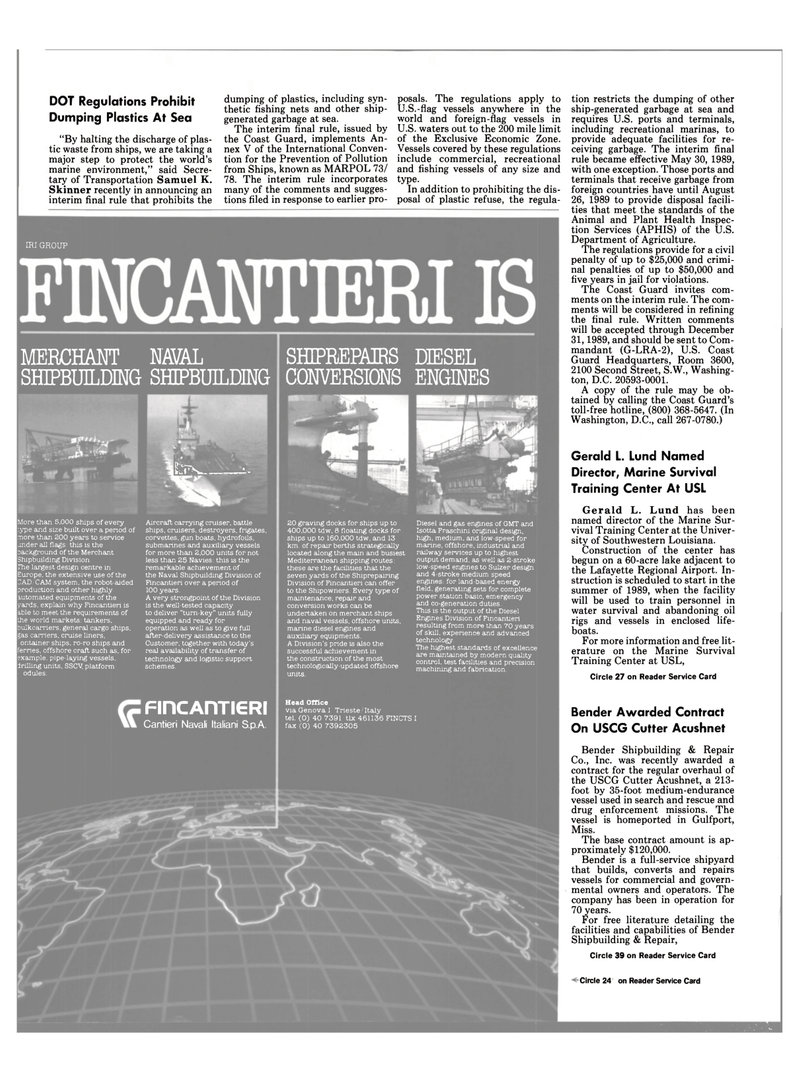 Dumping Plastics At Sea "By halting the discharge of plas- tic waste from ships, we are taking a major step to protect the world's marine environment," said Secre- tary of Transportation Samuel K.

Skinner recently in announcing an interim final rule that prohibits the dumping of plastics, including syn- thetic fishing nets and other ship- generated garbage at sea.

The interim final rule, issued by the Coast Guard, implements An- nex V of the International Conven- tion for the Prevention of Pollution from Ships, known as MARPOL 73/ 78. The interim rule incorporates many of the comments and sugges- tions filed in response to earlier pro- posals. The regulations apply to

U.S. waters out to the 200 mile limit of the Exclusive Economic Zone.

Vessels covered by these regulations include commercial, recreational and fishing vessels of any size and type.

In addition to prohibiting the dis- posal of plastic refuse, the regula- mi GROUP

CONVERSIONS ENGINES tion restricts the dumping of other ship-generated garbage at sea and requires U.S. ports and terminals, including recreational marinas, to provide adequate facilities for re- ceiving garbage. The interim final rule became effective May 30, 1989, with one exception. Those ports and terminals that receive garbage from foreign countries have until August 26, 1989 to provide disposal facili- ties that meet the standards of the

The regulations provide for a civil penalty of up to $25,000 and crimi- nal penalties of up to $50,000 and five years in jail for violations.

The Coast Guard invites com- ments on the interim rule. The com- ments will be considered in refining the final rule. Written comments will be accepted through December 31,1989, and should be sent to Com- mandant (G-LRA-2), U.S. Coast

More than 5.000 ships of every :ype and size built over a period of more than 200 years to service under all flags: this is the oackground of the Merchant

Europe, the extensive use of the

CAD CAM system, the robot-aided production and other highly automated equipments of the yards, explain why Fincantieri is able to meet the requirements of the world markets: tankers, bulkcaiTiers. general cargo ships, gas carriers, cruise liners, container ships, ro-ro ships and ferries, offshore craft such as, for example, pipe-laying vessels.

Aircraft carrying cruiser, battle ships, cruisers, destroyers, frigates, corvettes, gun boats, hydrofoils, submarines and auxiliary vessels for more than 2,000 units for not less than 25 Navies: this is the remarkable achievement of the Naval Shipbuilding Division of

Fincantieri over a period of 100 years.

Mediterranean shipping routes: these are the facilities that the seven yards of the Shiprepairing

Division of Fincantieri can offer to the Shipowners. Every type of maintenance, repair and conversion works can be undertaken on merchant ships and naval vessels, offshore units, marine diesel engines and auxiliary equipments.

A Division's pride is also the successful achievement in the construction of the most technologically-updated offshore units.

Diesel and gas engines of GMT and

This is the output of the Diesel

Engines Division of Fincantieri resulting from more than 70 years of skill, experience and advanced technology.

The highest standards of excellence are maintained by modern quality control, test facilities and precision machining and fabrication.

Gerald L. Lund has been named director of the Marine Sur- vival Training Center at the Univer- sity of Southwestern Louisiana.

Construction of the center has begun on a 60-acre lake adjacent to the Lafayette Regional Airport. In- struction is scheduled to start in the summer of 1989, when the facility will be used to train personnel in water survival and abandoning oil rigs and vessels in enclosed life- boats.

For more information and free lit- erature on the Marine Survival

Co., Inc. was recently awarded a contract for the regular overhaul of the USCG Cutter Acushnet, a 213- foot by 35-foot medium-endurance vessel used in search and rescue and drug enforcement missions. The vessel is homeported in Gulfport,

Bender is a full-service shipyard that builds, converts and repairs vessels for commercial and govern- mental owners and operators. The company has been in operation for 70 years.

For free literature detailing the facilities and capabilities of Bender