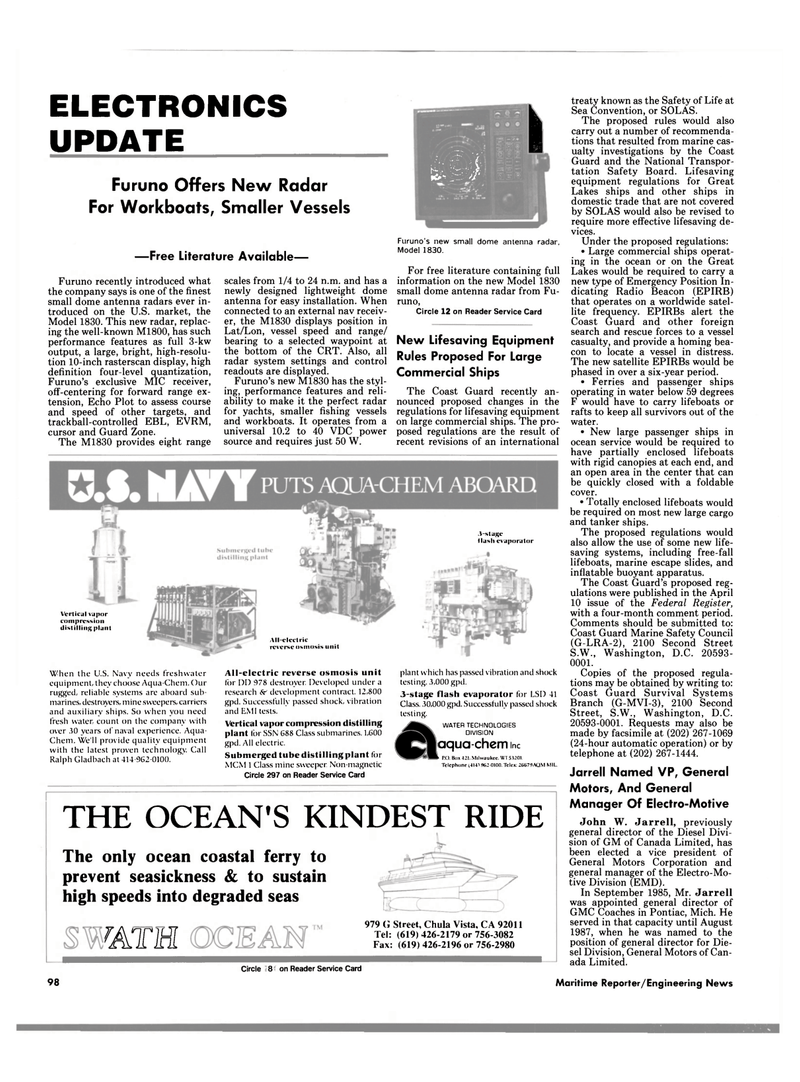 Furuno recently introduced what the company says is one of the finest small dome antenna radars ever in- troduced on the U.S. market, the

When the U.S. Navy needs freshwater equipment, they choose Aqua-Chem. Our rugged, reliable systems are aboard sub- marines, destroyers, mine sweepers, carriers and auxiliary ships. So when you need fresh water, count on the company with over 30 years of naval experience. Aqua-

Circle 297 on Reader Service Card i i

I scales from 1/4 to 24 n.m. and has a newly designed lightweight dome antenna for easy installation. When connected to an external nav receiv- er, the M1830 displays position in

Lat/Lon, vessel speed and range/ bearing to a selected waypoint at the bottom of the CRT. Also, all radar system settings and control readouts are displayed.

Furuno's new M1830 has the styl- ing, performance features and reli- ability to make it the perfect radar for yachts, smaller fishing vessels and workboats. It operates from a universal 10.2 to 40 VDC power source and requires just 50 W.

The Coast Guard recently an- nounced proposed changes in the regulations for lifesaving equipment on large commercial ships. The pro- posed regulations are the result of recent revisions of an international plant which has passed vibration and shock testing. 3,000 gpd. 3-stage flash evaporator for LSD 41

Guard and the National Transpor- tation Safety Board. Lifesaving equipment regulations for Great

Lakes ships and other ships in domestic trade that are not covered by SOLAS would also be revised to require more effective lifesaving de- vices.

Under the proposed regulations: • Large commercial ships operat- ing in the ocean or on the Great

Lakes would be required to carry a new type of Emergency Position In- dicating Radio Beacon (EPIRB) that operates on a worldwide satel- lite frequency. EPIRBs alert the

Coast Guard and other foreign search and rescue forces to a vessel casualty, and provide a homing bea- con to locate a vessel in distress.

The new satellite EPIRBs would be phased in over a six-year period. • Ferries and passenger ships operating in water below 59 degrees

The proposed regulations would also allow the use of some new life- saving systems, including free-fall lifeboats, marine escape slides, and inflatable buoyant apparatus.

The Coast Guard's proposed reg- ulations were published in the April 10 issue of the Federal Register, with a four-month comment period.

Comments should be submitted to:

Copies of the proposed regula- tions may be obtained by writing to:

John W. Jarrell, previously general director of the Diesel Divi- sion of GM of Canada Limited, has been elected a vice president of

In September 1985, Mr. Jarrell was appointed general director of

GMC Coaches in Pontiac, Mich. He served in that capacity until August 1987, when he was named to the position of general director for Die- sel Division, General Motors of Can- ada Limited.