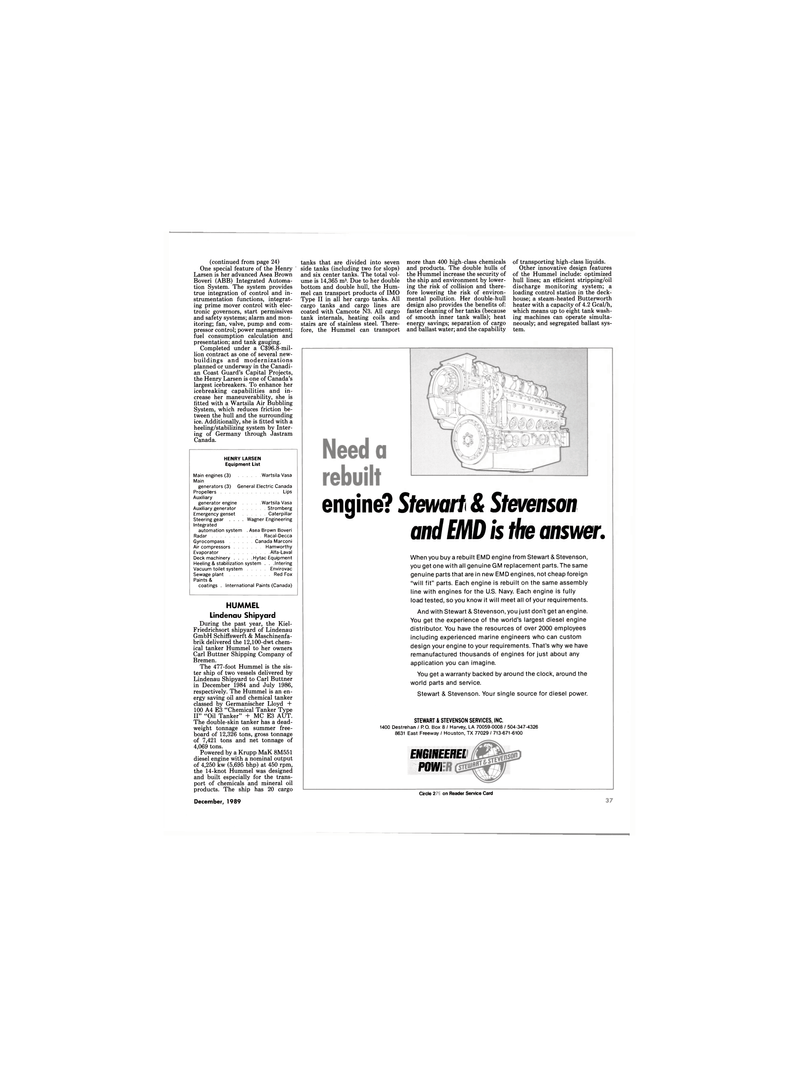 One special feature of the Henry

Larsen is her advanced Asea Brown

Completed under a C$96.8-mil- lion contract as one of several new- buildings and modernizations planned or underway in the Canadi- an Coast Guard's Capital Projects, the Henry Larsen is one of Canada's largest icebreakers. To enhance her icebreaking capabilities and in- crease her maneuverability, she is fitted with a Wartsila Air Bubbling

System, which reduces friction be- tween the hull and the surrounding ice. Additionally, she is fitted with a heeling/stabilizing system by Inter- ing of Germany through Jas tram

During the past year, the Kiel-

Lindenau Shipyard to Carl Buttner in December 1984 and July 1986, respectively. The Hummel is an en- ergy saving oil and chemical tanker classed by Germanischer Lloyd + 100 A4 E3 "Chemical Tanker Type

Powered by a Krupp MaK 8M551 diesel engine with a nominal output of 4,250 kw (5,695 bhp) at 450 rpm, the 14-knot Hummel was designed and built especially for the trans- port of chemicals and mineral oil products. The ship has 20 cargo tanks that are divided into seven side tanks (including two for slops) and six center tanks. The total vol- ume is 14,365 m3. Due to her double bottom and double hull, the Hum- mel can transport products of IMO

Type II in all her cargo tanks. All cargo tanks and cargo lines are coated with Camcote N3. All cargo tank internals, heating coils and stairs are of stainless steel. There- fore, the Hummel can transport more than 400 high-class chemicals and products. The double hulls of the Hummel increase the security of the ship and environment by lower- ing the risk of collision and there- fore lowering the risk of environ- mental pollution. Her double-hull design also provides the benefits of: faster cleaning of her tanks (because of smooth inner tank walls); heat energy savings; separation of cargo and ballast water; and the capability of transporting high-class liquids.

Other innovative design features of the Hummel include: optimized hull lines; an efficient stripping/oil discharge monitoring system; a loading control station in the deck- house; a steam-heated Butterworth heater with a capacity of 4.2 Gcal/h, which means up to eight tank wash- ing machines can operate simulta- neously; and segregated ballast sys- tem. engine? Stewart & Stevenson and EMD is the answer.

When you buy a rebuilt EMD engine from Stewart & Stevenson, you get one with all genuine GM replacement parts. The same genuine parts that are in new EMD engines, not cheap foreign "will fit" parts. Each engine is rebuilt on the same assembly line with engines for the U.S. Navy. Each engine is fully load tested, so you know it will meet all of your requirements.

And with Stewart & Stevenson, you just don't get an engine.

You get the experience of the world's largest diesel engine distributor. You have the resources of over 2000 employees including experienced marine engineers who can custom design your engine to your requirements. That's why we have remanufactured thousands of engines for just about any application you can imagine.

You get a warranty backed by around the clock, around the world parts and service.