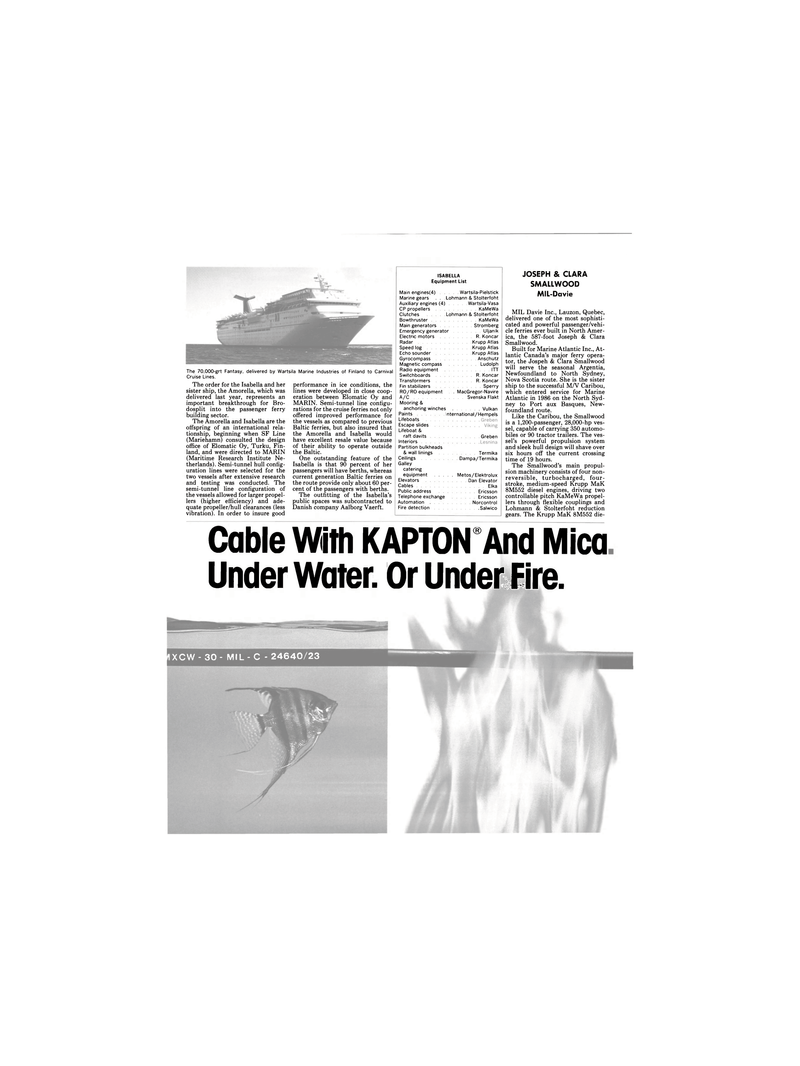 The 70,000-grt Fantasy, delivered by Wartsila Marine Industries of Finland to Carnival

The order for the Isabella and her sister ship, the Amorella, which was delivered last year, represents an important breakthrough for Bro- dosplit into the passenger ferry building sector.

The Amorella and Isabella are the offspring of an international rela- tionship, beginning when SF Line (Mariehamn) consulted the design office of Elomatic Oy, Turku, Fin- land, and were directed to MARIN (Maritime Research Institute Ne- therlands). Semi-tunnel hull config- uration lines were selected for the two vessels after extensive research and testing was conducted. The semi-tunnel line configuration of the vessels allowed for larger propel- lers (higher efficiency) and ade- quate propeller/hull clearances (less vibration). In order to insure good performance in ice conditions, the lines were developed in close coop- eration between Elomatic Oy and

MARIN. Semi-tunnel line configu- rations for the cruise ferries not only offered improved performance for the vessels as compared to previous

Baltic ferries, but also insured that the Amorella and Isabella would have excellent resale value because of their ability to operate outside the Baltic.

One outstanding feature of the

Isabella is that 90 percent of her passengers will have berths, whereas current generation Baltic ferries on the route provide only about 60 per- cent of the passengers with berths.

The outfitting of the Isabella's public spaces was subcontracted to

Nova Scotia route. She is the sister ship to the successful M/V Caribou, which entered service for Marine

Like the Caribou, the Smallwood is a 1,200-passenger, 28,000-hp ves- sel, capable of carrying 350 automo- biles or 90 tractor trailers. The ves- sel's powerful propulsion system and sleek hull design will shave over six hours off the current crossing time of 19 hours.

Cable With KAPTON And Mica

Under Water. Or Under Fire.