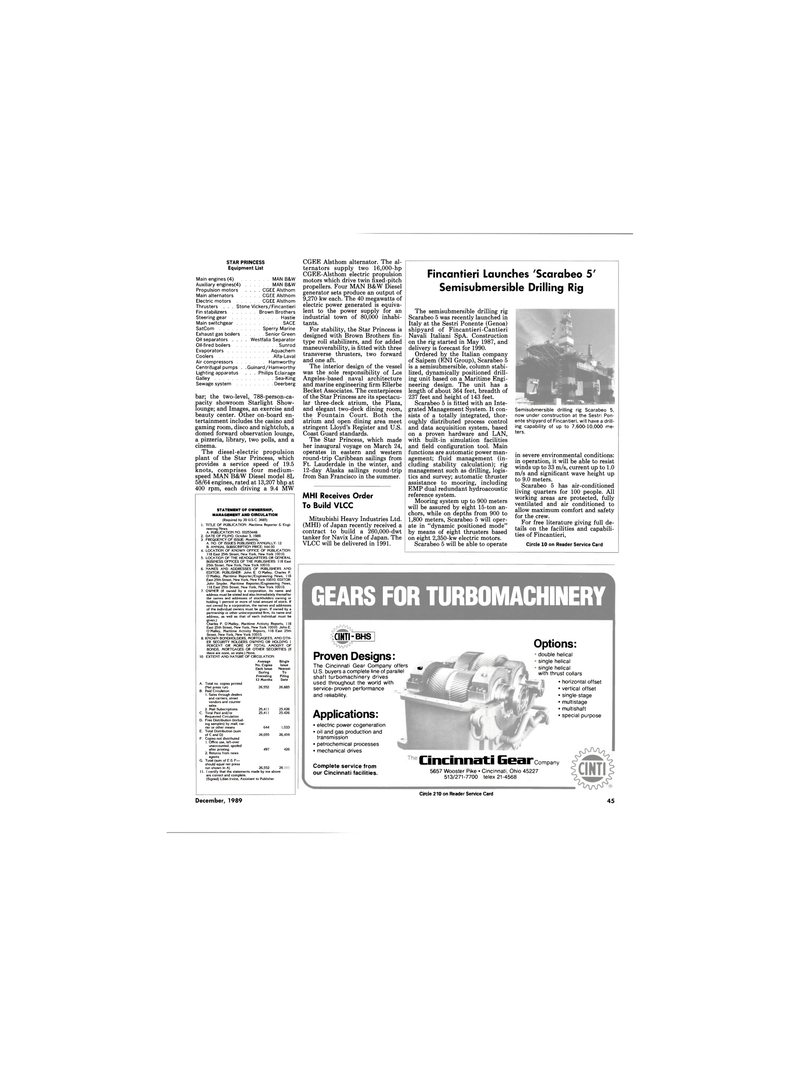 A. NO. OF ISSUES PUBLISHED ANNUALLY: 12

John Snyder, Maritime Reporter/Engineering News, 118 East 25th Street, New York. New York 10010. 7. OWNER (If owned by a corporation, its name and address must be stated and also immediately thereafter the names and addresses of stockholders owning or holding 1 percent or more of total amount of stock. If not owned by a corporation, the names and addresses of the individual owners must be given. If owned by a partnership or other unincorporated firm, its name and address, as well as that of each individual must be given.)

PERCENT OR MORE OF TOTAL AMOUNT OF

BONDS. MORTGAGES OR OTHER SECURITIES (If there are none, so state.) None. 10 EXTENT AND NATURE OF CIRCULATION:

G. Total (sum of E & F— should equal net press run shown in A) 26,552 26 11. I certify that the statements made by me above are correct and complete. (Signed) Lilian Irvine, Assistant to Publisher

For stability, the Star Princess is designed with Brown Brothers fin- type roll stabilizers, and for added maneuverability, is fitted with three transverse thrusters, two forward and one aft.

Becket Associates. The centerpieces of the Star Princess are its spectacu- lar three-deck atrium, the Plaza, and elegant two-deck dining room, the Fountain Court. Both the atrium and open dining area meet stringent Lloyd's Register and U.S.

The Star Princess, which made her inaugural voyage on March 24, operates in eastern and western round-trip Caribbean sailings from

Ft. Lauderdale in the winter, and 12-day Alaska sailings round-trip from San Francisco in the summer.

Mitsubishi Heavy Industries Ltd. (MHI) of Japan recently received a contract to build a 260,000-dwt tanker for Navix Line of Japan. The

Scarabeo 5 was recently launched in

Italy at the Sestri Ponente (Genoa) shipyard of Fincantieri-Cantieri

Navali Italiani SpA. Construction on the rig started in May 1987, and delivery is forecast for 1990.

Ordered by the Italian company of Saipem (ENI Group), Scarabeo 5 is a semisubmersible, column stabi- lized, dynamically positioned drill- ing unit based on a Maritime Engi- neering design. The unit has a length of about 364 feet, breadth of 237 feet and height of 143 feet.

Mooring system up to 900 meters will be assured by eight 15-ton an- chors, while on depths from 900 to 1,800 meters, Scarabeo 5 will oper- ate in "dynamic positioned mode" by means of eight thrusters based on eight 2,350-kw electric motors.

Scarabeo 5 will be able to operate

Semisubmersible drilling rig Scarabeo 5, now under construction at the Sestri Pon- ente shipyard of Fincantieri, will have a drill- ing capability of up to 7,600-10,000 me- ters. in severe environmental conditions: in operation, it will be able to resist winds up to 33 m/s, current up to 1.0 m/s and significant wave height up to 9.0 meters.

Scarabeo 5 has air-conditioned living quarters for 100 people. All working areas are protected, fully ventilated and air conditioned to allow maximum comfort and safety for the crew.

For free literature giving full de- tails on the facilities and capabili- ties of Fincantieri,

U.S. buyers a complete line of parallel shaft turbomachinery drives used throughout the world with service-proven performance and reliability.