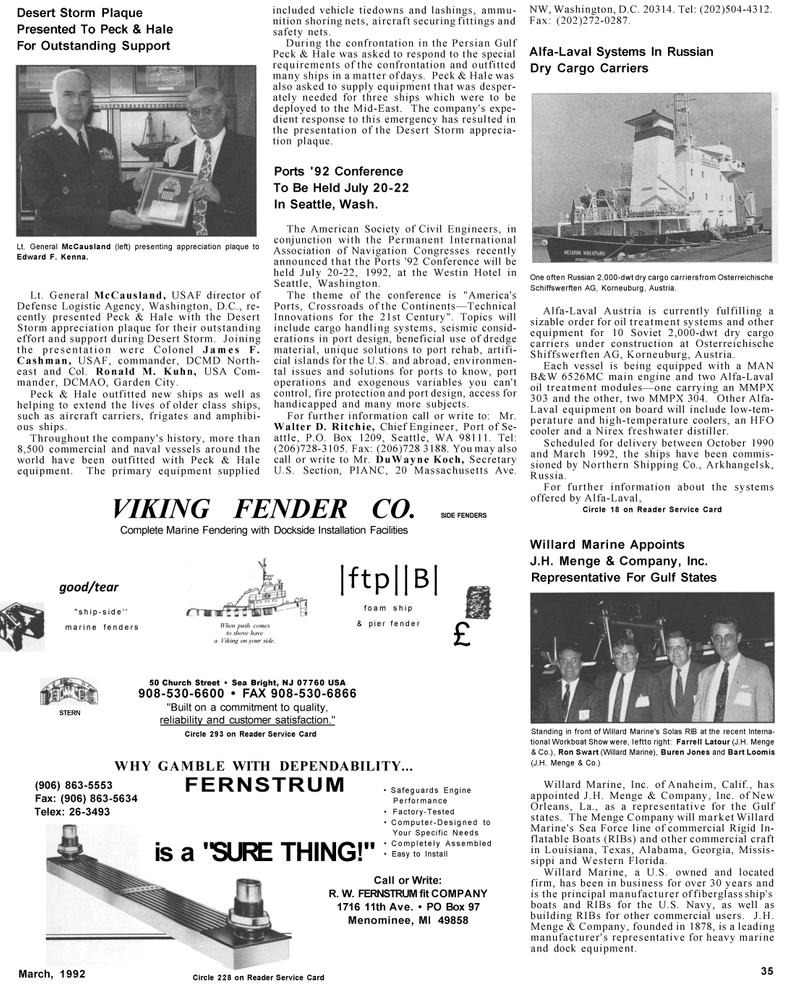 Storm appreciation plaque for their outstanding effort and support during Desert Storm. Joining the presentation were Colonel James F.

Peck & Hale outfitted new ships as well as helping to extend the lives of older class ships, such as aircraft carriers, frigates and amphibi- ous ships.

Throughout the company's history, more than 8,500 commercial and naval vessels around the world have been outfitted with Peck & Hale equipment. The primary equipment supplied included vehicle tiedowns and lashings, ammu- nition shoring nets, aircraft securing fittings and safety nets.

During the confrontation in the Persian Gulf

Peck & Hale was asked to respond to the special requirements of the confrontation and outfitted many ships in a matter of days. Peck & Hale was also asked to supply equipment that was desper- ately needed for three ships which were to be deployed to the Mid-East. The company's expe- dient response to this emergency has resulted in the presentation of the Desert Storm apprecia- tion plaque.

The American Society of Civil Engineers, in conjunction with the Permanent International

Association of Navigation Congresses recently announced that the Ports '92 Conference will be held July 20-22, 1992, at the Westin Hotel in

The theme of the conference is "America's

Ports, Crossroads of the Continents—Technical

Innovations for the 21st Century". Topics will include cargo handling systems, seismic consid- erations in port design, beneficial use of dredge material, unique solutions to port rehab, artifi- cial islands for the U.S. and abroad, environmen- tal issues and solutions for ports to know, port operations and exogenous variables you can't control, fire protection and port design, access for handicapped and many more subjects.

For further information call or write to: Mr.

SIDE FENDERS good/tear "ship-side'' marine fenders When push comes to shove have a Viking on your side. |ftp||B| foam ship & pier fender £

Alfa-Laval Austria is currently fulfilling a sizable order for oil treatment systems and other equipment for 10 Soviet 2,000-dwt dry cargo carriers under construction at Osterreichische

Each vessel is being equipped with a MAN

B&W 6526MC main engine and two Alfa-Laval oil treatment modules—one carrying an MMPX 303 and the other, two MMPX 304. Other Alfa-

Laval equipment on board will include low-tem- perature and high-temperature coolers, an HFO cooler and a Nirex freshwater distiller.

Scheduled for delivery between October 1990 and March 1992, the ships have been commis- sioned by Northern Shipping Co., Arkhangelsk,

For further information about the systems offered by Alfa-Laval,

FERNSTRUM is a "SURE THING!" • Safeguards Engine

Orleans, La., as a representative for the Gulf states. The Menge Company will market Willard

Willard Marine, a U.S. owned and located firm, has been in business for over 30 years and is the principal manufacturer of fiberglass ship's boats and RIBs for the U.S. Navy, as well as building RIBs for other commercial users. J.H.

Menge & Company, founded in 1878, is a leading manufacturer's representative for heavy marine and dock equipment. 35