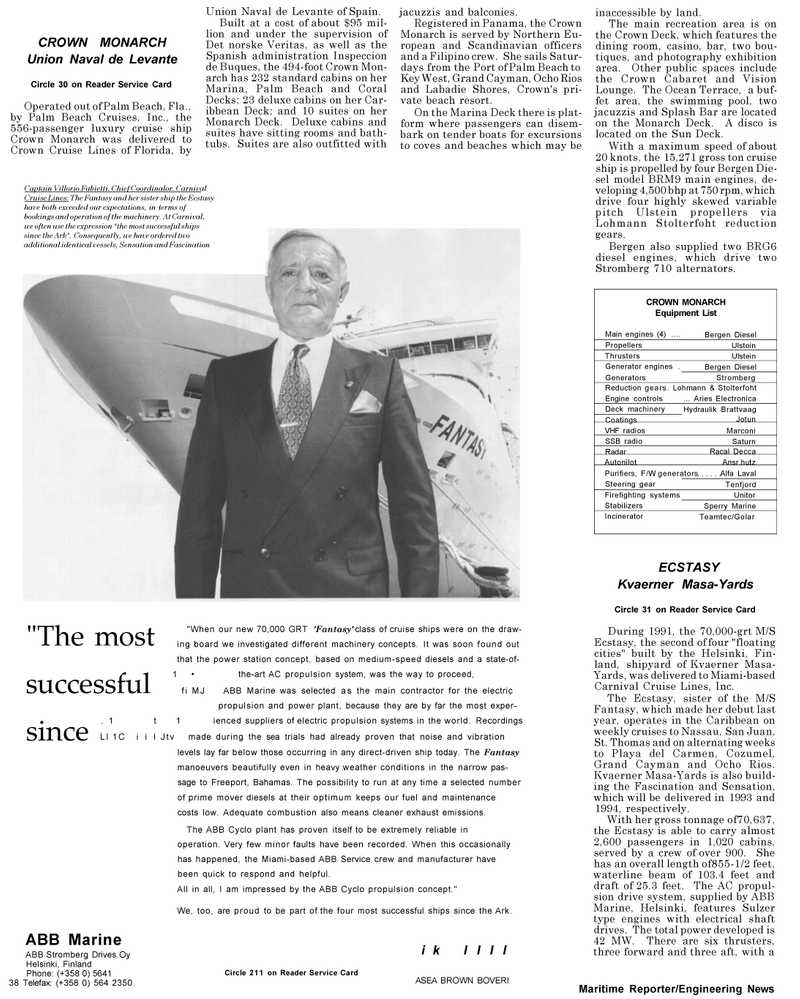 Crown Monarch was delivered to

Crown Cruise Lines of Florida, by

Det norske Veritas, as well as the

Decks; 23 deluxe cabins on her Car- ibbean Deck; and 10 suites on her

Monarch Deck. Deluxe cabins and suites have sitting rooms and bath- tubs. Suites are also outfitted with jacuzzis and balconies.

Registered in Panama, the Crown

Monarch is served by Northern Eu- ropean and Scandinavian officers and a Filipino crew. She sails Satur- days from the Port of Palm Beach to

On the Marina Deck there is plat- form where passengers can disem- bark on tender boats for excursions to coves and beaches which may be "The most successful since "When our new 70,000 GRT 'Fantasy' class of cruise ships were on the draw- ing board we investigated different machinery concepts. It was soon found out that the power station concept, based on medium-speed diesels and a state-of- 1 • the-art AC propulsion system, was the way to proceed, fi MJ ABB Marine was selected as the main contractor for the electric propulsion and power plant, because they are by far the most exper- . 1 t 1 ienced suppliers of electric propulsion systems in the world. Recordings

Ll 1C iil Jtv made during the sea trials had already proven that noise and vibration levels lay far below those occurring in any direct-driven ship today. The Fantasy manoeuvers beautifully even in heavy weather conditions in the narrow pas- sage to Freeport, Bahamas. The possibility to run at any time a selected number of prime mover diesels at their optimum keeps our fuel and maintenance costs low. Adequate combustion also means cleaner exhaust emissions.

The ABB Cyclo plant has proven itself to be extremely reliable in operation. Very few minor faults have been recorded. When this occasionally has happened, the Miami-based ABB Service crew and manufacturer have been quick to respond and helpful.

All in all, I am impressed by the ABB Cyclo propulsion concept."

We, too, are proud to be part of the four most successful ships since the Ark.

The main recreation area is on the Crown Deck, which features the dining room, casino, bar, two bou- tiques, and photography exhibition area. Other public spaces include the Crown Cabaret and Vision

Lounge. The Ocean Terrace, a buf- fet area, the swimming pool, two jacuzzis and Splash Bar are located on the Monarch Deck. A disco is located on the Sun Deck.

Yards, was delivered to Miami-based

The Ecstasy, sister of the M/S

Fantasy, which made her debut last year, operates in the Caribbean on weekly cruises to Nassau, San Juan,

Kvaerner Masa-Yards is also build- ing the Fascination and Sensation, which will be delivered in 1993 and 1994, respectively.

Cruise Lines: The Fantasy and her sister ship the Ecstasy have both exceeded our expectations, in terms of bookings and operation of the machinery. At Carnival, we often use the expression "the most successful ships since the Ark". Consequently, we have ordered two additional identical vessels, Sensation and Fascination