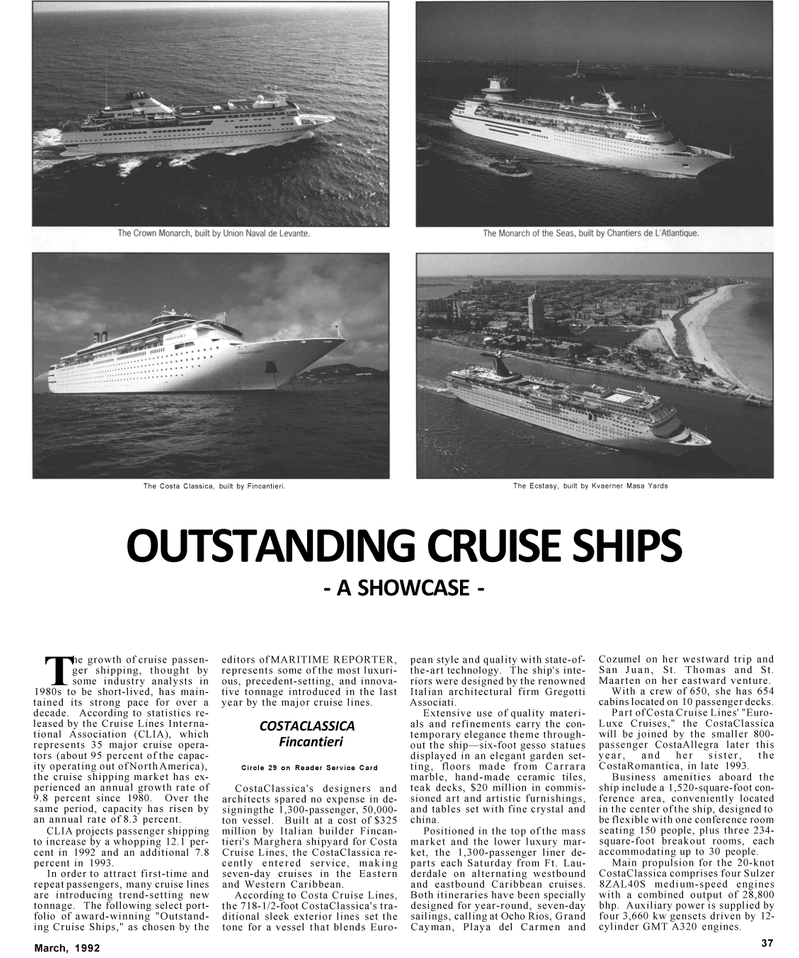 The Costa Classica, built by Fincantieri.

The growth of cruise passen-ger shipping, thought by some industry analysts in 1980s to be short-lived, has main- tained its strong pace for over a decade. According to statistics re- leased by the Cruise Lines Interna- tional Association (CLIA), which represents 35 major cruise opera- tors (about 95 percent of the capac- ity operating out of North America), the cruise shipping market has ex- perienced an annual growth rate of 9.8 percent since 1980. Over the same period, capacity has risen by an annual rate of 8.3 percent.

In order to attract first-time and repeat passengers, many cruise lines are introducing trend-setting new tonnage. The following select port- folio of award-winning "Outstand- ing Cruise Ships," as chosen by the

March, 1992 editors of MARITIME REPORTER, represents some of the most luxuri- ous, precedent-setting, and innova- tive tonnage introduced in the last year by the major cruise lines.

According to Costa Cruise Lines, the 718-1/2-foot CostaClassica's tra- ditional sleek exterior lines set the tone for a vessel that blends Euro- pean style and quality with state-of- the-art technology. The ship's inte- riors were designed by the renowned

Extensive use of quality materi- als and refinements carry the con- temporary elegance theme through- out the ship—six-foot gesso statues displayed in an elegant garden set- ting, floors made from Carrara marble, hand-made ceramic tiles, teak decks, $20 million in commis- sioned art and artistic furnishings, and tables set with fine crystal and china.

Positioned in the top of the mass market and the lower luxury mar- ket, the 1,300-passenger liner de- parts each Saturday from Ft. Lau- derdale on alternating westbound and eastbound Caribbean cruises.

Both itineraries have been specially designed for year-round, seven-day sailings, calling at Ocho Rios, Grand

Cozumel on her westward trip and

Maarten on her eastward venture.

Luxe Cruises," the CostaClassica will be joined by the smaller 800- passenger CostaAllegra later this year, and her sister, the

Business amenities aboard the ship include a 1,520-square-foot con- ference area, conveniently located in the center of the ship, designed to be flexible with one conference room seating 150 people, plus three 234- square-foot breakout rooms, each accommodating up to 30 people.

Main propulsion for the 20-knot