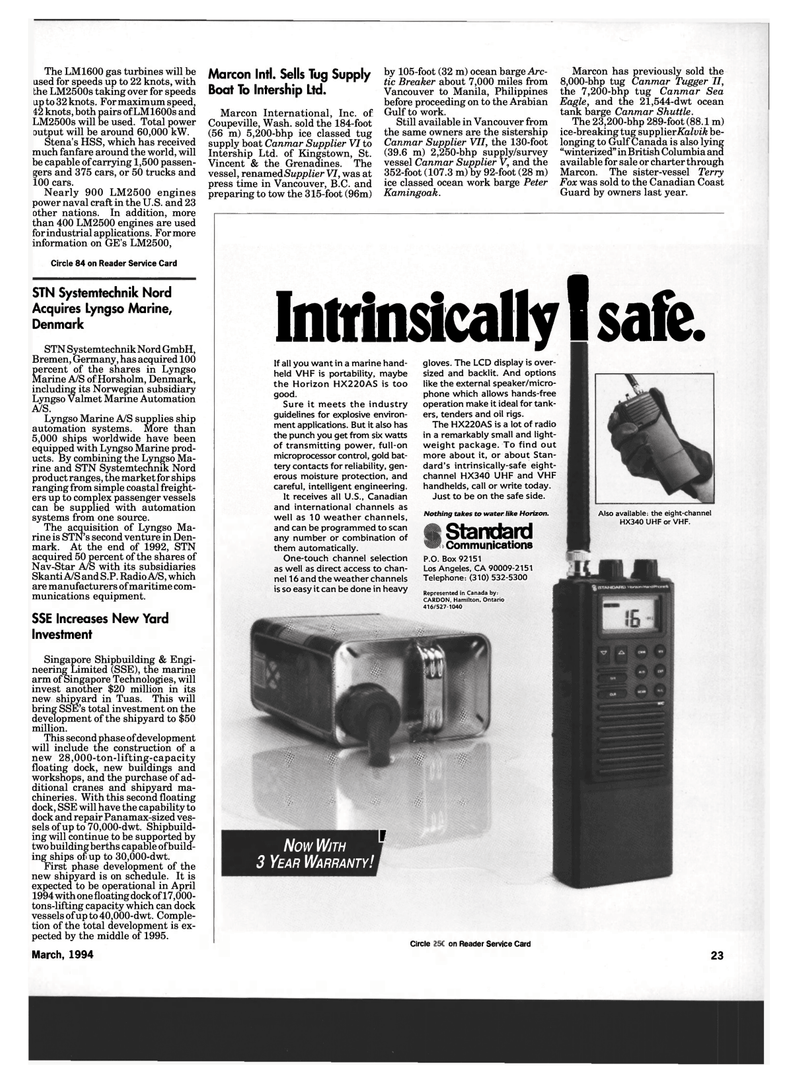 Stena's HSS, which has received much fanfare around the world, will be capable of carrying 1,500 passen- gers and 375 cars, or 50 trucks and 100 cars.

Nearly 900 LM2500 engines power naval craft in the U.S. and 23 other nations. In addition, more than 400 LM2500 engines are used for industrial applications. For more information on GE's LM2500,

Bremen, Germany, has acquired 100 percent of the shares in Lyngso

Marine A/S of Horsholm, Denmark, including its Norwegian subsidiary

Lyngso Marine A/S supplies ship automation systems. More than 5,000 ships worldwide have been equipped with Lyngso Marine prod- ucts. By combining the Lyngso Ma- rine and STN Systemtechnik Nord product ranges, the market for ships ranging from simple coastal freight- ers up to complex passenger vessels can be supplied with automation systems from one source.

The acquisition of Lyngso Ma- rine is STN's second venture in Den- mark. At the end of 1992, STN acquired 50 percent of the shares of

Nav-Star A/S with its subsidiaries

Singapore Shipbuilding & Engi- neering Limited (SSE), the marine arm of Singapore Technologies, will invest another $20 million in its new shipyard in Tuas. This will bring SSE's total investment on the development of the shipyard to $50 million.

This second phase of development will include the construction of a new 28,000-ton-lifting-capacity floating dock, new buildings and workshops, and the purchase of ad- ditional cranes and shipyard ma- chineries. With this second floating dock, SSE will have the capability to dock and repair Panamax-sized ves- sels of up to 70,000-dwt. Shipbuild- ing will continue to be supported by two building berths capable ofbuild- ing ships of up to 30,000-dwt.

First phase development of the new shipyard is on schedule. It is expected to be operational in April 1994 with one floating dock of17,000- tons-lifting capacity which can dock vessels of up to 40,000-dwt. Comple- tion of the total development is ex- pected by the middle of 1995.

Vancouver to Manila, Philippines before proceeding on to the Arabian

Still available in Vancouver from the same owners are the sistership

The 23,200-bhp 289-foot (88.1 m) ice-breaking tug supplierifoZui^ be- longing to Gulf Canada is also lying "winterized" in British Columbia and available for sale or charter through

Fox was sold to the Canadian Coast

If all you want in a marine hand- held VHF is portability, maybe the Horizon HX220AS is too good.

Sure it meets the industry guidelines for explosive environ- ment applications. But it also has the punch you get from six watts of transmitting power, full-on microprocessor control, gold bat- tery contacts for reliability, gen- erous moisture protection, and careful, intelligent engineering.

It receives all U.S., Canadian and international channels as well as 10 weather channels, and can be programmed to scan any number or combination of them automatically.

One-touch channel selection as well as direct access to chan- nel 16 and the weather channels is so easy it can be done in heavy gloves. The LCD display is over- sized and backlit. And options like the external speaker/micro- phone which allows hands-free operation make it ideal for tank- ers, tenders and oil rigs.

The HX220AS is a lot of radio in a remarkably small and light- weight package. To find out more about it, or about Stan- dard's intrinsically-safe eight- channel HX340 UHF and VHF handhelds, call or write today.

Just to be on the safe side.

Represented in Canada by:

Now WITH 3 YEAR WARRANTY! i