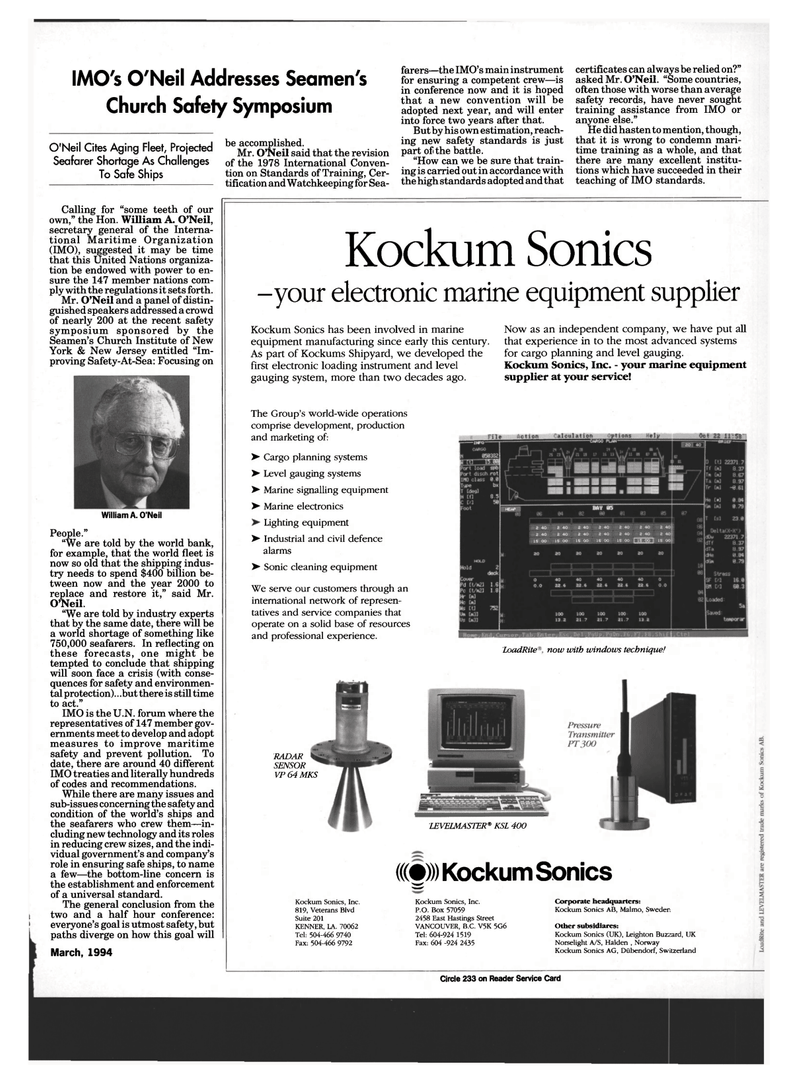 To Safe Ships be accomplished.

Mr. O'Neil said that the revision of the 1978 International Conven- tion on Standards of Training, Cer- tification and Watchkeeping for Sea- farers—the IMO's main instrument for ensuring a competent crew—is in conference now and it is hoped that a new convention will be adopted next year, and will enter into force two years after that.

But by his own estimation, reach- ing new safety standards is just part of the battle. "How can we be sure that train- ing is carried out in accordance with the high standards adopted and that certificates can always be relied on?" asked Mr. O'Neil. "Some countries, often those with worse than average safety records, have never sought training assistance from IMO or anyone else."

He did hasten to mention, though, that it is wrong to condemn mari- time training as a whole, and that there are many excellent institu- tions which have succeeded in their teaching of IMO standards.

Calling for "some teeth of our own," the Hon. William A. O'Neil, secretary general of the Interna- tional Maritime Organization (IMO), suggested it may be time that this United Nations organiza- tion be endowed with power to en- sure the 147 member nations com- ply with the regulations it sets forth.

Mr. O'Neil and a panel of distin- guished speakers addressed a crowd of nearly 200 at the recent safety symposium sponsored by the

People." "We are told by the world bank, for example, that the world fleet is now so old that the shipping indus- try needs to spend $400 billion be- tween now and the year 2000 to replace and restore it," said Mr.

O'Neil. "We are told by industry experts that by the same date, there will be a world shortage of something like 750,000 seafarers. In reflecting on these forecasts, one might be tempted to conclude that shipping will soon face a crisis (with conse- quences for safety and environmen- tal protection).. .but there is still time to act."

IMO is the U.N. forum where the representatives of 147 member gov- ernments meet to develop and adopt measures to improve maritime safety and prevent pollution. To date, there are around 40 different

IMO treaties and literally hundreds of codes and recommendations.

While there are many issues and sub-issues concerning the safety and condition of the world's ships and the seafarers who crew them—in- cluding new technology and its roles in reducing crew sizes, and the indi- vidual government's and company's role in ensuring safe ships, to name a few—the bottom-line concern is the establishment and enforcement of a universal standard.

The general conclusion from the two and a half hour conference: everyone's goal is utmost safety, but paths diverge on how this goal will

Kockum Sonics has been involved in marine equipment manufacturing since early this century.

As part of Kockums Shipyard, we developed the first electronic loading instrument and level gauging system, more than two decades ago.

Now as an independent company, we have put all that experience in to the most advanced systems for cargo planning and level gauging.

Kockum Sonics, Inc. - your marine equipment supplier at your service!

We serve our customers through an international network of represen- tatives and service companies that operate on a solid base of resources and professional experience.