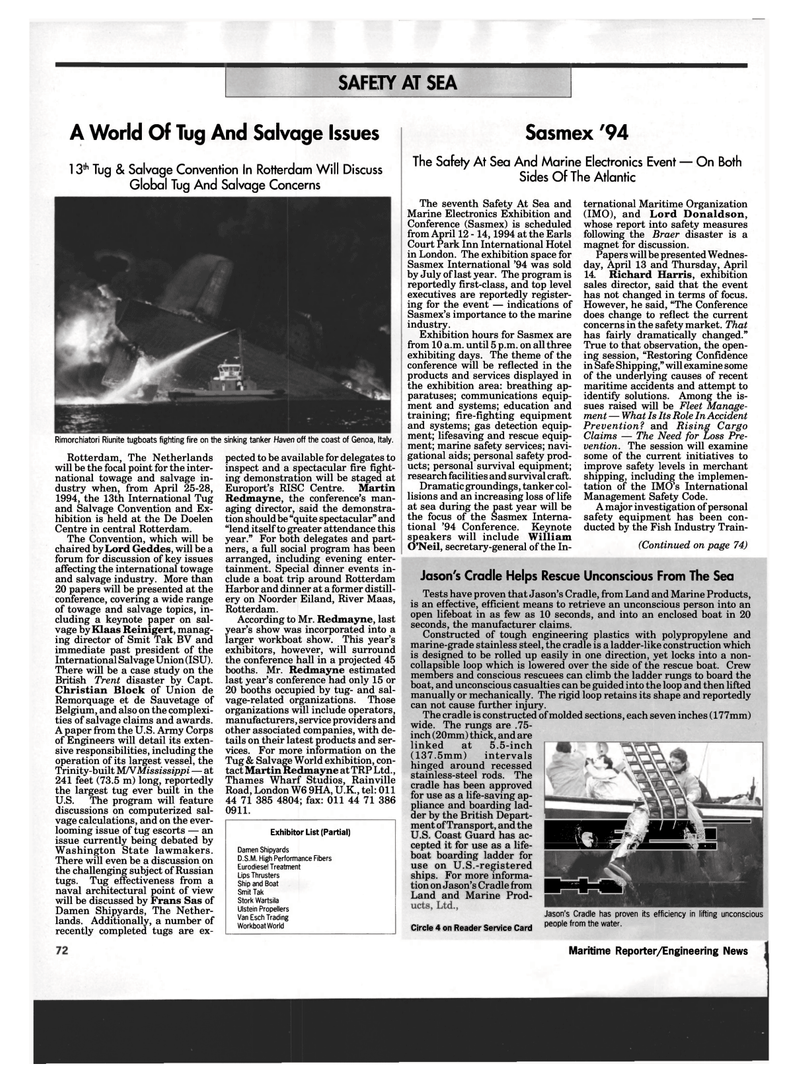 Rimorchiatori Riunite tugboats fighting fire on the sinking tanker Haven off the coast of Genoa, Italy.

Rotterdam, The Netherlands will be the focal point for the inter- national towage and salvage in- dustry when, from April 25-28, 1994, the 13th International Tug and Salvage Convention and Ex- hibition is held at the De Doelen

The Convention, which will be chaired by Lord Geddes, will be a forum for discussion of key issues affecting the international towage and salvage industry. More than 20 papers will be presented at the conference, covering a wide range of towage and salvage topics, in- cluding a keynote paper on sal- vage byKlaas Reinigert, manag- ing director of Smit Tak BV and immediate past president of the

There will be a case study on the

Belgium, and also on the complexi- ties of salvage claims and awards.

A paper from the U.S. Army Corps of Engineers will detail its exten- sive responsibilities, including the operation of its largest vessel, the

Trinity-built MTV Mississippi — at 241 feet (73.5 m) long, reportedly the largest tug ever built in the

U.S. The program will feature discussions on computerized sal- vage calculations, and on the ever- looming issue of tug escorts — an issue currently being debated by

There will even be a discussion on the challenging subject of Russian tugs. Tug effectiveness from a naval architectural point of view will be discussed by Frans Sas of

Damen Shipyards, The Nether- lands. Additionally, a number of recently completed tugs are ex- pected to be available for delegates to inspect and a spectacular fire fight- ing demonstration will be staged at

Redmayne, the conference's man- aging director, said the demonstra- tion should be "quite spectacular" and "lend itself to greater attendance this year." For both delegates and part- ners, a full social program has been arranged, including evening enter- tainment. Special dinner events in- clude a boat trip around Rotterdam

Harbor and dinner at a former distill- ery on Noorder Eiland, River Maas,

According to Mr. Redmayne, last year's show was incorporated into a larger workboat show. This year's exhibitors, however, will surround the conference hall in a projected 45 booths. Mr. Redmayne estimated last year's conference had only 15 or 20 booths occupied by tug- and sal- vage-related organizations. Those organizations will include operators, manufacturers, service providers and other associated companies, with de- tails on their latest products and ser- vices. For more information on the

The Safety At Sea And Marine Electronics Event — On Both

Sides Of The Atlantic

The seventh Safety At Sea and

Sasmex International '94 was sold by July of last year. The program is reportedly first-class, and top level executives are reportedly register- ing for the event — indications of

Sasmex's importance to the marine industry.

Dramatic groundings, tanker col- lisions and an increasing loss of life at sea during the past year will be the focus of the Sasmex Interna- tional '94 Conference. Keynote speakers will include William

O'Neil, secretary-general of the In- ternational Maritime Organization (IMO), and Lord Donaldson, whose report into safety measures following the Braer disaster is a magnet for discussion.

Papers will be presented Wednes- day, April 13 and Thursday, April 14. Richard Harris, exhibition sales director, said that the event has not changed in terms of focus.

However, he said, "The Conference does change to reflect the current concerns in the safety market. That has fairly dramatically changed."

True to that observation, the open- ing session, "Restoring Confidence in Safe Shipping," will examine some of the underlying causes of recent maritime accidents and attempt to identify solutions. Among the is- sues raised will be Fleet Manage- ment — What Is Its Role In Accident

Claims — The Need for Loss Pre- vention. The session will examine some of the current initiatives to improve safety levels in merchant shipping, including the implemen- tation of the IMO's International

Tests have proven that Jason's Cradle, from Land and Marine Products, is an effective, efficient means to retrieve an unconscious person into an open lifeboat in as few as 10 seconds, and into an enclosed boat in 20 seconds, the manufacturer claims.

Constructed of tough engineering plastics with polypropylene and marine-grade stainless steel, the cradle is a ladder-like construction which is designed to be rolled up easily in one direction, yet locks into a non- collapsible loop which is lowered over the side of the rescue boat. Crew members and conscious rescuees can climb the ladder rungs to board the boat, and unconscious casualties can be guided into the loop and then lifted manually or mechanically. The rigid loop retains its shape and reportedly can not cause further injury.

The cradle is constructed of molded sections, each seven inches (177mm) wide. The rungs are .75- inch (20mm) thick, and are linked at 5.5-inch (137.5mm) intervals hinged around recessed stainless-steel rods. The cradle has been approved for use as a life-saving ap- pliance and boarding lad- der by the British Depart- ment of Transport, and the flHK

U.S. Coast Guard has ac- ^Jm jHHB'. * H cepted it for use as a life- K boat boarding ladder for use on U.S.-registered ships. For more informa- tion on Jason's Cradle from ^^•ffi^uuj^j^

Jason's Cradle has proven its efficiency in lifting unconscious

Circle 4 on Reader Service Card people from the water' 100