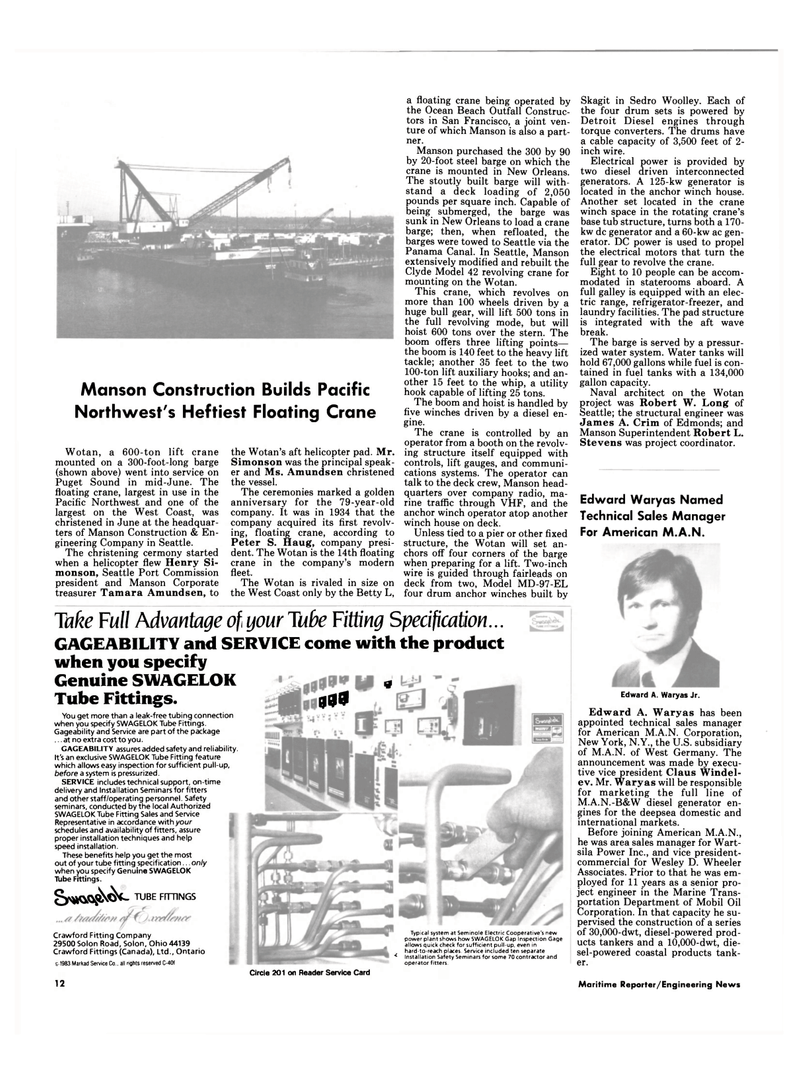 Wotan, a 600-ton lift crane mounted on a 300-foot-long barge (shown above) went into service on

Puget Sound in mid-June. The floating crane, largest in use in the

Pacific Northwest and one of the largest on the West Coast, was christened in June at the headquar- ters of Manson Construction & En- gineering Company in Seattle.

Simonson was the principal speak- er and Ms. Amundsen christened the vessel.

The ceremonies marked a golden anniversary for the 79-year-old company. It was in 1934 that the company acquired its first revolv- ing, floating crane, according to

The Wotan is rivaled in size on the West Coast only by the Betty L, a floating crane being operated by the Ocean Beach Outfall Construc- tors in San Francisco, a joint ven- ture of which Manson is also a part- ner.

Manson purchased the 300 by 90 by 20-foot steel barge on which the crane is mounted in New Orleans.

The stoutly built barge will with- stand a deck loading of 2,050 pounds per square inch. Capable of being submerged, the barge was sunk in New Orleans to load a crane barge; then, when refloated, the barges were towed to Seattle via the

Panama Canal. In Seattle, Manson extensively modified and rebuilt the

Clyde Model 42 revolving crane for mounting on the Wotan.

This crane, which revolves on more than 100 wheels driven by a huge bull gear, will lift 500 tons in the full revolving mode, but will hoist 600 tons over the stern. The boom offers three lifting points— the boom is 140 feet to the heavy lift tackle; another 35 feet to the two 100-ton lift auxiliary hooks; and an- other 15 feet to the whip, a utility hook capable of lifting 25 tons.

The boom and hoist is handled by five winches driven by a diesel en- gine.

The crane is controlled by an operator from a booth on the revolv- ing structure itself equipped with controls, lift gauges, and communi- cations systems. The operator can talk to the deck crew, Manson head- quarters over company radio, ma- rine traffic through VHF, and the anchor winch operator atop another winch house on deck.

Unless tied to a pier or other fixed structure, the Wotan will set an- chors off four corners of the barge when preparing for a lift. Two-inch wire is guided through fairleads on deck from two, Model MD-97-EL four drum anchor winches built by

Skagit in Sedro Woolley. Each of the four drum sets is powered by

Detroit Diesel engines through torque converters. The drums have a cable capacity of 3,500 feet of 2- inch wire.

Electrical power is provided by two diesel driven interconnected generators. A 125-kw generator is located in the anchor winch house.

Another set located in the crane winch space in the rotating crane's base tub structure, turns both a 170- kw dc generator and a 60-kw ac gen- erator. DC power is used to propel the electrical motors that turn the full gear to revolve the crane.

Eight to 10 people can be accom- modated in staterooms aboard. A full galley is equipped with an elec- tric range, refrigerator-freezer, and laundry facilities. The pad structure is integrated with the aft wave break.

The barge is served by a pressur- ized water system. Water tanks will hold 67,000 gallons while fuel is con- tained in fuel tanks with a 134,000 gallon capacity.

Naval architect on the Wotan project was Robert W. Long of

Seattle; the structural engineer was

James A. Crim of Edmonds; and

Edward A. Waryas has been appointed technical sales manager for American M.A.N. Corporation,

New York, N.Y., the U.S. subsidiary of M.A.N, of West Germany. The announcement was made by execu- tive vice president Claus Windel- ev. Mr. Waryas will be responsible for marketing the full line of

Associates. Prior to that he was em- ployed for 11 years as a senior pro- ject engineer in the Marine Trans- portation Department of Mobil Oil

Corporation. In that capacity he su- pervised the construction of a series of 30,000-dwt, diesel-powered prod- ucts tankers and a 10,000-dwt, die- sel-powered coastal products tank- er. * 009

GAGEABILITY and SERVICE come with the product when you specify

You get more than a leak-free tubing connection when you specify SWAGELOK Tube Fittings.

Gageability and Service are part of the package . . . at no extra cost to you.

It's an exclusive SWAGELOK Tube Fitting feature which allows easy inspection for sufficient pull-up, before a system is pressurized.

Representative in accordance with your schedules and availability of fitters, assure proper installation techniques and help speed installation.

These benefits help you get the most out of your tube fitting specification... only when you specify Genuine SWAGELOK