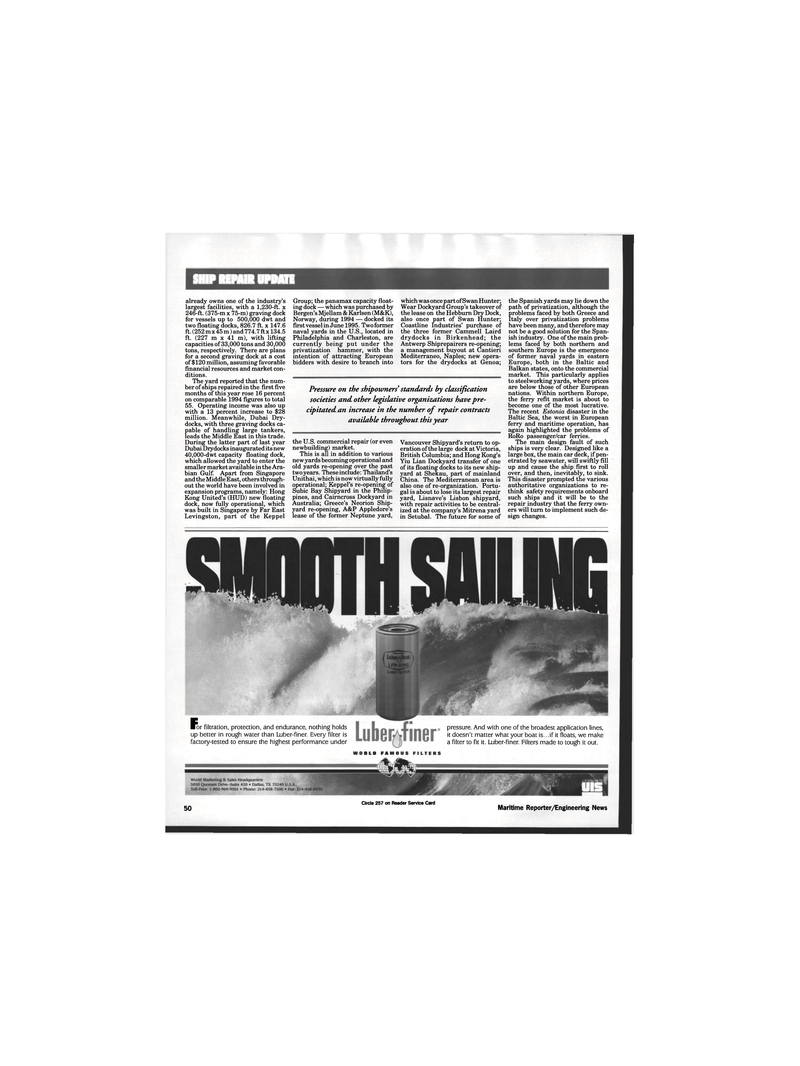 The yard reported that the num- ber of ships repaired in the first five months of this year rose 16 percent on comparable 1994 figures to total 55. Operating income was also up with a 13 percent increase to $28 million. Meanwhile, Dubai Dry- docks, with three graving docks ca- pable of handling large tankers, leads the Middle East in this trade.

During the latter part of last year

Dubai Drydocks inaugurated its new 40,000-dwt capacity floating dock, which allowed the yard to enter the smaller market available in the Ara- bian Gulf. Apart from Singapore and the Middle East, others through- out the world have been involved in expansion programs, namely: Hong

Levingston, part of the Keppel

Group; the panamax capacity float- ing dock — which was purchased by

Norway, during 1994 — docked its firstvesselin June 1995. Two former naval yards in the U.S., located in

Philadelphia and Charleston, are currently being put under the privatization hammer, with the intention of attracting European bidders with desire to branch into the U.S. commercial repair (or even newbuilding) market.

This is all in addition to various new yards becoming operational and old yards re-opening over the past two years. These include: Thailand's

Unithai, which is now virtually fully operational; Keppel's re-opening of

Subic Bay Shipyard in the Philip- pines, and Cairncross Dockyard in

Wear Dockyard Group's takeover of the lease on the Hebburn Dry Dock, also once part of Swan Hunter;

Coastline Industries' purchase of the three former Cammell Laird drydocks in Birkenhead; the

Mediterraneo, Naples; new opera- tors for the drydocks at Genoa;

Vancouver Shipyard's return to op- eration of the large dock at Victoria,

Yiu Lian Dockyard transfer of one of its floating docks to its new ship- yard at Shekau, part of mainland

China. The Mediterranean area is also one of re-organization. Portu- gal is about to lose its largest repair yard, Lisnave's Lisbon shipyard, with repair activities to be central- ized at the company's Mitrena yard in Setubal. The future for some of the Spanish yards may lie down the path of privatization, although the problems faced by both Greece and

Italy over privatization problems have been many, and therefore may not be a good solution for the Span- ish industry. One of the main prob- lems faced by both northern and southern Europe is the emergence of former naval yards in eastern

Europe, both in the Baltic and

Balkan states, onto the commercial market. This particularly applies to steelworking yards, where prices are below those of other European nations. Within northern Europe, the ferry refit market is about to become one of the most lucrative.

The recent Estonia disaster in the

Baltic Sea, the worst in European ferry and maritime operation, has again highlighted the problems of

The main design fault of such ships is very clear. Designed like a large box, the main car deck, if pen- etrated by seawater, will swiftly fill up and cause the ship first to roll over, and then, inevitably, to sink.

This disaster prompted the various authoritative organizations to re- think safety requirements onboard such ships and it will be to the repair industry that the ferry own- ers will turn to implement such de- sign changes.

Rr filtration, protection, and endurance, nothing holds up better in rough water than Luber-finer. Every filter is factory-tested to ensure the highest performance under pressure. And with one of the broadest application lines, it doesn't matter what your boat is.. .if it floats, we make a filter to fit it. Luber-finer. Filters made to tough it out. 50