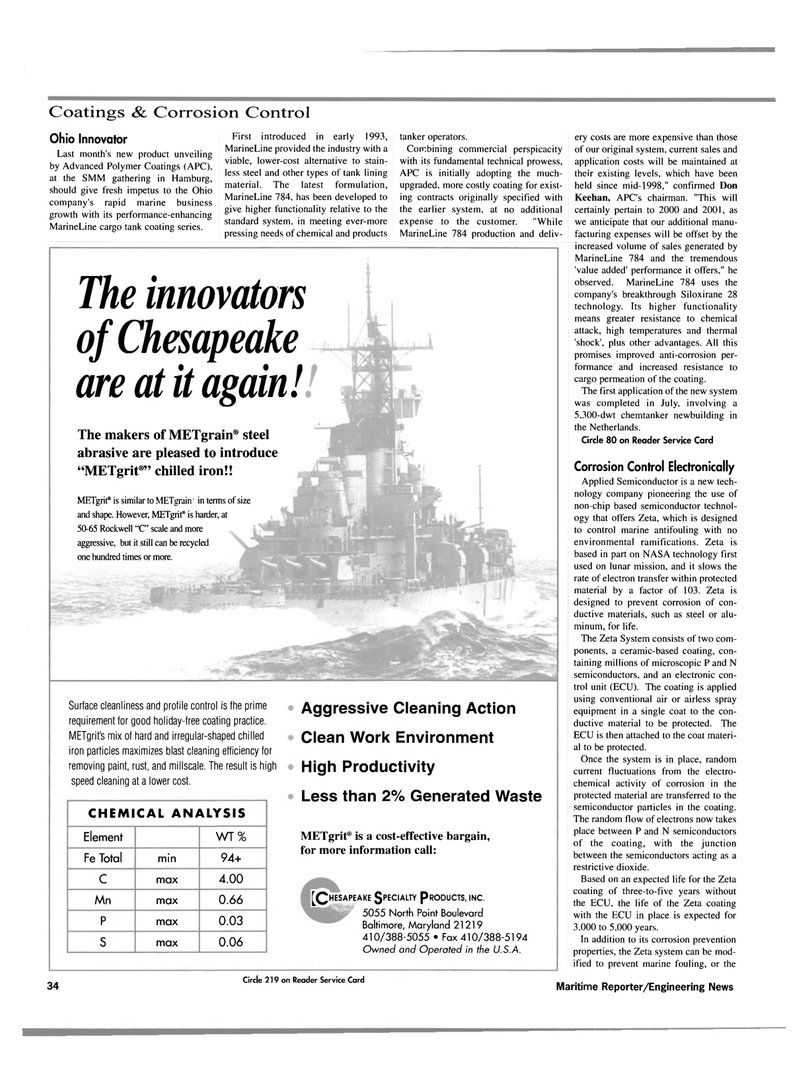 Last month's new product unveiling by Advanced Polymer Coatings (APC), at the SMM gathering in Hamburg, should give fresh impetus to the Ohio company's rapid marine business growth with its performance-enhancing

MarineLine provided the industry with a viable, lower-cost alternative to stain- less steel and other types of tank lining material. The latest formulation,

MarineLine 784, has been developed to give higher functionality relative to the standard system, in meeting ever-more pressing needs of chemical and products tanker operators.

APC is initially adopting the much- upgraded. more costly coating for exist- ing contracts originally specified with the earlier system, at no additional expense to the customer. "While

MarineLine 784 production and deliv- ery costs are more expensive than those of our original system, current sales and application costs will be maintained at their existing levels, which have been held since mid-1998," confirmed Don

Keehan, APC's chairman. "This will certainly pertain to 2000 and 2001, as we anticipate that our additional manu- facturing expenses will be offset by the increased volume of sales generated by

MarineLine 784 and the tremendous 'value added' performance it offers," he observed. MarineLine 784 uses the company's breakthrough Siloxirane 28 technology. Its higher functionality means greater resistance to chemical attack, high temperatures and thermal 'shock', plus other advantages. All this promises improved anti-corrosion per- formance and increased resistance to cargo permeation of the coating.

The first application of the new system was completed in July, involving a 5,300-dwt chemtanker newbuilding in the Netherlands.

Applied Semiconductor is a new tech- nology company pioneering the use of non-chip based semiconductor technol- ogy that offers Zeta, which is designed to control marine antifouling with no environmental ramifications. Zeta is based in part on NASA technology first used on lunar mission, and it slows the rate of electron transfer within protected material by a factor of 103. Zeta is designed to prevent corrosion of con- ductive materials, such as steel or alu- minum, for life.

The Zeta System consists of two com- ponents, a ceramic-based coating, con- taining millions of microscopic P and N semiconductors, and an electronic con- trol unit (ECU). The coating is applied using conventional air or airless spray equipment in a single coat to the con- ductive material to be protected. The

ECU is then attached to the coat materi- al to be protected.

Once the system is in place, random current fluctuations from the electro- chemical activity of corrosion in the protected material are transferred to the semiconductor particles in the coating.

The random flow of electrons now takes place between P and N semiconductors of the coating, with the junction between the semiconductors acting as a restrictive dioxide.

In addition to its corrosion prevention properties, the Zeta system can be mod- ified to prevent marine fouling, or the

Owned and Operated in the U.S.A.

The innovators of Chesapeake are at it again!

The makers of METgrain® steel abrasive are pleased to introduce "METgrit®" chilled iron!!

METgrit® is similar to METgrain in terms of size and shape. However, METgrit* is harder, at 50-65 Rockwell "C" scale and more aggressive, but it still can be recycled one hundred times or more. 34 Circle 219 on Reader Service Card Maritime Reporter/Engineering News