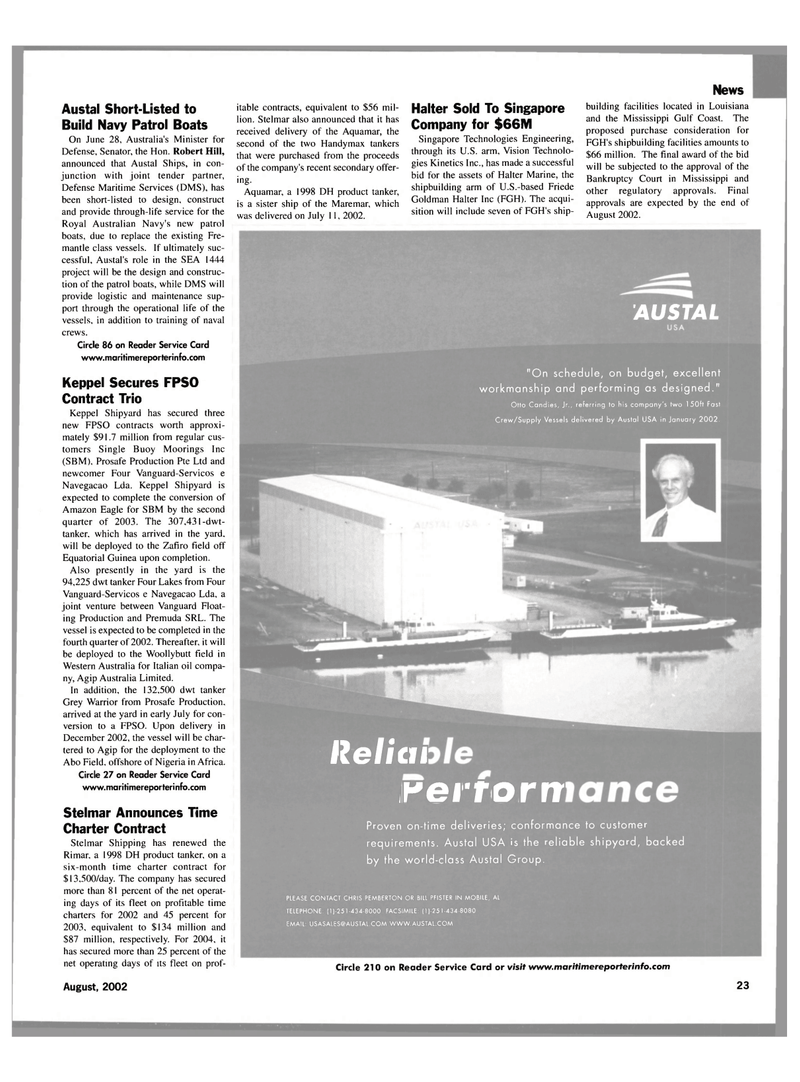 On June 28, Australia's Minister for

Defense Maritime Services (DMS), has been short-listed to design, construct and provide through-life service for the

Royal Australian Navy's new patrol boats, due to replace the existing Fre- mantle class vessels. If ultimately suc- cessful, Austal's role in the SEA 1444 project will be the design and construc- tion of the patrol boats, while DMS will provide logistic and maintenance sup- port through the operational life of the vessels, in addition to training of naval crews.

Circle 86 on Reader Service Card www.maritimereporterinfo.com itable contracts, equivalent to $56 mil- lion. Stelmar also announced that it has received delivery of the Aquamar, the second of the two Handymax tankers that were purchased from the proceeds of the company's recent secondary offer- ing.

Singapore Technologies Engineering, through its U.S. arm. Vision Technolo- gies Kinetics Inc., has made a successful bid for the assets of Halter Marine, the shipbuilding arm of U.S.-based Friede

Goldman Halter Inc (FGH). The acqui- sition will include seven of FGH's ship- building facilities located in Louisiana and the Mississippi Gulf Coast. The proposed purchase consideration for

FGH's shipbuilding facilities amounts to $66 million. The final award of the bid will be subjected to the approval of the

Bankruptcy Court in Mississippi and other regulatory approvals. Final approvals are expected by the end of

Navegacao Lda. Keppel Shipyard is expected to complete the conversion of

Amazon Eagle for SBM by the second quarter of 2003. The 307,431-dwt- tanker, which has arrived in the yard, will be deployed to the Zafiro field off

Also presently in the yard is the 94,225 dwt tanker Four Lakes from Four

Vanguard-Servicos e Navegacao Lda, a joint venture between Vanguard Float- ing Production and Premuda SRL. The vessel is expected to be completed in the fourth quarter of 2002. Thereafter, it will be deployed to the Woollybutt field in

Grey Warrior from Prosafe Production, arrived at the yard in early July for con- version to a FPSO. Upon delivery in

December 2002, the vessel will be char- tered to Agip for the deployment to the

Stelmar Shipping has renewed the

AUSTAL "On schedule, on budget, excellent workmanship and performing as designed."