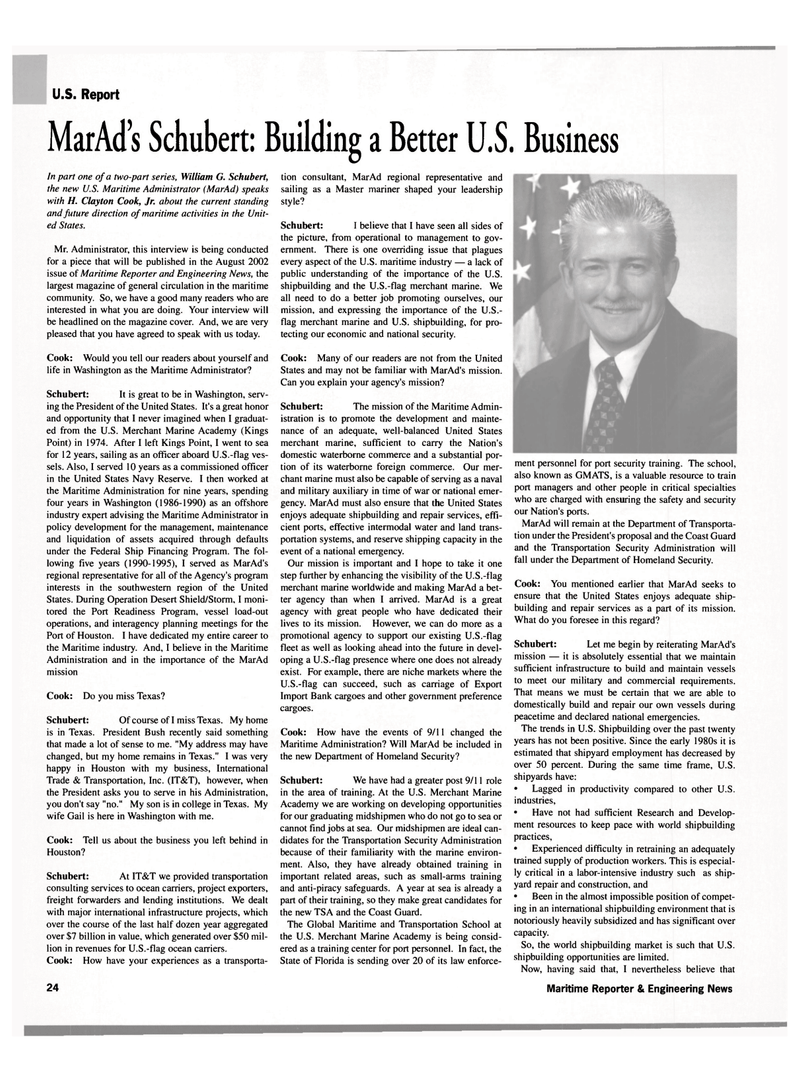 In part one of a two-part series, William G. Schubert, the new U.S. Maritime Administrator (MarAd) speaks with H. Clayton Cook, Jr. about the current standing and future direction of maritime activities in the Unit- ed States.

Mr. Administrator, this interview is being conducted for a piece that will be published in the August 2002 issue of Maritime Reporter and Engineering News, the largest magazine of general circulation in the maritime community. So, we have a good many readers who are interested in what you are doing. Your interview will be headlined on the magazine cover. And, we are very pleased that you have agreed to speak with us today.

Cook: Would you tell our readers about yourself and life in Washington as the Maritime Administrator?

Schubert: It is great to be in Washington, serv- ing the President of the United States. It's a great honor and opportunity that I never imagined when I graduat- ed from the U.S. Merchant Marine Academy (Kings

Point) in 1974. After I left Kings Point, I went to sea for 12 years, sailing as an officer aboard U.S.-flag ves- sels. Also, I served 10 years as a commissioned officer in the United States Navy Reserve. I then worked at the Maritime Administration for nine years, spending four years in Washington (1986-1990) as an offshore industry expert advising the Maritime Administrator in policy development for the management, maintenance and liquidation of assets acquired through defaults under the Federal Ship Financing Program. The fol- lowing five years (1990-1995), I served as MarAd's regional representative for all of the Agency's program interests in the southwestern region of the United

Port of Houston. I have dedicated my entire career to the Maritime industry. And, I believe in the Maritime

Administration and in the importance of the MarAd mission

Cook: Do you miss Texas?

Schubert: Of course of I miss Texas. My home is in Texas. President Bush recently said something that made a lot of sense to me. "My address may have changed, but my home remains in Texas." I was very happy in Houston with my business, International

Trade & Transportation, Inc. (IT&T), however, when the President asks you to serve in his Administration, you don't say "no." My son is in college in Texas. My wife Gail is here in Washington with me.

Cook: Tell us about the business you left behind in

Schubert: At IT&T we provided transportation consulting services to ocean carriers, project exporters, freight forwarders and lending institutions. We dealt with major international infrastructure projects, which over the course of the last half dozen year aggregated over $7 billion in value, which generated over $50 mil- lion in revenues for U.S.-flag ocean carriers.

Cook: How have your experiences as a transporta- tion consultant, MarAd regional representative and sailing as a Master mariner shaped your leadership style?

Schubert: I believe that I have seen all sides of the picture, from operational to management to gov- ernment. There is one overriding issue that plagues every aspect of the U.S. maritime industry — a lack of public understanding of the importance of the U.S. shipbuilding and the U.S.-flag merchant marine. We all need to do a better job promoting ourselves, our mission, and expressing the importance of the U.S.- flag merchant marine and U.S. shipbuilding, for pro- tecting our economic and national security.

Cook: Many of our readers are not from the United

States and may not be familiar with MarAd's mission.

Can you explain your agency's mission?

Schubert: The mission of the Maritime Admin- istration is to promote the development and mainte- nance of an adequate, well-balanced United States merchant marine, sufficient to carry the Nation's domestic waterborne commerce and a substantial por- tion of its waterborne foreign commerce. Our mer- chant marine must also be capable of serving as a naval and military auxiliary in time of war or national emer- gency. MarAd must also ensure that the United States enjoys adequate shipbuilding and repair services, effi- cient ports, effective intermodal water and land trans- portation systems, and reserve shipping capacity in the event of a national emergency.

Our mission is important and I hope to take it one step further by enhancing the visibility of the U.S.-flag merchant marine worldwide and making MarAd a bet- ter agency than when I arrived. MarAd is a great agency with great people who have dedicated their lives to its mission. However, we can do more as a promotional agency to support our existing U.S.-flag fleet as well as looking ahead into the future in devel- oping a U.S.-flag presence where one does not already exist. For example, there are niche markets where the

U.S.-flag can succeed, such as carriage of Export

Cook: How have the events of 9/11 changed the

Maritime Administration? Will MarAd be included in the new Department of Homeland Security?

Schubert: We have had a greater post 9/11 role in the area of training. At the U.S. Merchant Marine

Academy we are working on developing opportunities for our graduating midshipmen who do not go to sea or cannot find jobs at sea. Our midshipmen are ideal can- didates for the Transportation Security Administration because of their familiarity with the marine environ- ment. Also, they have already obtained training in important related areas, such as small-arms training and anti-piracy safeguards. A year at sea is already a part of their training, so they make great candidates for the new TSA and the Coast Guard.

The Global Maritime and Transportation School at the U.S. Merchant Marine Academy is being consid- ered as a training center for port personnel. In fact, the

State of Florida is sending over 20 of its law enforce- ment personnel for port security training. The school, also known as GMATS, is a valuable resource to train port managers and other people in critical specialties who are charged with ensuring the safety and security our Nation's ports.

Cook: You mentioned earlier that MarAd seeks to ensure that the United States enjoys adequate ship- building and repair services as a part of its mission.

What do you foresee in this regard?

Schubert: Let me begin by reiterating MarAd's mission — it is absolutely essential that we maintain sufficient infrastructure to build and maintain vessels to meet our military and commercial requirements.

That means we must be certain that we are able to domestically build and repair our own vessels during peacetime and declared national emergencies.

The trends in U.S. Shipbuilding over the past twenty years has not been positive. Since the early 1980s it is estimated that shipyard employment has decreased by over 50 percent. During the same time frame, U.S. shipyards have: • Lagged in productivity compared to other U.S. industries, • Have not had sufficient Research and Develop- ment resources to keep pace with world shipbuilding practices, • Experienced difficulty in retraining an adequately trained supply of production workers. This is especial- ly critical in a labor-intensive industry such as ship- yard repair and construction, and • Been in the almost impossible position of compet- ing in an international shipbuilding environment that is notoriously heavily subsidized and has significant over capacity.

Now, having said that, I nevertheless believe that 24 Maritime Reporter & Engineering News