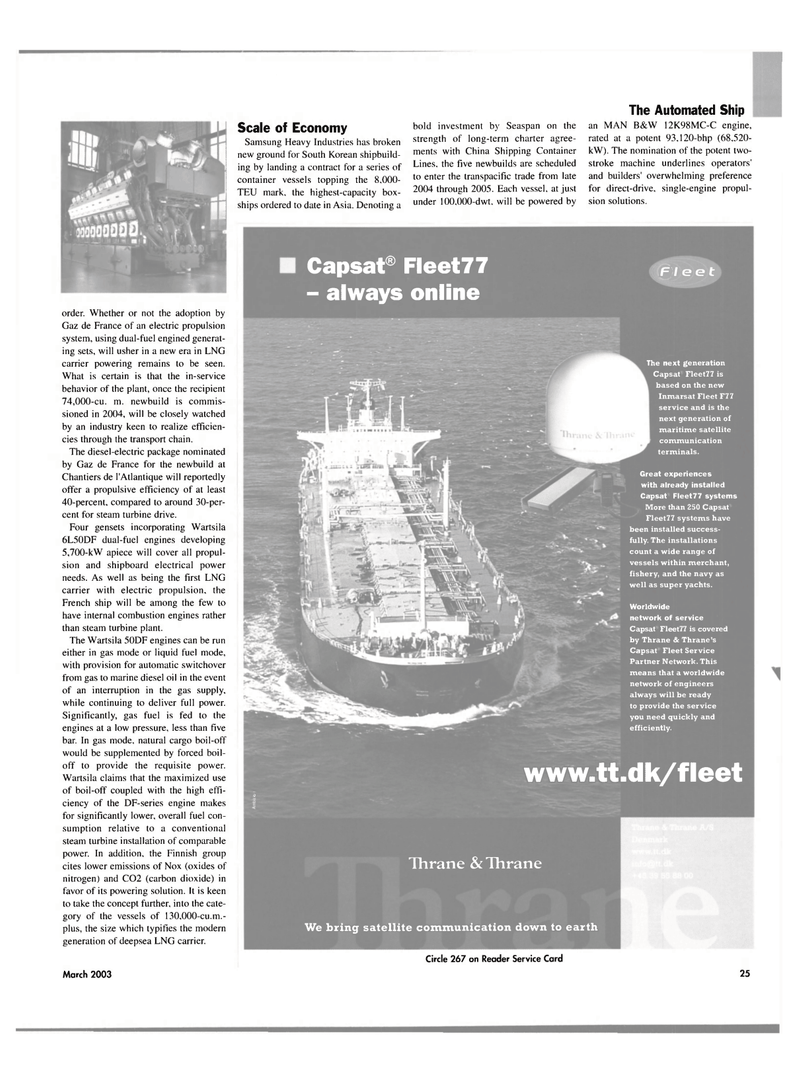 order. Whether or not the adoption by

What is certain is that the in-service behavior of the plant, once the recipient 74,000-cu. m. newbuild is commis- sioned in 2004, will be closely watched by an industry keen to realize efficien- cies through the transport chain.

Chantiers de l'Atlantique will reportedly offer a propulsive efficiency of at least 40-percent, compared to around 30-per- cent for steam turbine drive.

French ship will be among the few to have internal combustion engines rather than steam turbine plant.

The Wartsila 50DF engines can be run either in gas mode or liquid fuel mode, with provision for automatic switchover from gas to marine diesel oil in the event of an interruption in the gas supply, while continuing to deliver full power.

Significantly, gas fuel is fed to the engines at a low pressure, less than five bar. In gas mode, natural cargo boil-off would be supplemented by forced boil- off to provide the requisite power.

Wartsila claims that the maximized use of boil-off coupled with the high effi- ciency of the DF-series engine makes for significantly lower, overall fuel con- sumption relative to a conventional steam turbine installation of comparable power. In addition, the Finnish group cites lower emissions of Nox (oxides of nitrogen) and C02 (carbon dioxide) in favor of its powering solution. It is keen to take the concept further, into the cate- gory of the vessels of 130,000-cu.m.- plus, the size which typifies the modern generation of deepsea LNG carrier.

Samsung Heavy Industries has broken new ground for South Korean shipbuild- ing by landing a contract for a series of container vessels topping the 8.000-

TEU mark, the highest-capacity box- ships ordered to date in Asia. Denoting a .9 bold investment by Seaspan on the strength of long-term charter agree- ments with China Shipping Container

Lines, the five newbuilds are scheduled to enter the transpacific trade from late 2004 through 2005. Each vessel, at just under 100,000-dwt, will be powered by

We bring satellite communication down to earth

Capsat Fleet77 is based on the new

Inmarsat Fleet F77 service and is the next generation of maritime satellite communication terminals.

Fleet77 systems have been installed success- fully. The installations count a wide range of vessels within merchant, fishery, and the navy as well as super yachts.

Partner Network. This means that a worldwide network of engineers always will be ready to provide the service you need quickly and efficiently.