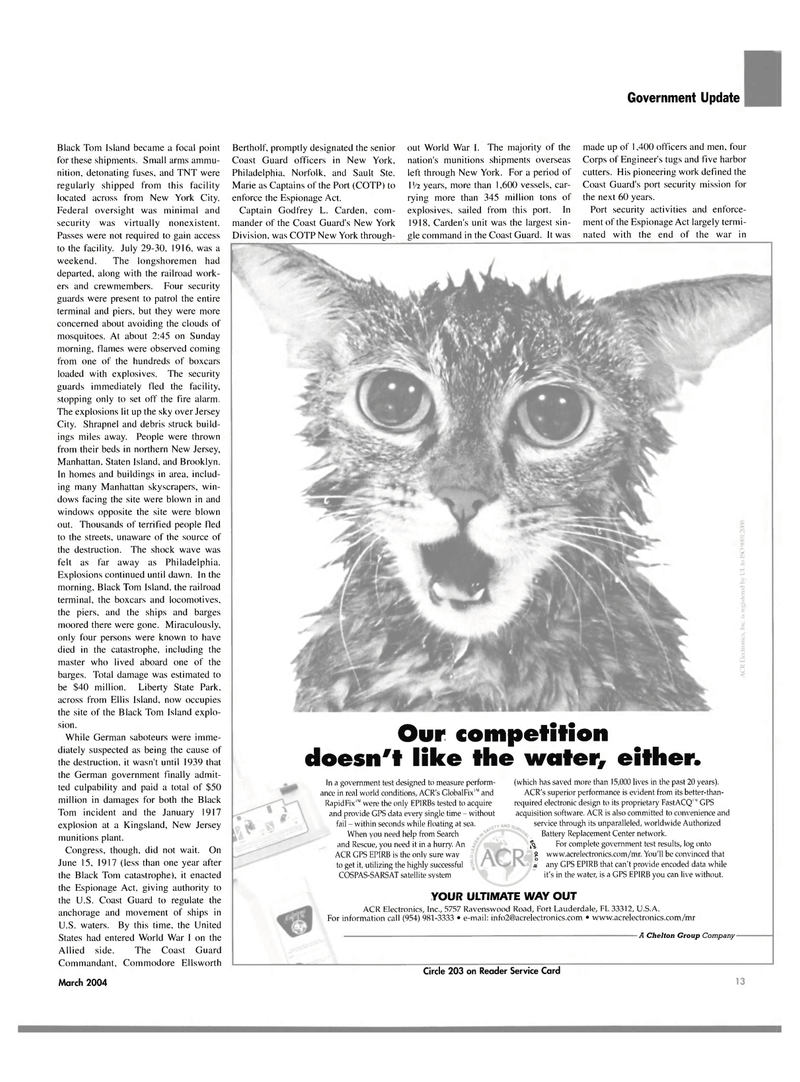 Black Tom Island became a focal point for these shipments. Small arms ammu- nition, detonating fuses, and TNT were regularly shipped from this facility located across from New York City.

Federal oversight was minimal and security was virtually nonexistent.

Passes were not required to gain access to the facility. July 29-30. 1916, was a weekend. The longshoremen had departed, along with the railroad work- ers and crewmembers. Four security guards were present to patrol the entire terminal and piers, but they were more concerned about avoiding the clouds of mosquitoes. At about 2:45 on Sunday morning, flames were observed coming from one of the hundreds of boxcars loaded with explosives. The security guards immediately fled the facility, stopping only to set off the fire alarm.

The explosions lit up the sky over Jersey

City. Shrapnel and debris struck build- ings miles away. People were thrown from their beds in northern New Jersey,

In homes and buildings in area, includ- ing many Manhattan skyscrapers, win- dows facing the site were blown in and windows opposite the site were blown out. Thousands of terrified people lied to the streets, unaware of the source of the destruction. The shock wave was felt as far away as Philadelphia.

Explosions continued until dawn. In the morning. Black Tom Island, the railroad terminal, the boxcars and locomotives, the piers, and the ships and barges moored there were gone. Miraculously, only four persons were known to have died in the catastrophe, including the master who lived aboard one of the barges. Total damage was estimated to be $40 million. Liberty State Park, across from Ellis Island, now occupies the site of the Black Tom Island explo- sion.

While German saboteurs were imme- diately suspected as being the cause of the destruction, it wasn't until 1939 that the German government finally admit- ted culpability and paid a total of $50 million in damages for both the Black

Tom incident and the January 1917 explosion at a Kingsland, New Jersey munitions plant.

Congress, though, did not wait. On

June 15, 1917 (less than one year after the Black Tom catastrophe), it enacted the Espionage Act, giving authority to the U.S. Coast Guard to regulate the anchorage and movement of ships in

U.S. waters. By this time, the United

States had entered World War I on the

Allied side. The Coast Guard

Marie as Captains of the Port (COTP) to enforce the Espionage Act.

Division, was COTP New York through- out World War I. The majority of the nation's munitions shipments overseas left through New York. For a period of 11/2 years, more than 1,600 vessels, car- rying more than 345 million tons of explosives, sailed from this port. In 1918, Carden's unit was the largest sin- gle command in the Coast Guard. It was made up of 1,400 officers and men, four

Corps of Engineer's tugs and five harbor cutters. His pioneering work defined the

Coast Guard's port security mission for the next 60 years.

YOUR ULTIMATE WAY OUT

In a government test designed to measure perform- ance in real world conditions, ACR's ClobalFix1" and

RapidFix1" were the only EPIRBs tested to acquire and provide GPS data every single time - without fail - within seconds while floating at sea.

When you need help from Search and Rescue, you need it in a hurry. An

ACR GPS EPIRB is the only sure way to get it, utilizing the highly successful

COSPAS-SARSAT satellite system (which has saved more than 15,000 lives in the past 20 years).

ACR's superior performance is evident from its better-than- required electronic design to its proprietary FastACQ1" CPS acquisition software. ACR is also committed to convenience and service through its unparalleled, worldwide Authorized

Battery Replacement Center network. \ For complete government test results, log onto ? www.acrelectronics.com/mr. You'll be convinced that o s any GPS EPIRB that can't provide encoded data while it's in the water, is a GPS EPIRB you can live without.