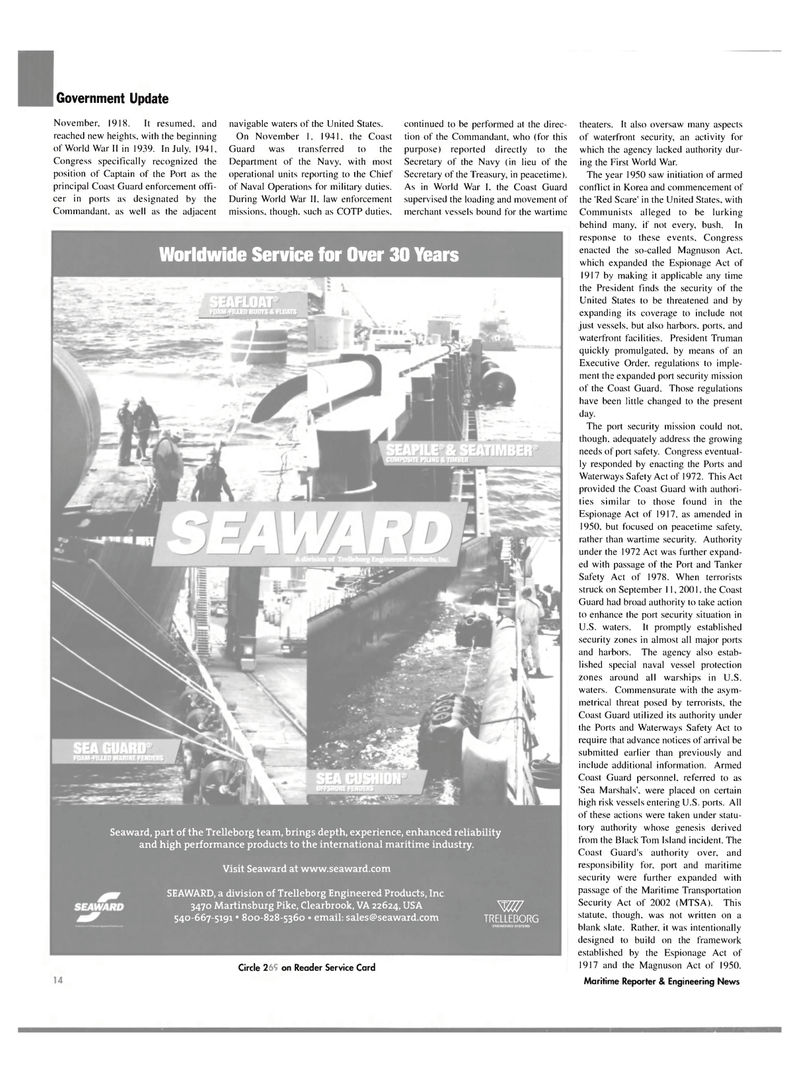 Commandant, as well as the adjacent navigable waters of the United States.

Guard was transferred to the

Department of the Navy, with most operational units reporting to the Chief of Naval Operations for military duties.

During World War II. law enforcement missions, though, such as COTP duties. continued to be performed at the direc- tion of the Commandant, who (for this purpose) reported directly to the

Secretary of the Navy (in lieu of the

Secretary of the Treasury, in peacetime).

As in World War I. the Coast Guard supervised the loading and movement of merchant vessels bound for the wartime

Circle 237 on Reader Service Card theaters. It also oversaw many aspects of waterfront security, an activity for which the agency lacked authority dur- ing the First World War.

The year 1950 saw initiation of armed conflict in Korea and commencement of the 'Red Scare' in the United States, with

Communists alleged to be lurking behind many, if not every, bush. In response to these events. Congress enacted the so-called Magnuson Act, which expanded the Espionage Act of 1917 by making it applicable any time the President finds the security of the

United States to be threatened and by expanding its coverage to include not just vessels, but also harbors, ports, and waterfront facilities. President Truman quickly promulgated, by means of an

Executive Order, regulations to imple- ment the expanded port security mission of the Coast Guard. Those regulations have been little changed to the present day.

The port security mission could not. though, adequately address the growing needs of port safety. Congress eventual- ly responded by enacting the Ports and

Waterways Safety Act of 1972. This Act provided the Coast Guard with authori- ties similar to those found in the

Espionage Act of 1917, as amended in 1950, but focused on peacetime safety, rather than wartime security. Authority under the 1972 Act was further expand- ed with passage of the Port and Tanker

U.S. waters. It promptly established security zones in almost all major ports and harbors. The agency also estab- lished special naval vessel protection zones around all warships in U.S. waters. Commensurate with the asym- metrical threat posed by terrorists, the

Coast Guard utilized its authority under the Ports and Waterways Safety Act to require that advance notices of arrival be submitted earlier than previously and include additional information. Armed

Coast Guard personnel, referred to as 'Sea Marshals', were placed on certain high risk vessels entering U.S. ports. All of these actions were taken under statu- tory authority whose genesis derived from the Black Tom Island incident. The

Coast Guard's authority over, and responsibility for, port and maritime security were further expanded with passage of the Maritime Transportation

Security Act of 2002 (MTSA). This statute, though, was not written on a blank slate. Rather, it was intentionally designed to build on the framework established by the Espionage Act of 1917 and the Magnuson Act of 1950. 16 Maritime Reporter & Engineering News

Worldwide Service for Over 30 Years