Read this page in Pdf, Flash or Html5 edition of May 2004 Maritime Reporter Magazine 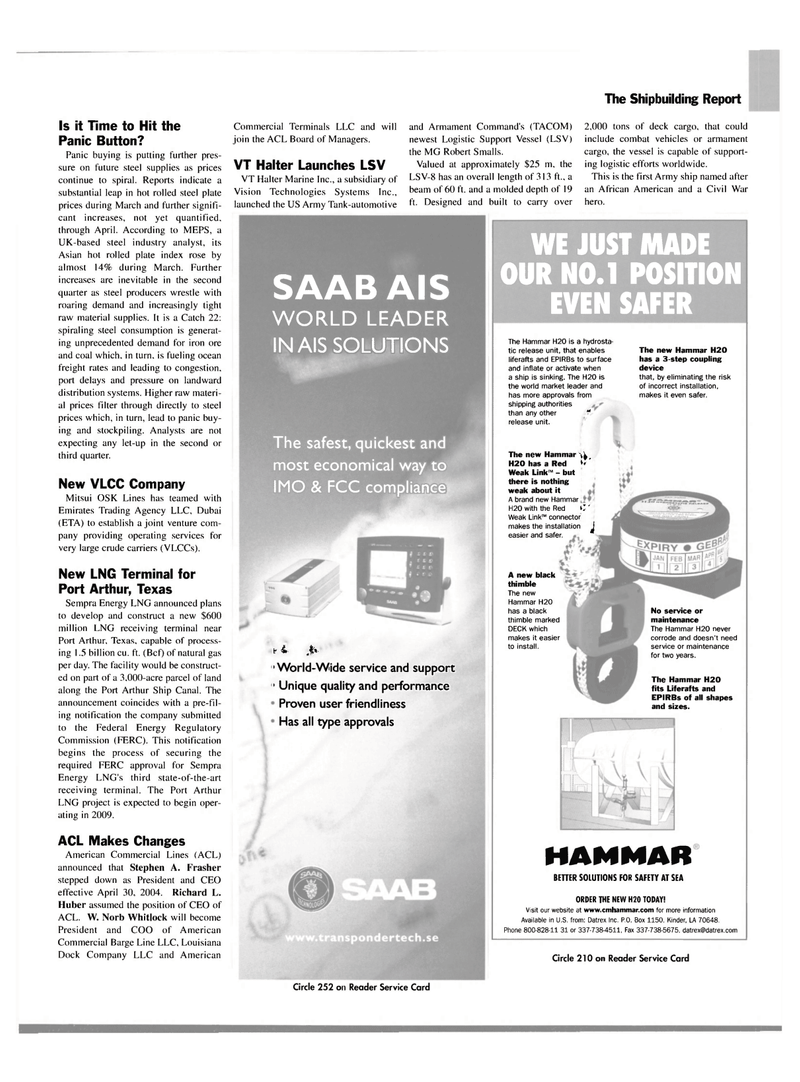 Is it Time to Hit the

Panic buying is putting further pres- sure on future steel supplies as prices continue to spiral. Reports indicate a substantial leap in hot rolled steel plate prices during March and further signifi- cant increases, not yet quantified, through April. According to MEPS, a

Asian hot rolled plate index rose by almost 14% during March. Further increases are inevitable in the second quarter as steel producers wrestle with roaring demand and increasingly tight raw material supplies. It is a Catch 22: spiraling steel consumption is generat- ing unprecedented demand for iron ore and coal which, in turn, is fueling ocean freight rates and leading to congestion, port delays and pressure on landward distribution systems. Higher raw materi- al prices filter through directly to steel prices which, in turn, lead to panic buy- ing and stockpiling. Analysts are not expecting any let-up in the second or third quarter.

Mitsui OSK Lines has teamed with

Port Arthur, Texas, capable of process- ing 1.5 billion cu. ft. (Bcf) of natural gas per day. The facility would be construct- ed on part of a 3,000-acre parcel of land along the Port Arthur Ship Canal. The announcement coincides with a pre-fil- ing notification the company submitted to the Federal Energy Regulatory

Commission (FERC). This notification begins the process of securing the required FERC approval for Sempra

LNG project is expected to begin oper- ating in 2009.

Huber assumed the position of CEO of

President and COO of American

Commercial Terminals LLC and will join the ACL Board of Managers.

Valued at approximately $25 m, the

LSV-8 has an overall length of 313 ft., a beam of 60 ft. and a molded depth of 19 ft. Designed and built to carry over 2,000 tons of deck cargo, that could include combat vehicles or armament cargo, the vessel is capable of support- ing logistic efforts worldwide.

This is the first Army ship named after an African American and a Civil War hero.

The safest, quickest and most economical way to

Has all type approvals

The Hammar H20 is a hydrosta- tic release unit, that enables liferafts and EPIRBs to surface and inflate or activate when a ship is sinking. The H20 is the world market leader and has more approvals from shipping authorities than any other ** release unit.

Weak Link" - but there is nothing weak about it

The new Hammar H20 has a 3-step coupling device that, by eliminating the risk of incorrect installation, makes it even safer. easier and safer.

DECK which makes it easier to install.

No service or maintenance

The Hammar H20 fits Liferafts and

EPIRBs of all shapes and sizes.

BETTER SOLUTIONS FOR SAFETY AT SEA