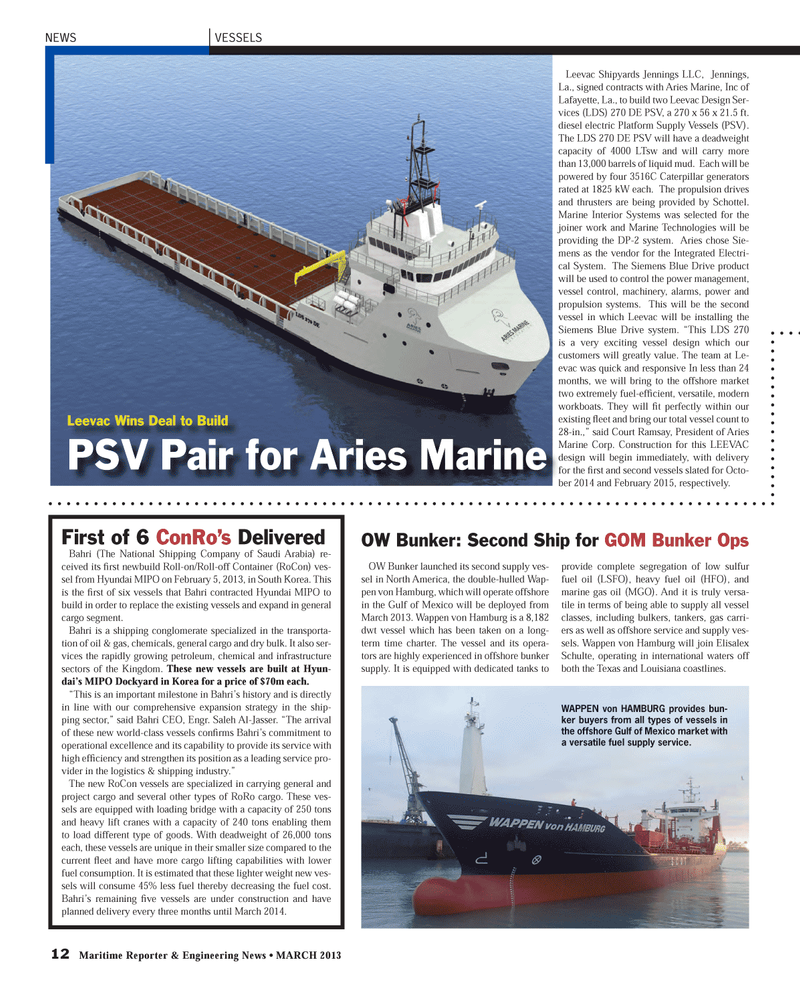 12 Maritime Reporter & Engineering News ? MARCH 2013 NEWSVESSELSLeevac Shipyards Jennings LLC, Jennings, La., signed contracts with Aries Marine, Inc of Lafayette, La., to build two Leevac Design Ser- vices (LDS) 270 DE PSV, a 270 x 56 x 21.5 ft. diesel electric Platform Supply Vessels (PSV). The LDS 270 DE PSV will have a deadweight capacity of 4000 LTsw and will carry more than 13,000 barrels of liquid mud. Each will be powered by four 3516C Caterpillar generators rated at 1825 kW each. The propulsion drives and thrusters are being provided by Schottel. Marine Interior Systems was selected for the joiner work and Marine Technologies will be providing the DP-2 system. Aries chose Sie- mens as the vendor for the Integrated Electri-cal System. The Siemens Blue Drive product will be used to control the power management, vessel control, machinery, alarms, power and propulsion systems. This will be the second vessel in which Leevac will be installing the Siemens Blue Drive system. ?This LDS 270 is a very exciting vessel design which our customers will greatly value. The team at Le- evac was quick and responsive In less than 24 months, we will bring to the offshore market two extremely fuel-efÞ cient, versatile, modern workboats. They will Þ t perfectly within our existing ß eet and bring our total vessel count to 28-in.,? said Court Ramsay, President of Aries Marine Corp. Construction for this LEEVAC design will begin immediately, with delivery for the Þ rst and second vessels slated for Octo- ber 2014 and February 2015, respectively. e2MdfbLeevac Wins Deal to Build PSV Pair for Aries MarineFirst of 6 ConRo?s Delivered Bahri (The National Shipping Company of Saudi Arabia) re- ceived its Þ rst newbuild Roll-on/Roll-off Container (RoCon) ves- sel from Hyundai MIPO on February 5, 2013, in South Korea. This is the Þ rst of six vessels that Bahri contracted Hyundai MIPO to build in order to replace the existing vessels and expand in general cargo segment. Bahri is a shipping conglomerate specialized in the transporta-tion of oil & gas, chemicals, general cargo and dry bulk. It also ser- vices the rapidly growing petroleum, chemical and infrastructure sectors of the Kingdom. These new vessels are built at Hyun- dai?s MIPO Dockyard in Korea for a price of $70m each. ?This is an important milestone in Bahri?s history and is directly in line with our comprehensive expansion strategy in the ship-ping sector,? said Bahri CEO, Engr. Saleh Al-Jasser. ?The arrival of these new world-class vessels conÞ rms Bahri?s commitment to operational excellence and its capability to provide its service with high efÞ ciency and strengthen its position as a leading service pro- vider in the logistics & shipping industry.? The new RoCon vessels are specialized in carrying general and project cargo and several other types of RoRo cargo. These ves- sels are equipped with loading bridge with a capacity of 250 tons and heavy lift cranes with a capacity of 240 tons enabling them to load different type of goods. With deadweight of 26,000 tons each, these vessels are unique in their smaller size compared to the current ß eet and have more cargo lifting capabilities with lower fuel consumption. It is estimated that these lighter weight new ves-sels will consume 45% less fuel thereby decreasing the fuel cost. Bahri?s remaining Þ ve vessels are under construction and have planned delivery every three months until March 2014.OW Bunker: Second Ship for GOM Bunker OpsWAPPEN von HAMBURG provides bun- ker buyers from all types of vessels in the offshore Gulf of Mexico market with a versatile fuel supply service. OW Bunker launched its second supply ves- sel in North America, the double-hulled Wap- pen von Hamburg, which will operate offshore in the Gulf of Mexico will be deployed from March 2013. Wappen von Hamburg is a 8,182 dwt vessel which has been taken on a long-term time charter. The vessel and its opera- tors are highly experienced in offshore bunker supply. It is equipped with dedicated tanks to provide complete segregation of low sulfur fuel oil (LSFO), heavy fuel oil (HFO), and marine gas oil (MGO). And it is truly versa- tile in terms of being able to supply all vessel classes, including bulkers, tankers, gas carri-ers as well as offshore service and supply ves- sels. Wappen von Hamburg will join Elisalex Schulte, operating in international waters off both the Texas and Louisiana coastlines. MR #3 (10-17).indd 12MR #3 (10-17).indd 123/1/2013 9:25:00 AM3/1/2013 9:25:00 AM