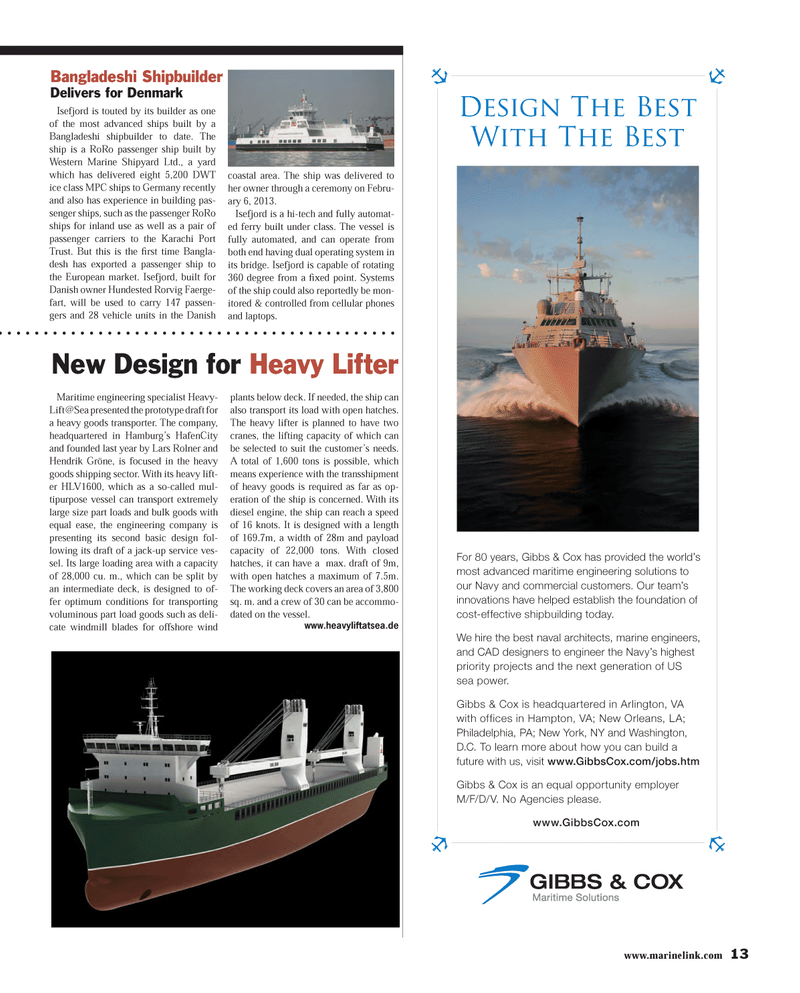 www.marinelink.com 13For 80 years, Gibbs & Cox has provided the worlds most advanced maritime engineering solutions to our Navy and commercial customers. Our teams innovations have helped establish the foundation of cost-effective shipbuilding today. We hire the best naval architects, marine engineers, and CAD designers to engineer the Navys highest priority projects and the next generation of US sea power. Gibbs & Cox is headquartered in Arlington, VA with offices in Hampton, VA; New Orleans, LA; Philadelphia, PA; New York, NY and Washington, D.C. To learn more about how you can build a future with us, visit www.GibbsCox.com/jobs.htm Gibbs & Cox is an equal opportunity employer M/F/D/V. No Agencies please. www.GibbsCox.com Design The Best With The Best Maritime engineering specialist [email protected] presented the prototype draft for a heavy goods transporter. The company, headquartered in Hamburg?s HafenCity and founded last year by Lars Rolner and Hendrik Gröne, is focused in the heavy goods shipping sector. With its heavy lift- er HLV1600, which as a so-called mul- tipurpose vessel can transport extremely large size part loads and bulk goods with equal ease, the engineering company is presenting its second basic design fol-lowing its draft of a jack-up service ves-sel. Its large loading area with a capacity of 28,000 cu. m., which can be split by an intermediate deck, is designed to of-fer optimum conditions for transporting voluminous part load goods such as deli-cate windmill blades for offshore wind plants below deck. If needed, the ship can also transport its load with open hatches. The heavy lifter is planned to have two cranes, the lifting capacity of which can be selected to suit the customer?s needs. A total of 1,600 tons is possible, which means experience with the transshipment of heavy goods is required as far as op-eration of the ship is concerned. With its diesel engine, the ship can reach a speed of 16 knots. It is designed with a length of 169.7m, a width of 28m and payload capacity of 22,000 tons. With closed hatches, it can have a max. draft of 9m, with open hatches a maximum of 7.5m. The working deck covers an area of 3,800 sq. m. and a crew of 30 can be accommo-dated on the vessel. www.heavyliftatsea.de New Design for Heavy Lifter Isefjord is touted by its builder as one of the most advanced ships built by a Bangladeshi shipbuilder to date. The ship is a RoRo passenger ship built by Western Marine Shipyard Ltd., a yard which has delivered eight 5,200 DWT ice class MPC ships to Germany recently and also has experience in building pas-senger ships, such as the passenger RoRo ships for inland use as well as a pair of passenger carriers to the Karachi Port Trust. But this is the Þ rst time Bangla- desh has exported a passenger ship to the European market. Isefjord, built for Danish owner Hundested Rorvig Faerge- fart, will be used to carry 147 passen-gers and 28 vehicle units in the Danish coastal area. The ship was delivered to her owner through a ceremony on Febru-ary 6, 2013. Isefjord is a hi-tech and fully automat-ed ferry built under class. The vessel is fully automated, and can operate from both end having dual operating system in its bridge. Isefjord is capable of rotating 360 degree from a Þ xed point. Systems of the ship could also reportedly be mon-itored & controlled from cellular phones and laptops.Bangladeshi Shipbuilder Delivers for DenmarkMR #3 (10-17).indd 13MR #3 (10-17).indd 133/1/2013 9:25:19 AM3/1/2013 9:25:19 AM