Capacity management is firmly on the minds of Maersk executives as the largest container ships in the world steam into service.

Maersk Line’s first 18,000 teu vessel has prompted much speculation on her economies of scale, particularly as HHI has just confirmed that it is negotiating an order for five slightly larger ships with UASC, said Drewry Maritime Research in a recent paper. The economies of scale offered by Maersk Line’s 18,000 teu vessels are so great that few can ignore them. Assuming the Triple E’s consume 164 tons of fuel a day (excluding diesel), the estimated IFO bunker cost of the Maersk Mc-Kinney Moller (18,270 teu) would already be 35% lower than a  typical 13,100 teu vessel on a per teu carried basis – $218/teu versus $333/teu. Apart from the fact that the ships are bigger, their hulls are reported to be designed around an average ship speed of only 23 knots, compared to over 24 knots for the first 13,000 teu vessels, enabling them to glide through the water more efficiently.
The unit cost comparison is based on an average westbound ship speed of 20 knots for both sizes of vessel, and an eastbound ship speed of 14.6 knots which is the average of Maersk’s services between Asia and Europe according to Drewry’s Carrier Performance Insight. The ships are also assumed to be 85% full westbound, and 55% full eastbound, which may only be achieved in steady state conditions, when all of the vessels deployed in the AE10 service are Triple Es.
As bunker consumption tables for 18,000 teu vessels are not readily available, and Maersk does not disclose such information, the daily consumption has had to be extrapolated from those of vessels ranging between 10,000 teu and 16,000 teu, but they do more-or-less tie in with public announcements from Maersk and national press reports. Maersk claims the vessels to be 35% more fuel efficient per container carried than the first 13,100 teu ships, and the Daily Telegraph has reported that their westbound fuel consumption is approximately 150 tons/day, compared to normal consumption of over 214 tons/day.
Ship operating costs, including manning, insurance, stores/lubes, R&M and
Admin, are also an impressive 11% cheaper – $76/teu carried versus $85/teu carried, although here again, the result has had to be extrapolated from Drewry’s analysis of vessel sizes ranging between 3,000 teu and 12,000 teu in its report entitled ‘Ship Operating Costs 2012-2013 ’. It is based on 2011 costs, which are currently being updated.
The Maersk McKinney Moller is manned with a crew of just 21, which is not unusual these days, but it is possible to run her with just 13.
Putting both IFO bunker and ship operating cost savings together reveals that Maerk’s 18,000 teu ships are a massive 30% cheaper than 13,100 teu ships on a round voyage basis – $294/teu carried versus $418/teu carried. This does not include Suez Canal and port costs, however, so is not a total slot cost, but the differential in ship operating cost is clear.
Other savings include faster cargo handling. According to APM Terminals, berth and crane productivity of the Maersk Mc-Kinney Moller (18,270 teu) last week already reached a record 215  and 37.1 gross moves per hour respectively in Rotterdam. This compares with a ‘normal’ berth productivity average of between 140 and 150 moves per hour and a crane productivity average of between 32 and 33 moves per hour for a well stowed 14,000 teu vessel. Because of its greater size, an average of seven cranes could be worked on the Maersk Mc-Kinney Moller, with the maximum going up to eight, whereas only six can usually be worked on a 14,000 teu size vessel. 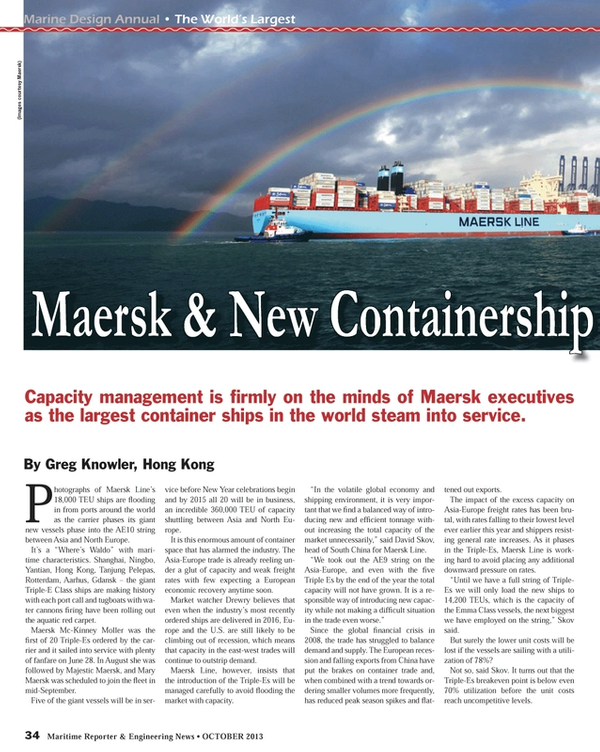