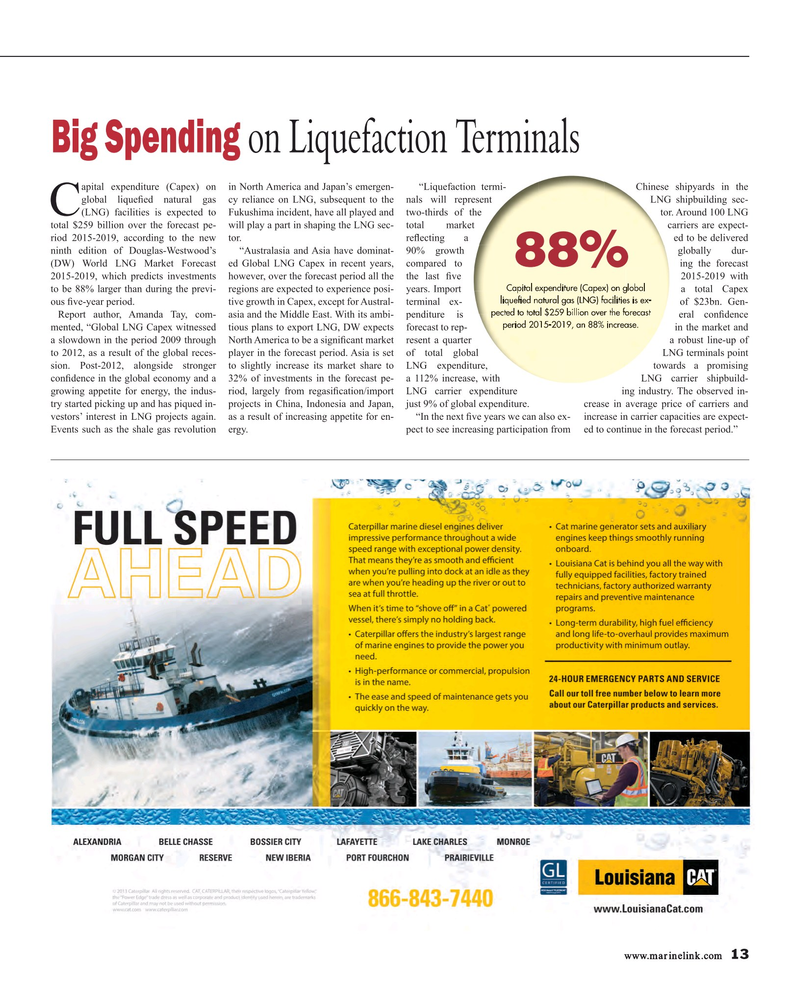 C(LNG) facilities is expected to Fukushima incident, have all played and two-thirds of the tor. Around 100 LNG total $259 billion over the forecast pe- will play a part in shaping the LNG sec- total market carriers are expect- riod 2015-2019, according to the new tor. re? ecting a ed to be delivered ninth edition of Douglas-Westwood’s “Australasia and Asia have dominat- 90% growth globally dur- (DW) World LNG Market Forecast ed Global LNG Capex in recent years, compared to ing the forecast 2015-2019, which predicts investments however, over the forecast period all the the last ? ve 2015-2019 with to be 88% larger than during the previ- regions are expected to experience posi- years. Import a total Capex ous ? ve-year period. tive growth in Capex, except for Austral- terminal ex- of $23bn. Gen-

Report author, Amanda Tay, com- asia and the Middle East. With its ambi- penditure is eral con? dence mented, “Global LNG Capex witnessed tious plans to export LNG, DW expects forecast to rep- in the market and a slowdown in the period 2009 through North America to be a signi? cant market resent a quarter a robust line-up of to 2012, as a result of the global reces- player in the forecast period. Asia is set of total global LNG terminals point sion. Post-2012, alongside stronger to slightly increase its market share to LNG expenditure, towards a promising con? dence in the global economy and a 32% of investments in the forecast pe- a 112% increase, with LNG carrier shipbuild- growing appetite for energy, the indus- riod, largely from regasi? cation/import LNG carrier expenditure ing industry. The observed in- try started picking up and has piqued in- projects in China, Indonesia and Japan, just 9% of global expenditure. crease in average price of carriers and vestors’ interest in LNG projects again. as a result of increasing appetite for en- “In the next ? ve years we can also ex- increase in carrier capacities are expect-

Events such as the shale gas revolution ergy. pect to see increasing participation from ed to continue in the forecast period.” www.marinelink.com 13