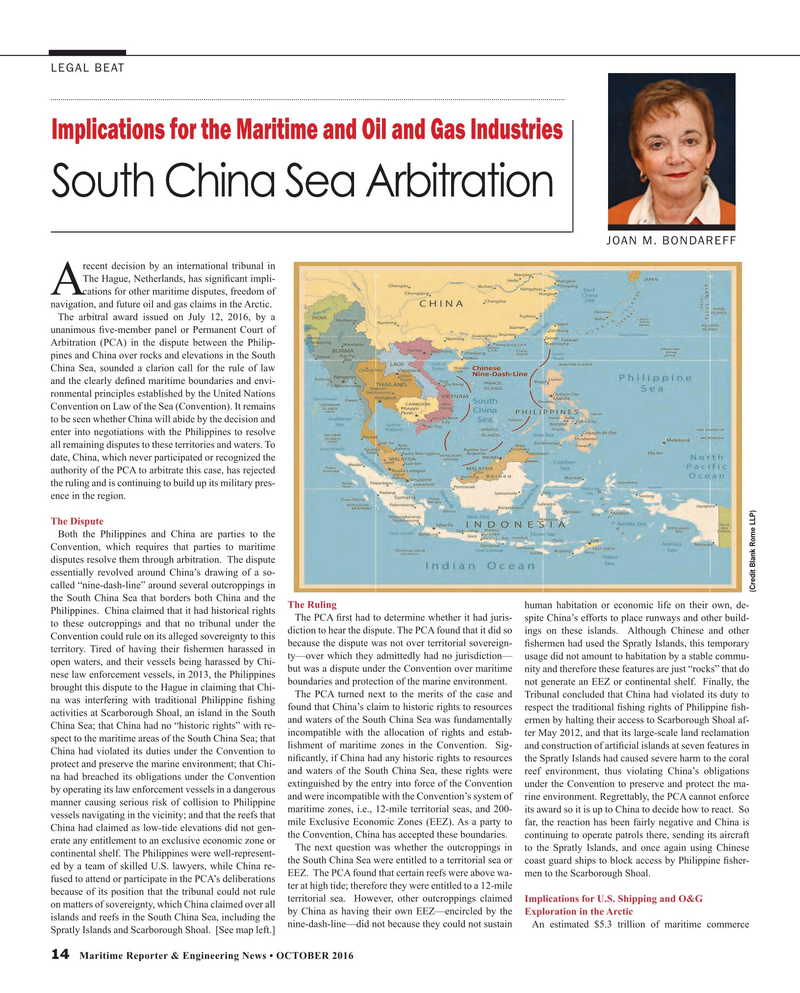 Implications for the Maritime and Oil and Gas Industries

JOAN M. BONDAREFF recent decision by an international tribunal in

A cations for other maritime disputes, freedom of navigation, and future oil and gas claims in the Arctic.

The arbitral award issued on July 12, 2016, by a unanimous ? ve-member panel or Permanent Court of

China Sea, sounded a clarion call for the rule of law and the clearly de? ned maritime boundaries and envi- ronmental principles established by the United Nations

Convention on Law of the Sea (Convention). It remains to be seen whether China will abide by the decision and enter into negotiations with the Philippines to resolve all remaining disputes to these territories and waters. To date, China, which never participated or recognized the authority of the PCA to arbitrate this case, has rejected the ruling and is continuing to build up its military pres- ence in the region.

Both the Philippines and China are parties to the

Convention, which requires that parties to maritime disputes resolve them through arbitration. The dispute essentially revolved around China’s drawing of a so- called “nine-dash-line” around several outcroppings in (Credit Blank Rome LLP) the South China Sea that borders both China and the

The Ruling human habitation or economic life on their own, de-

Philippines. China claimed that it had historical rights

The PCA ? rst had to determine whether it had juris- spite China’s efforts to place runways and other build- to these outcroppings and that no tribunal under the diction to hear the dispute. The PCA found that it did so ings on these islands. Although Chinese and other

Convention could rule on its alleged sovereignty to this territory. Tired of having their ? shermen harassed in because the dispute was not over territorial sovereign- ? shermen had used the Spratly Islands, this temporary ty—over which they admittedly had no jurisdiction— usage did not amount to habitation by a stable commu- open waters, and their vessels being harassed by Chi- but was a dispute under the Convention over maritime nity and therefore these features are just “rocks” that do nese law enforcement vessels, in 2013, the Philippines boundaries and protection of the marine environment. not generate an EEZ or continental shelf. Finally, the brought this dispute to the Hague in claiming that Chi-

The PCA turned next to the merits of the case and Tribunal concluded that China had violated its duty to na was interfering with traditional Philippine ? shing found that China’s claim to historic rights to resources respect the traditional ? shing rights of Philippine ? sh- activities at Scarborough Shoal, an island in the South and waters of the South China Sea was fundamentally ermen by halting their access to Scarborough Shoal af-

China Sea; that China had no “historic rights” with re- incompatible with the allocation of rights and estab- ter May 2012, and that its large-scale land reclamation spect to the maritime areas of the South China Sea; that lishment of maritime zones in the Convention. Sig- and construction of arti? cial islands at seven features in

China had violated its duties under the Convention to ni? cantly, if China had any historic rights to resources the Spratly Islands had caused severe harm to the coral protect and preserve the marine environment; that Chi- and waters of the South China Sea, these rights were reef environment, thus violating China’s obligations na had breached its obligations under the Convention extinguished by the entry into force of the Convention under the Convention to preserve and protect the ma- by operating its law enforcement vessels in a dangerous and were incompatible with the Convention’s system of rine environment. Regrettably, the PCA cannot enforce manner causing serious risk of collision to Philippine maritime zones, i.e., 12-mile territorial seas, and 200- its award so it is up to China to decide how to react. So vessels navigating in the vicinity; and that the reefs that mile Exclusive Economic Zones (EEZ). As a party to far, the reaction has been fairly negative and China is

China had claimed as low-tide elevations did not gen- the Convention, China has accepted these boundaries. continuing to operate patrols there, sending its aircraft erate any entitlement to an exclusive economic zone or

The next question was whether the outcroppings in to the Spratly Islands, and once again using Chinese continental shelf. The Philippines were well-represent- the South China Sea were entitled to a territorial sea or coast guard ships to block access by Philippine ? sher- ed by a team of skilled U.S. lawyers, while China re-

EEZ. The PCA found that certain reefs were above wa- men to the Scarborough Shoal. fused to attend or participate in the PCA’s deliberations ter at high tide; therefore they were entitled to a 12-mile because of its position that the tribunal could not rule territorial sea. However, other outcroppings claimed Implications for U.S. Shipping and O&G on matters of sovereignty, which China claimed over all by China as having their own EEZ—encircled by the Exploration in the Arctic islands and reefs in the South China Sea, including the nine-dash-line—did not because they could not sustain An estimated $5.3 trillion of maritime commerce