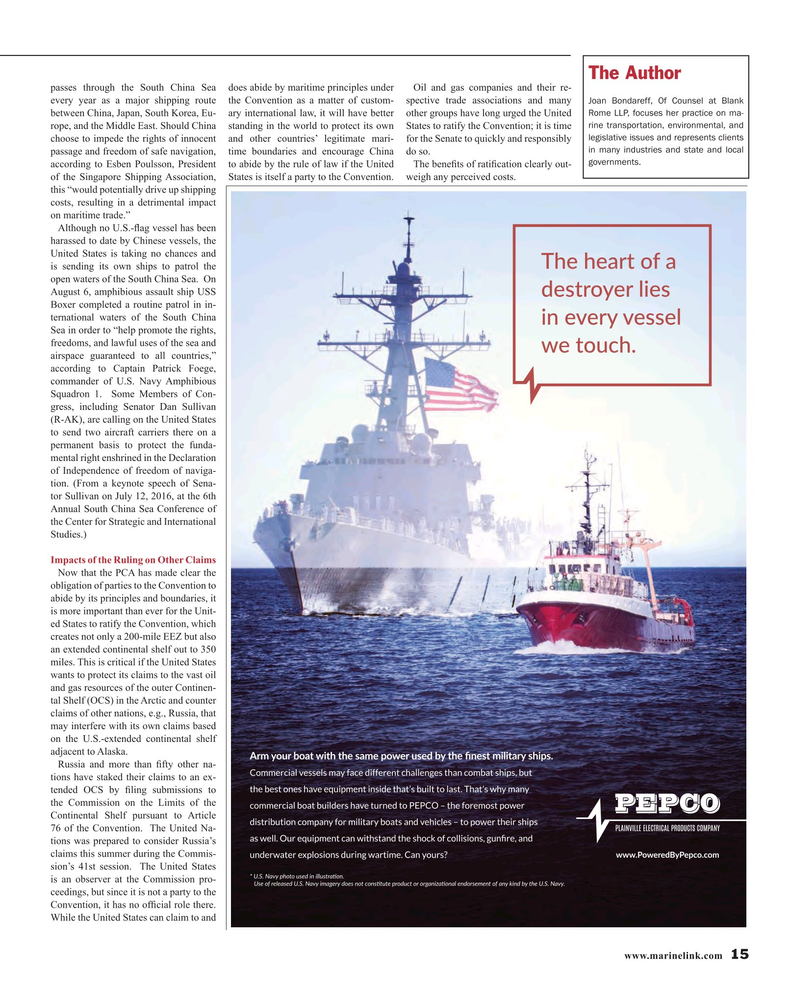 Joan Bondareff, Of Counsel at Blank

Rome LLP, focuses her practice on ma- between China, Japan, South Korea, Eu- ary international law, it will have better other groups have long urged the United rine transportation, environmental, and rope, and the Middle East. Should China standing in the world to protect its own States to ratify the Convention; it is time legislative issues and represents clients choose to impede the rights of innocent and other countries’ legitimate mari- for the Senate to quickly and responsibly in many industries and state and local passage and freedom of safe navigation, time boundaries and encourage China do so. governments.

according to Esben Poulsson, President to abide by the rule of law if the United The bene? ts of rati? cation clearly out- of the Singapore Shipping Association, States is itself a party to the Convention. weigh any perceived costs. this “would potentially drive up shipping costs, resulting in a detrimental impact on maritime trade.”

Although no U.S.-? ag vessel has been harassed to date by Chinese vessels, the

United States is taking no chances and

The heart of a is sending its own ships to patrol the open waters of the South China Sea. On

Sea in order to “help promote the rights, freedoms, and lawful uses of the sea and we touch.

airspace guaranteed to all countries,” according to Captain Patrick Foege, commander of U.S. Navy Amphibious

Squadron 1. Some Members of Con- gress, including Senator Dan Sullivan (R-AK), are calling on the United States to send two aircraft carriers there on a permanent basis to protect the funda- mental right enshrined in the Declaration of Independence of freedom of naviga- tion. (From a keynote speech of Sena- tor Sullivan on July 12, 2016, at the 6th

Impacts of the Ruling on Other Claims

Now that the PCA has made clear the obligation of parties to the Convention to abide by its principles and boundaries, it is more important than ever for the Unit- ed States to ratify the Convention, which creates not only a 200-mile EEZ but also an extended continental shelf out to 350 miles. This is critical if the United States wants to protect its claims to the vast oil and gas resources of the outer Continen- tal Shelf (OCS) in the Arctic and counter claims of other nations, e.g., Russia, that may interfere with its own claims based on the U.S.-extended continental shelf adjacent to Alaska. ul?o?u0o-|?b|_|_;v-l;ro?;u?v;70?|_;Cm;v|lb?b|-u?v_brvl

Russia and more than ? fty other na-

Commercial vessels may face different challenges than combat ships, but tions have staked their claims to an ex- the best ones have equipment inside that’s built to last. That’s why many tended OCS by ? ling submissions to the Commission on the Limits of the commercial boat builders have turned to PEPCO – the foremost power

PLAINVILLE ELECTRICAL PRODUCTS COMPANY 76 of the Convention. The United Na-

EW[IPP3YVIUYMTQIRXGER[MXLWXERHXLIWLSGOSJGSPPMWMSRWKYRcVIERH tions was prepared to consider Russia’s claims this summer during the Commis- ???lo?;u;7?;r1ol1ol underwater explosions during wartime. Can yours? sion’s 41st session. The United States

ceedings, but since it is not a party to the

Convention, it has no of? cial role there.

While the United States can claim to and www.marinelink.com 15