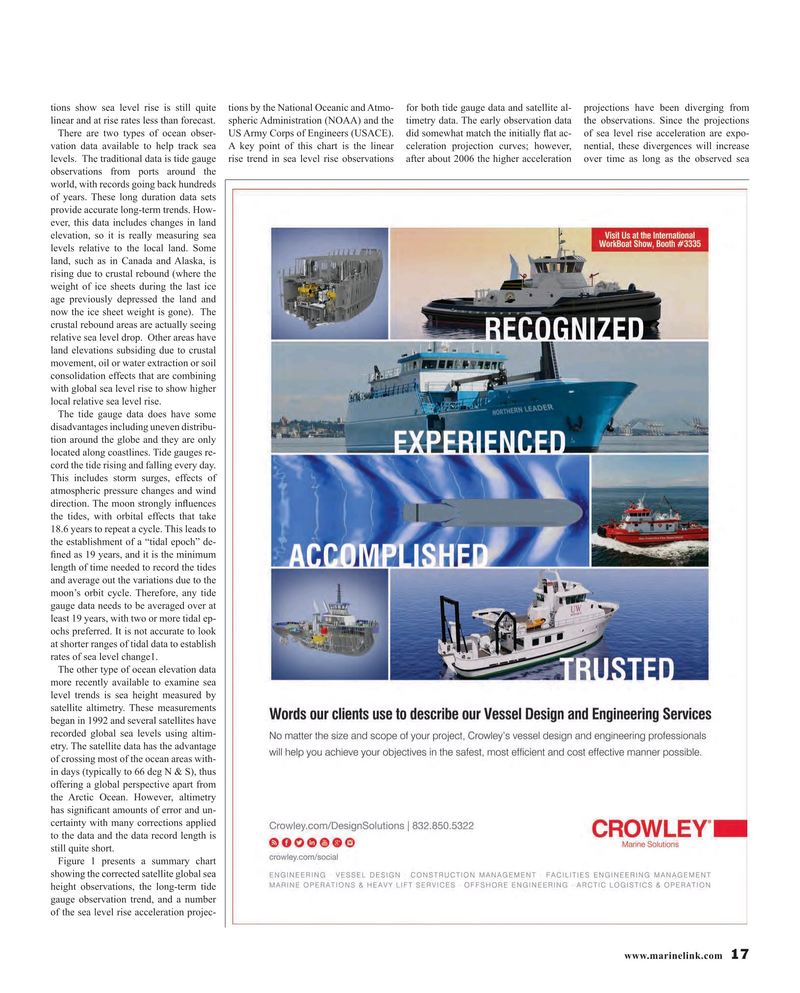 tions show sea level rise is still quite tions by the National Oceanic and Atmo- for both tide gauge data and satellite al- projections have been diverging from linear and at rise rates less than forecast. spheric Administration (NOAA) and the timetry data. The early observation data the observations. Since the projections

There are two types of ocean obser- US Army Corps of Engineers (USACE). did somewhat match the initially ? at ac- of sea level rise acceleration are expo- vation data available to help track sea A key point of this chart is the linear celeration projection curves; however, nential, these divergences will increase levels. The traditional data is tide gauge rise trend in sea level rise observations after about 2006 the higher acceleration over time as long as the observed sea observations from ports around the world, with records going back hundreds of years. These long duration data sets provide accurate long-term trends. How- ever, this data includes changes in land elevation, so it is really measuring sea levels relative to the local land. Some land, such as in Canada and Alaska, is rising due to crustal rebound (where the weight of ice sheets during the last ice age previously depressed the land and now the ice sheet weight is gone). The crustal rebound areas are actually seeing relative sea level drop. Other areas have land elevations subsiding due to crustal movement, oil or water extraction or soil consolidation effects that are combining with global sea level rise to show higher local relative sea level rise.

The tide gauge data does have some disadvantages including uneven distribu- tion around the globe and they are only located along coastlines. Tide gauges re- cord the tide rising and falling every day.

This includes storm surges, effects of atmospheric pressure changes and wind direction. The moon strongly in? uences the tides, with orbital effects that take 18.6 years to repeat a cycle. This leads to the establishment of a “tidal epoch” de- ? ned as 19 years, and it is the minimum length of time needed to record the tides and average out the variations due to the moon’s orbit cycle. Therefore, any tide gauge data needs to be averaged over at least 19 years, with two or more tidal ep- ochs preferred. It is not accurate to look at shorter ranges of tidal data to establish rates of sea level change1.

The other type of ocean elevation data more recently available to examine sea level trends is sea height measured by satellite altimetry. These measurements began in 1992 and several satellites have recorded global sea levels using altim- etry. The satellite data has the advantage of crossing most of the ocean areas with- in days (typically to 66 deg N & S), thus offering a global perspective apart from the Arctic Ocean. However, altimetry has signi? cant amounts of error and un- certainty with many corrections applied to the data and the data record length is still quite short.