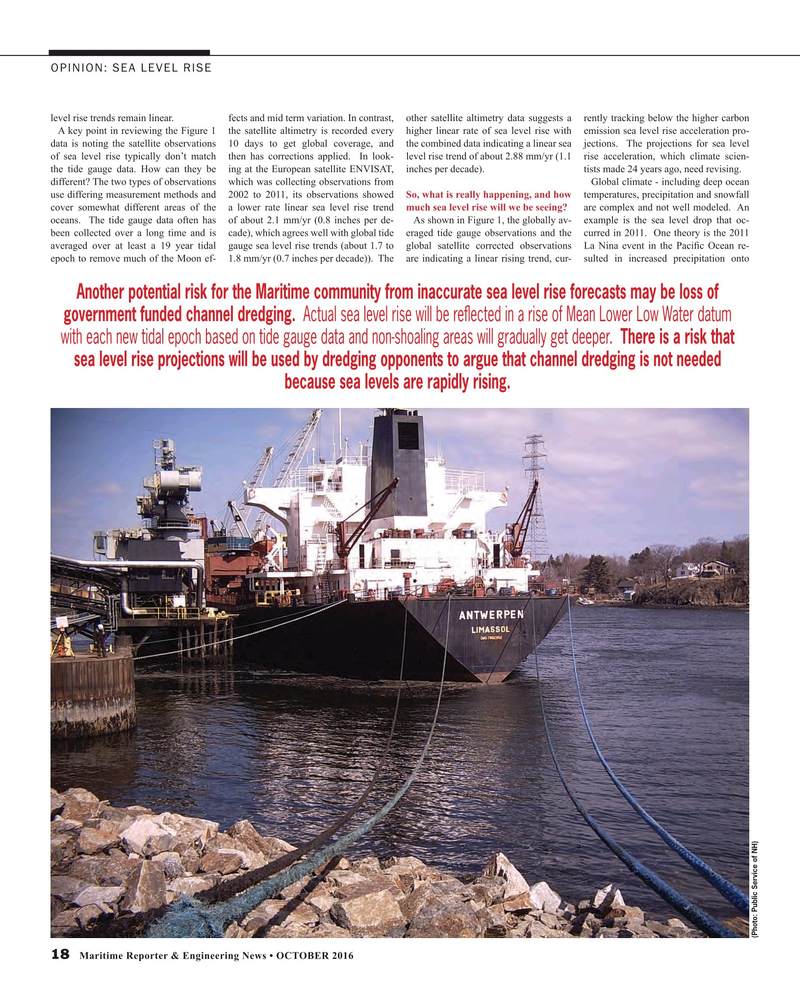 A key point in reviewing the Figure 1 the satellite altimetry is recorded every higher linear rate of sea level rise with emission sea level rise acceleration pro- data is noting the satellite observations 10 days to get global coverage, and the combined data indicating a linear sea jections. The projections for sea level of sea level rise typically don’t match then has corrections applied. In look- level rise trend of about 2.88 mm/yr (1.1 rise acceleration, which climate scien- the tide gauge data. How can they be ing at the European satellite ENVISAT, inches per decade). tists made 24 years ago, need revising. different? The two types of observations which was collecting observations from Global climate - including deep ocean use differing measurement methods and 2002 to 2011, its observations showed So, what is really happening, and how temperatures, precipitation and snowfall cover somewhat different areas of the a lower rate linear sea level rise trend much sea level rise will we be seeing? are complex and not well modeled. An oceans. The tide gauge data often has of about 2.1 mm/yr (0.8 inches per de- As shown in Figure 1, the globally av- example is the sea level drop that oc- been collected over a long time and is cade), which agrees well with global tide eraged tide gauge observations and the curred in 2011. One theory is the 2011 averaged over at least a 19 year tidal gauge sea level rise trends (about 1.7 to global satellite corrected observations La Nina event in the Paci? c Ocean re- epoch to remove much of the Moon ef- 1.8 mm/yr (0.7 inches per decade)). The are indicating a linear rising trend, cur- sulted in increased precipitation onto

Another potential risk for the Maritime community from inaccurate sea level rise forecasts may be loss of government funded channel dredging. Actual sea level rise will be re? ected in a rise of Mean Lower Low Water datum with each new tidal epoch based on tide gauge data and non-shoaling areas will gradually get deeper. There is a risk that sea level rise projections will be used by dredging opponents to argue that channel dredging is not needed because sea levels are rapidly rising.