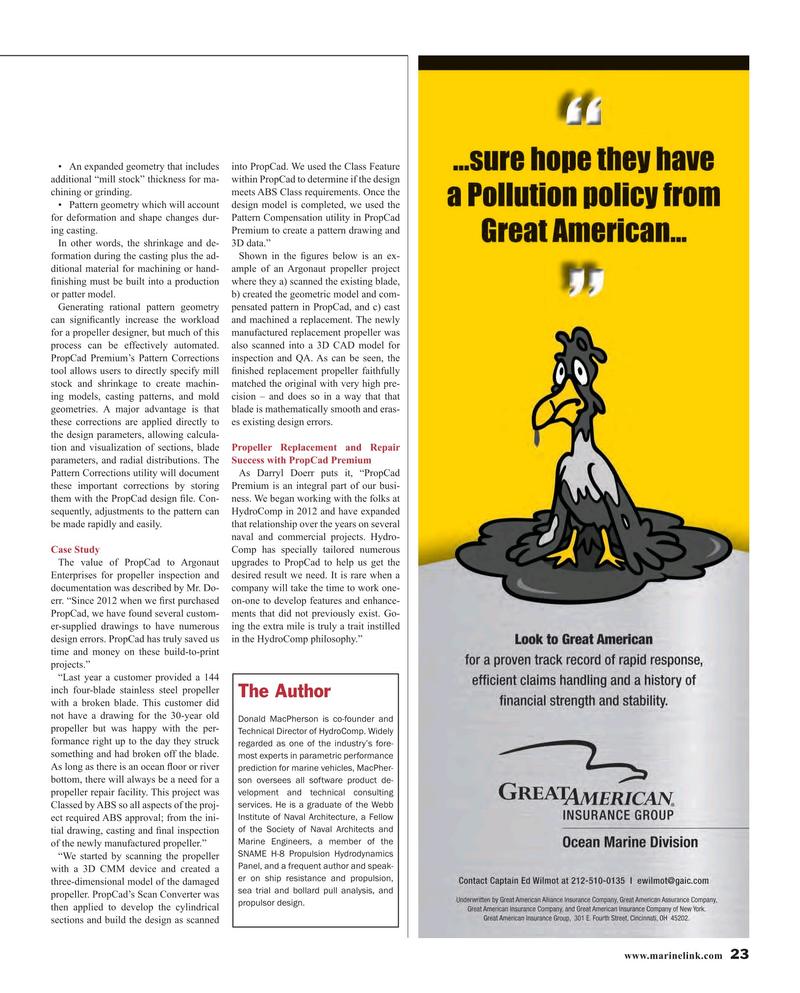 • An expanded geometry that includes into PropCad. We used the Class Feature additional “mill stock” thickness for ma- within PropCad to determine if the design chining or grinding. meets ABS Class requirements. Once the • Pattern geometry which will account design model is completed, we used the for deformation and shape changes dur- Pattern Compensation utility in PropCad ing casting. Premium to create a pattern drawing and

In other words, the shrinkage and de- 3D data.” formation during the casting plus the ad- Shown in the ? gures below is an ex- ditional material for machining or hand- ample of an Argonaut propeller project ? nishing must be built into a production where they a) scanned the existing blade, or patter model. b) created the geometric model and com-

Generating rational pattern geometry pensated pattern in PropCad, and c) cast can signi? cantly increase the workload and machined a replacement. The newly for a propeller designer, but much of this manufactured replacement propeller was process can be effectively automated. also scanned into a 3D CAD model for

PropCad Premium’s Pattern Corrections inspection and QA. As can be seen, the tool allows users to directly specify mill ? nished replacement propeller faithfully stock and shrinkage to create machin- matched the original with very high pre- ing models, casting patterns, and mold cision – and does so in a way that that geometries. A major advantage is that blade is mathematically smooth and eras- these corrections are applied directly to es existing design errors.

Pattern Corrections utility will document As Darryl Doerr puts it, “PropCad these important corrections by storing Premium is an integral part of our busi- them with the PropCad design ? le. Con- ness. We began working with the folks at sequently, adjustments to the pattern can HydroComp in 2012 and have expanded be made rapidly and easily. that relationship over the years on several naval and commercial projects. Hydro-

Enterprises for propeller inspection and desired result we need. It is rare when a documentation was described by Mr. Do- company will take the time to work one- err. “Since 2012 when we ? rst purchased on-one to develop features and enhance-

PropCad, we have found several custom- ments that did not previously exist. Go- er-supplied drawings to have numerous ing the extra mile is truly a trait instilled design errors. PropCad has truly saved us in the HydroComp philosophy.” time and money on these build-to-print projects.” “Last year a customer provided a 144 inch four-blade stainless steel propeller

The Author with a broken blade. This customer did not have a drawing for the 30-year old

Technical Director of HydroComp. Widely formance right up to the day they struck regarded as one of the industry’s fore- something and had broken off the blade. most experts in parametric performance

As long as there is an ocean ? oor or river prediction for marine vehicles, MacPher- bottom, there will always be a need for a son oversees all software product de- velopment and technical consulting propeller repair facility. This project was services. He is a graduate of the Webb

Classed by ABS so all aspects of the proj-

Marine Engineers, a member of the of the newly manufactured propeller.”

SNAME H-8 Propulsion Hydrodynamics “We started by scanning the propeller

Panel, and a frequent author and speak- with a 3D CMM device and created a er on ship resistance and propulsion, three-dimensional model of the damaged sea trial and bollard pull analysis, and propeller. PropCad’s Scan Converter was propulsor design.

then applied to develop the cylindrical sections and build the design as scanned www.marinelink.com 23