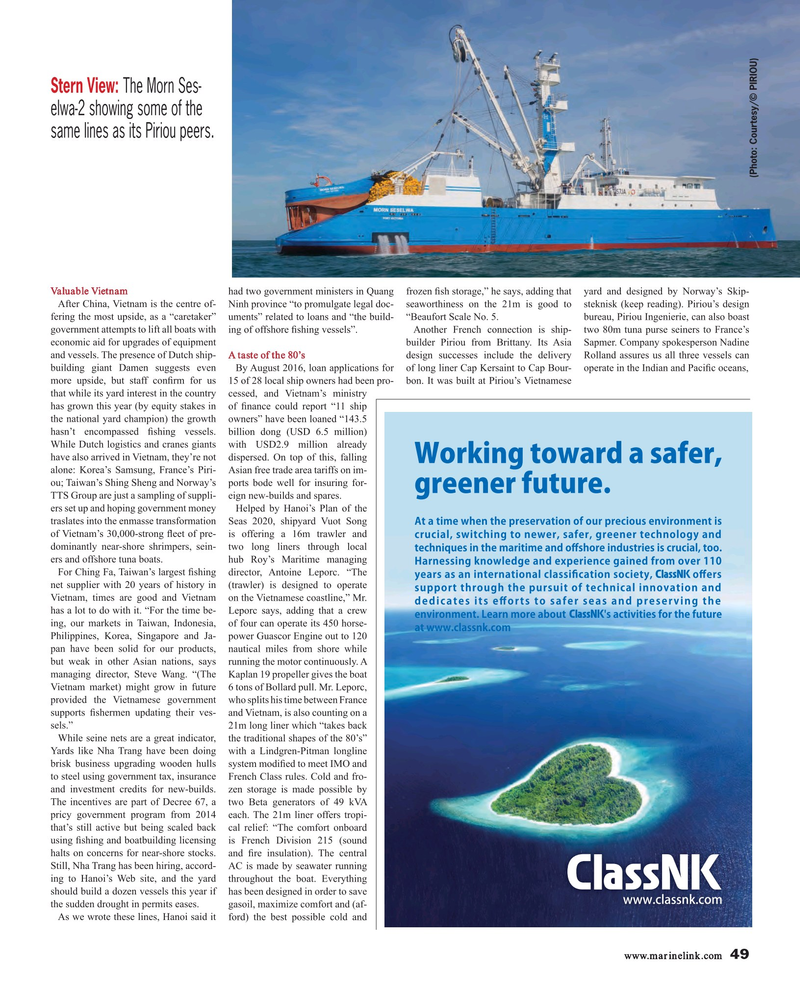 Stern View: The Morn Ses- elwa-2 showing some of the same lines as its Piriou peers. (Photo: Courtesy/© PIRIOU)

After China, Vietnam is the centre of- Ninh province “to promulgate legal doc- seaworthiness on the 21m is good to steknisk (keep reading). Piriou’s design fering the most upside, as a “caretaker” uments” related to loans and “the build- “Beaufort Scale No. 5. bureau, Piriou Ingenierie, can also boast government attempts to lift all boats with ing of offshore ? shing vessels”. Another French connection is ship- two 80m tuna purse seiners to France’s economic aid for upgrades of equipment builder Piriou from Brittany. Its Asia Sapmer. Company spokesperson Nadine and vessels. The presence of Dutch ship- A taste of the 80’s design successes include the delivery Rolland assures us all three vessels can building giant Damen suggests even By August 2016, loan applications for of long liner Cap Kersaint to Cap Bour- operate in the Indian and Paci? c oceans, more upside, but staff con? rm for us 15 of 28 local ship owners had been pro- bon. It was built at Piriou’s Vietnamese that while its yard interest in the country cessed, and Vietnam’s ministry has grown this year (by equity stakes in of ? nance could report “11 ship the national yard champion) the growth owners” have been loaned “143.5 hasn’t encompassed ? shing vessels. billion dong (USD 6.5 million)

For Ching Fa, Taiwan’s largest ? shing director, Antoine Leporc. “The net supplier with 20 years of history in (trawler) is designed to operate

Vietnam, times are good and Vietnam on the Vietnamese coastline,” Mr. has a lot to do with it. “For the time be- Leporc says, adding that a crew ing, our markets in Taiwan, Indonesia, of four can operate its 450 horse-

Philippines, Korea, Singapore and Ja- power Guascor Engine out to 120 pan have been solid for our products, nautical miles from shore while but weak in other Asian nations, says running the motor continuously. A managing director, Steve Wang. “(The Kaplan 19 propeller gives the boat

Vietnam market) might grow in future 6 tons of Bollard pull. Mr. Leporc, provided the Vietnamese government who splits his time between France supports ? shermen updating their ves- and Vietnam, is also counting on a sels.” 21m long liner which “takes back

While seine nets are a great indicator, the traditional shapes of the 80’s”

Yards like Nha Trang have been doing with a Lindgren-Pitman longline brisk business upgrading wooden hulls system modi? ed to meet IMO and to steel using government tax, insurance French Class rules. Cold and fro- and investment credits for new-builds. zen storage is made possible by

The incentives are part of Decree 67, a two Beta generators of 49 kVA pricy government program from 2014 each. The 21m liner offers tropi- that’s still active but being scaled back cal relief: “The comfort onboard using ? shing and boatbuilding licensing is French Division 215 (sound halts on concerns for near-shore stocks. and ? re insulation). The central

Still, Nha Trang has been hiring, accord- AC is made by seawater running ing to Hanoi’s Web site, and the yard throughout the boat. Everything should build a dozen vessels this year if has been designed in order to save the sudden drought in permits eases. gasoil, maximize comfort and (af-

As we wrote these lines, Hanoi said it ford) the best possible cold and www.marinelink.com 49