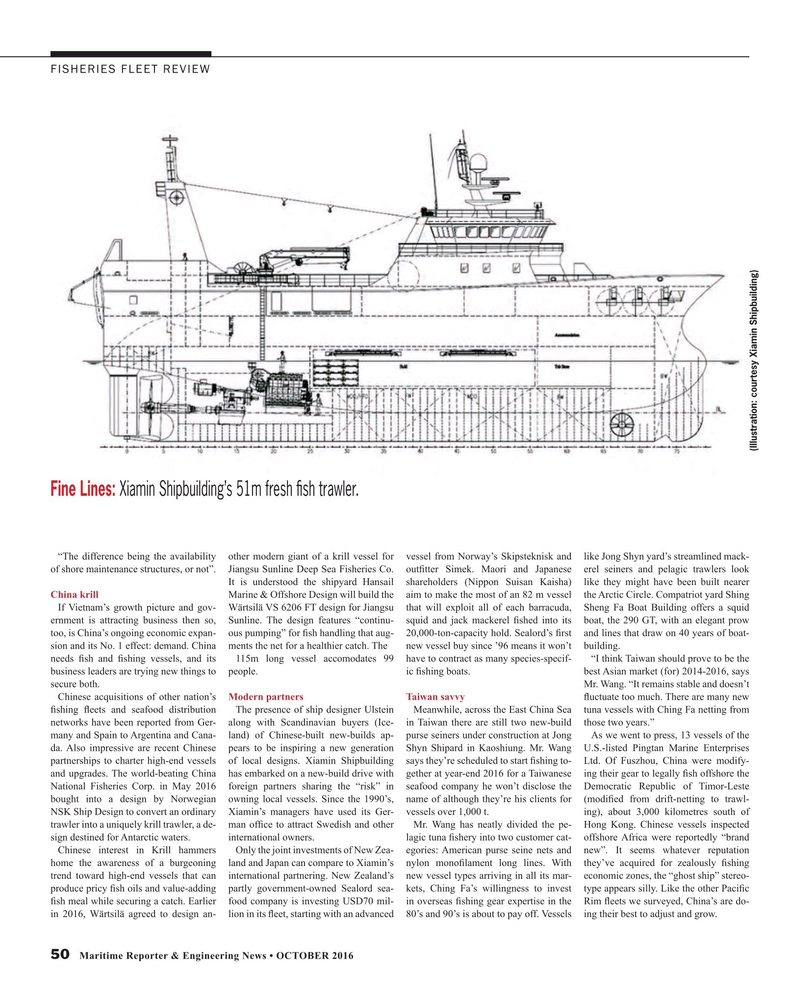 “The difference being the availability other modern giant of a krill vessel for vessel from Norway’s Skipsteknisk and like Jong Shyn yard’s streamlined mack- of shore maintenance structures, or not”. Jiangsu Sunline Deep Sea Fisheries Co. out? tter Simek. Maori and Japanese erel seiners and pelagic trawlers look

China krill Marine & Offshore Design will build the aim to make the most of an 82 m vessel the Arctic Circle. Compatriot yard Shing

If Vietnam’s growth picture and gov- Wärtsilä VS 6206 FT design for Jiangsu that will exploit all of each barracuda, Sheng Fa Boat Building offers a squid ernment is attracting business then so, Sunline. The design features “continu- squid and jack mackerel ? shed into its boat, the 290 GT, with an elegant prow too, is China’s ongoing economic expan- ous pumping” for ? sh handling that aug- 20,000-ton-capacity hold. Sealord’s ? rst and lines that draw on 40 years of boat- sion and its No. 1 effect: demand. China ments the net for a healthier catch. The new vessel buy since ’96 means it won’t building.

needs ? sh and ? shing vessels, and its 115m long vessel accomodates 99 have to contract as many species-specif- “I think Taiwan should prove to be the business leaders are trying new things to people. ic ? shing boats. best Asian market (for) 2014-2016, says secure both. Mr. Wang. “It remains stable and doesn’t

Chinese acquisitions of other nation’s Modern partners Taiwan savvy ? uctuate too much. There are many new ? shing ? eets and seafood distribution The presence of ship designer Ulstein Meanwhile, across the East China Sea tuna vessels with Ching Fa netting from networks have been reported from Ger- along with Scandinavian buyers (Ice- in Taiwan there are still two new-build those two years.” many and Spain to Argentina and Cana- land) of Chinese-built new-builds ap- purse seiners under construction at Jong As we went to press, 13 vessels of the da. Also impressive are recent Chinese pears to be inspiring a new generation Shyn Shipard in Kaoshiung. Mr. Wang U.S.-listed Pingtan Marine Enterprises partnerships to charter high-end vessels of local designs. Xiamin Shipbuilding says they’re scheduled to start ? shing to- Ltd. Of Fuszhou, China were modify- and upgrades. The world-beating China has embarked on a new-build drive with gether at year-end 2016 for a Taiwanese ing their gear to legally ? sh offshore the

National Fisheries Corp. in May 2016 foreign partners sharing the “risk” in seafood company he won’t disclose the Democratic Republic of Timor-Leste bought into a design by Norwegian owning local vessels. Since the 1990’s, name of although they’re his clients for (modi? ed from drift-netting to trawl-

Chinese interest in Krill hammers Only the joint investments of New Zea- egories: American purse seine nets and new”. It seems whatever reputation home the awareness of a burgeoning land and Japan can compare to Xiamin’s nylon mono? lament long lines. With they’ve acquired for zealously ? shing trend toward high-end vessels that can international partnering. New Zealand’s new vessel types arriving in all its mar- economic zones, the “ghost ship” stereo- produce pricy ? sh oils and value-adding partly government-owned Sealord sea- kets, Ching Fa’s willingness to invest type appears silly. Like the other Paci? c ? sh meal while securing a catch. Earlier food company is investing USD70 mil- in overseas ? shing gear expertise in the Rim ? eets we surveyed, China’s are do- in 2016, Wärtsilä agreed to design an- lion in its ? eet, starting with an advanced 80’s and 90’s is about to pay off. Vessels ing their best to adjust and grow.