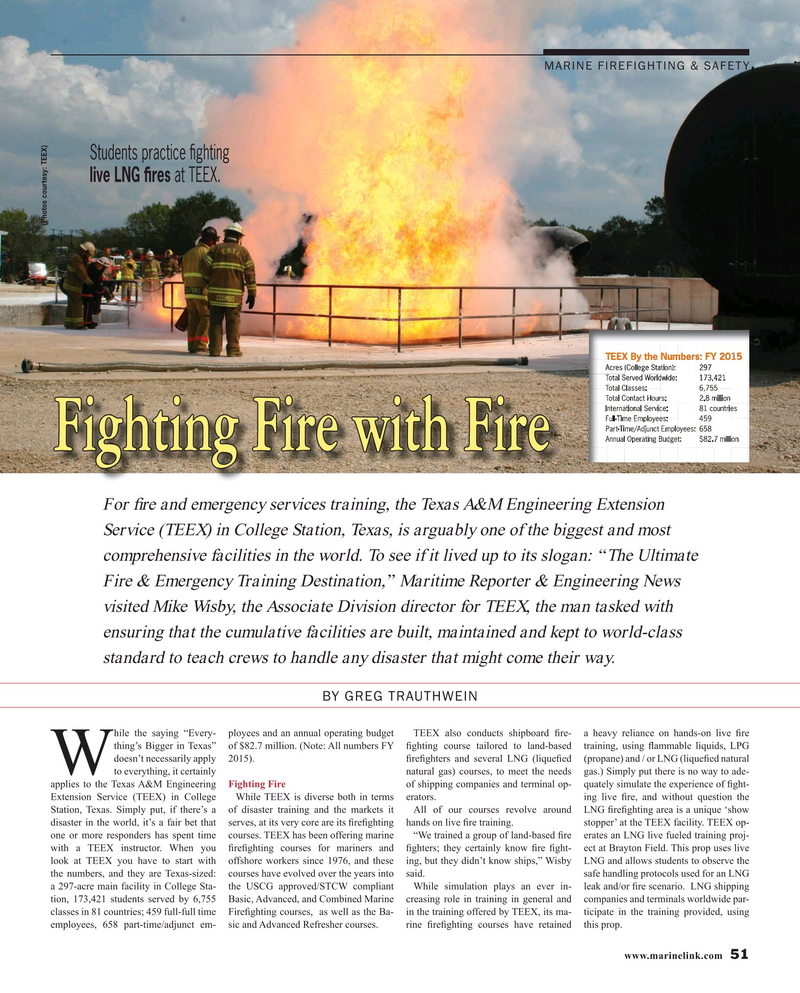 For ? re and emergency services training, the Texas A&M Engineering Extension

Service (TEEX) in College Station, Texas, is arguably one of the biggest and most comprehensive facilities in the world. To see if it lived up to its slogan: “The Ultimate

Fire & Emergency Training Destination,” Maritime Reporter & Engineering News visited Mike Wisby, the Associate Division director for TEEX, the man tasked with ensuring that the cumulative facilities are built, maintained and kept to world-class standard to teach crews to handle any disaster that might come their way.

W to everything, it certainly natural gas) courses, to meet the needs gas.) Simply put there is no way to ade- applies to the Texas A&M Engineering Fighting Fire of shipping companies and terminal op- quately simulate the experience of ? ght-

Extension Service (TEEX) in College While TEEX is diverse both in terms erators. ing live ? re, and without question the

Station, Texas. Simply put, if there’s a of disaster training and the markets it All of our courses revolve around LNG ? re? ghting area is a unique ‘show disaster in the world, it’s a fair bet that serves, at its very core are its ? re? ghting hands on live ? re training. stopper’ at the TEEX facility. TEEX op- one or more responders has spent time courses. TEEX has been offering marine “We trained a group of land-based ? re erates an LNG live fueled training proj- with a TEEX instructor. When you ? re? ghting courses for mariners and ? ghters; they certainly know ? re ? ght- ect at Brayton Field. This prop uses live look at TEEX you have to start with offshore workers since 1976, and these ing, but they didn’t know ships,” Wisby LNG and allows students to observe the the numbers, and they are Texas-sized: courses have evolved over the years into said. safe handling protocols used for an LNG a 297-acre main facility in College Sta- the USCG approved/STCW compliant While simulation plays an ever in- leak and/or ? re scenario. LNG shipping tion, 173,421 students served by 6,755 Basic, Advanced, and Combined Marine creasing role in training in general and companies and terminals worldwide par- classes in 81 countries; 459 full-full time Fire? ghting courses, as well as the Ba- in the training offered by TEEX, its ma- ticipate in the training provided, using employees, 658 part-time/adjunct em- sic and Advanced Refresher courses. rine ? re? ghting courses have retained this prop.