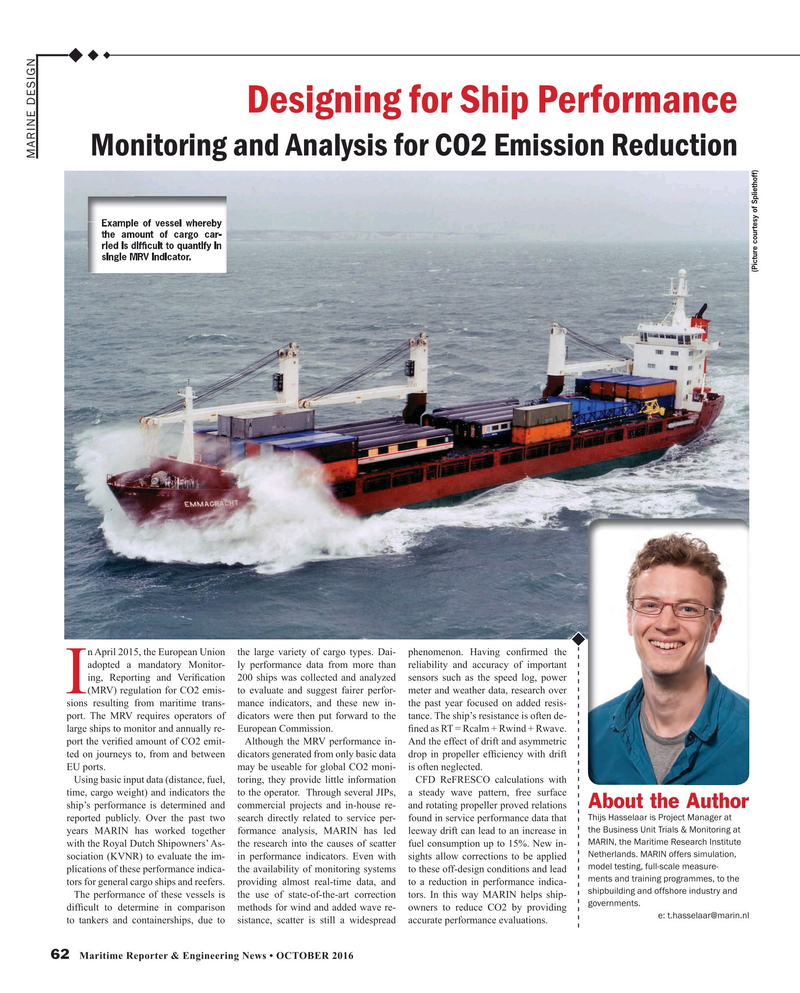 MARINE DESIGN (Picture courtesy of Spliethoff) n April 2015, the European Union the large variety of cargo types. Dai- phenomenon. Having con? rmed the adopted a mandatory Monitor- ly performance data from more than reliability and accuracy of important ing, Reporting and Veri? cation 200 ships was collected and analyzed sensors such as the speed log, power

I(MRV) regulation for CO2 emis- to evaluate and suggest fairer perfor- meter and weather data, research over sions resulting from maritime trans- mance indicators, and these new in- the past year focused on added resis- port. The MRV requires operators of dicators were then put forward to the tance. The ship’s resistance is often de- large ships to monitor and annually re- European Commission. ? ned as RT = Rcalm + Rwind + Rwave. port the veri? ed amount of CO2 emit- Although the MRV performance in- And the effect of drift and asymmetric ted on journeys to, from and between dicators generated from only basic data drop in propeller ef? ciency with drift

EU ports. may be useable for global CO2 moni- is often neglected.

Thijs Hasselaar is Project Manager at reported publicly. Over the past two search directly related to service per- found in service performance data that the Business Unit Trials & Monitoring at years MARIN has worked together formance analysis, MARIN has led leeway drift can lead to an increase in

MARIN, the Maritime Research Institute with the Royal Dutch Shipowners’ As- the research into the causes of scatter fuel consumption up to 15%. New in-

Netherlands. MARIN offers simulation, sociation (KVNR) to evaluate the im- in performance indicators. Even with sights allow corrections to be applied model testing, full-scale measure- plications of these performance indica- the availability of monitoring systems to these off-design conditions and lead ments and training programmes, to the tors for general cargo ships and reefers. providing almost real-time data, and to a reduction in performance indica- shipbuilding and offshore industry and

The performance of these vessels is the use of state-of-the-art correction tors. In this way MARIN helps ship- governments. dif? cult to determine in comparison methods for wind and added wave re- owners to reduce CO2 by providing e: [email protected] to tankers and containerships, due to sistance, scatter is still a widespread accurate performance evaluations.