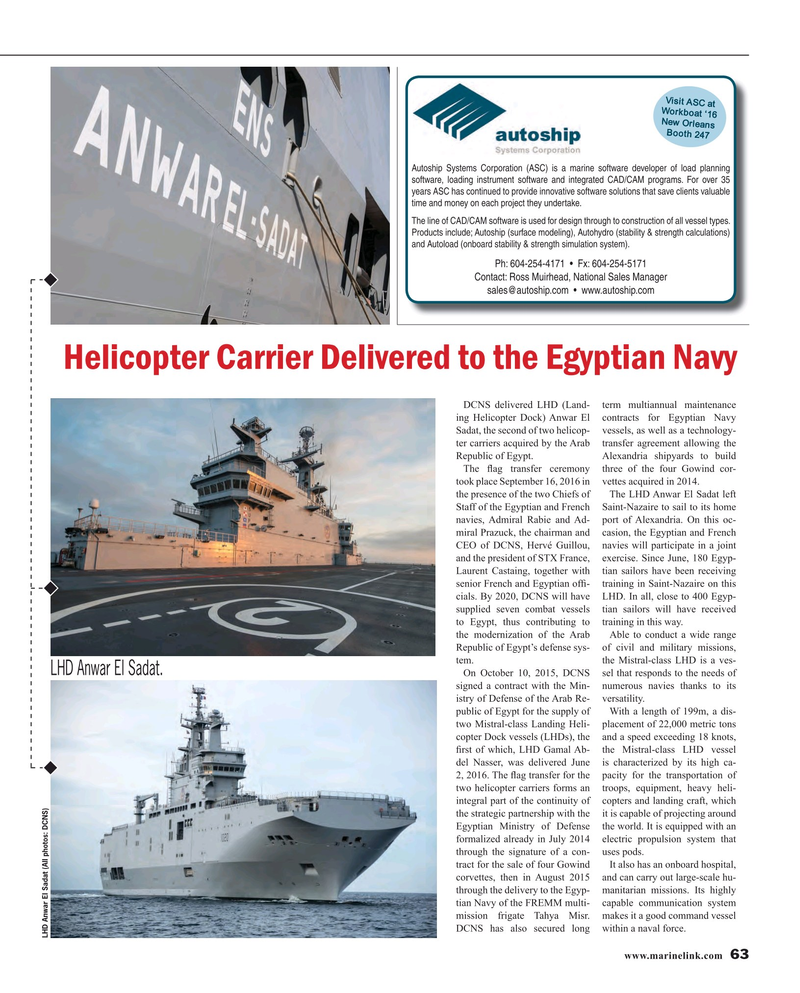 Autoship Systems Corporation (ASC) is a marine software developer of load planning software, loading instrument software and integrated CAD/CAM programs. For over 35 years ASC has continued to provide innovative software solutions that save clients valuable time and money on each project they undertake.

The line of CAD/CAM software is used for design through to construction of all vessel types.

Sadat, the second of two helicop- vessels, as well as a technology- ter carriers acquired by the Arab transfer agreement allowing the

CEO of DCNS, Hervé Guillou, navies will participate in a joint and the president of STX France, exercise. Since June, 180 Egyp-

Laurent Castaing, together with tian sailors have been receiving senior French and Egyptian of? - training in Saint-Nazaire on this cials. By 2020, DCNS will have LHD. In all, close to 400 Egyp- supplied seven combat vessels tian sailors will have received to Egypt, thus contributing to training in this way.

the modernization of the Arab Able to conduct a wide range

Republic of Egypt’s defense sys- of civil and military missions, tem. the Mistral-class LHD is a ves-

On October 10, 2015, DCNS sel that responds to the needs of signed a contract with the Min- numerous navies thanks to its istry of Defense of the Arab Re- versatility. public of Egypt for the supply of With a length of 199m, a dis- two Mistral-class Landing Heli- placement of 22,000 metric tons copter Dock vessels (LHDs), the and a speed exceeding 18 knots, ? rst of which, LHD Gamal Ab- the Mistral-class LHD vessel del Nasser, was delivered June is characterized by its high ca- 2, 2016. The ? ag transfer for the pacity for the transportation of two helicopter carriers forms an troops, equipment, heavy heli- integral part of the continuity of copters and landing craft, which the strategic partnership with the it is capable of projecting around

Egyptian Ministry of Defense the world. It is equipped with an formalized already in July 2014 electric propulsion system that through the signature of a con- uses pods. tract for the sale of four Gowind It also has an onboard hospital, corvettes, then in August 2015 and can carry out large-scale hu- through the delivery to the Egyp- manitarian missions. Its highly tian Navy of the FREMM multi- capable communication system mission frigate Tahya Misr. makes it a good command vessel

DCNS has also secured long within a naval force.