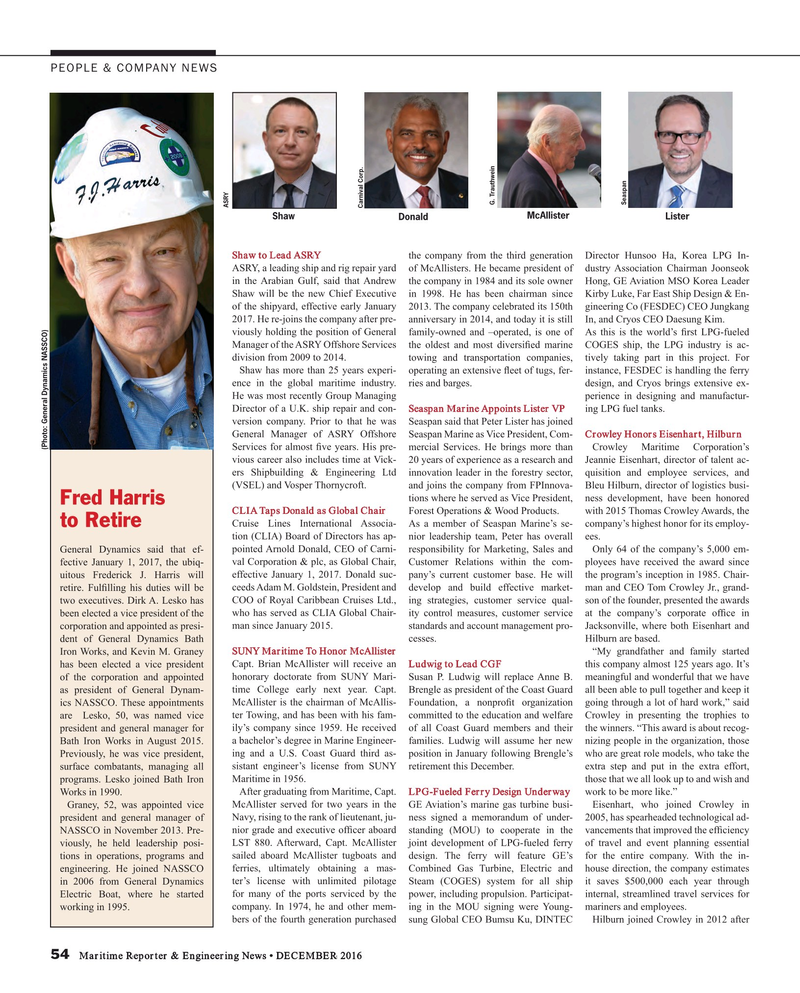 Shaw to Lead ASRY the company from the third generation Director Hunsoo Ha, Korea LPG In-

ASRY, a leading ship and rig repair yard of McAllisters. He became president of dustry Association Chairman Joonseok in the Arabian Gulf, said that Andrew the company in 1984 and its sole owner Hong, GE Aviation MSO Korea Leader

Shaw will be the new Chief Executive in 1998. He has been chairman since Kirby Luke, Far East Ship Design & En- of the shipyard, effective early January 2013. The company celebrated its 150th gineering Co (FESDEC) CEO Jungkang 2017. He re-joins the company after pre- anniversary in 2014, and today it is still In, and Cryos CEO Daesung Kim. viously holding the position of General family-owned and –operated, is one of As this is the world’s ? rst LPG-fueled

Manager of the ASRY Offshore Services the oldest and most diversi? ed marine COGES ship, the LPG industry is ac- division from 2009 to 2014. towing and transportation companies, tively taking part in this project. For

He was most recently Group Managing perience in designing and manufactur-

Director of a U.K. ship repair and con- Seaspan Marine Appoints Lister VP ing LPG fuel tanks. version company. Prior to that he was Seaspan said that Peter Lister has joined

Services for almost ? ve years. His pre- mercial Services. He brings more than Crowley Maritime Corporation’s vious career also includes time at Vick- 20 years of experience as a research and Jeannie Eisenhart, director of talent ac- ers Shipbuilding & Engineering Ltd innovation leader in the forestry sector, quisition and employee services, and (VSEL) and Vosper Thornycroft. and joins the company from FPInnova- Bleu Hilburn, director of logistics busi- tions where he served as Vice President, ness development, have been honored

Cruise Lines International Associa- As a member of Seaspan Marine’s se- company’s highest honor for its employ- to Retire tion (CLIA) Board of Directors has ap- nior leadership team, Peter has overall ees.

General Dynamics said that ef- pointed Arnold Donald, CEO of Carni- responsibility for Marketing, Sales and Only 64 of the company’s 5,000 em- fective January 1, 2017, the ubiq- val Corporation & plc, as Global Chair, Customer Relations within the com- ployees have received the award since uitous Frederick J. Harris will effective January 1, 2017. Donald suc- pany’s current customer base. He will the program’s inception in 1985. Chair- retire. Ful? lling his duties will be ceeds Adam M. Goldstein, President and develop and build effective market- man and CEO Tom Crowley Jr., grand- two executives. Dirk A. Lesko has COO of Royal Caribbean Cruises Ltd., ing strategies, customer service qual- son of the founder, presented the awards been elected a vice president of the who has served as CLIA Global Chair- ity control measures, customer service at the company’s corporate of? ce in corporation and appointed as presi- man since January 2015. standards and account management pro- Jacksonville, where both Eisenhart and dent of General Dynamics Bath cesses. Hilburn are based.

Iron Works, and Kevin M. Graney SUNY Maritime To Honor McAllister “My grandfather and family started has been elected a vice president Capt. Brian McAllister will receive an Ludwig to Lead CGF this company almost 125 years ago. It’s of the corporation and appointed honorary doctorate from SUNY Mari- Susan P. Ludwig will replace Anne B. meaningful and wonderful that we have as president of General Dynam- time College early next year. Capt. Brengle as president of the Coast Guard all been able to pull together and keep it ics NASSCO. These appointments McAllister is the chairman of McAllis- Foundation, a nonpro? t organization going through a lot of hard work,” said are Lesko, 50, was named vice ter Towing, and has been with his fam- committed to the education and welfare Crowley in presenting the trophies to president and general manager for ily’s company since 1959. He received of all Coast Guard members and their the winners. “This award is about recog-

Bath Iron Works in August 2015. a bachelor’s degree in Marine Engineer- families. Ludwig will assume her new nizing people in the organization, those

Previously, he was vice president, ing and a U.S. Coast Guard third as- position in January following Brengle’s who are great role models, who take the surface combatants, managing all sistant engineer’s license from SUNY retirement this December. extra step and put in the extra effort, programs. Lesko joined Bath Iron Maritime in 1956. those that we all look up to and wish and

Works in 1990. After graduating from Maritime, Capt. LPG-Fueled Ferry Design Underway work to be more like.”

Graney, 52, was appointed vice McAllister served for two years in the GE Aviation’s marine gas turbine busi- Eisenhart, who joined Crowley in president and general manager of Navy, rising to the rank of lieutenant, ju- ness signed a memorandum of under- 2005, has spearheaded technological ad-

NASSCO in November 2013. Pre- nior grade and executive of? cer aboard standing (MOU) to cooperate in the vancements that improved the ef? ciency viously, he held leadership posi- LST 880. Afterward, Capt. McAllister joint development of LPG-fueled ferry of travel and event planning essential tions in operations, programs and sailed aboard McAllister tugboats and design. The ferry will feature GE’s for the entire company. With the in- engineering. He joined NASSCO ferries, ultimately obtaining a mas- Combined Gas Turbine, Electric and house direction, the company estimates in 2006 from General Dynamics ter’s license with unlimited pilotage Steam (COGES) system for all ship it saves $500,000 each year through

Electric Boat, where he started for many of the ports serviced by the power, including propulsion. Participat- internal, streamlined travel services for working in 1995. company. In 1974, he and other mem- ing in the MOU signing were Young- mariners and employees.