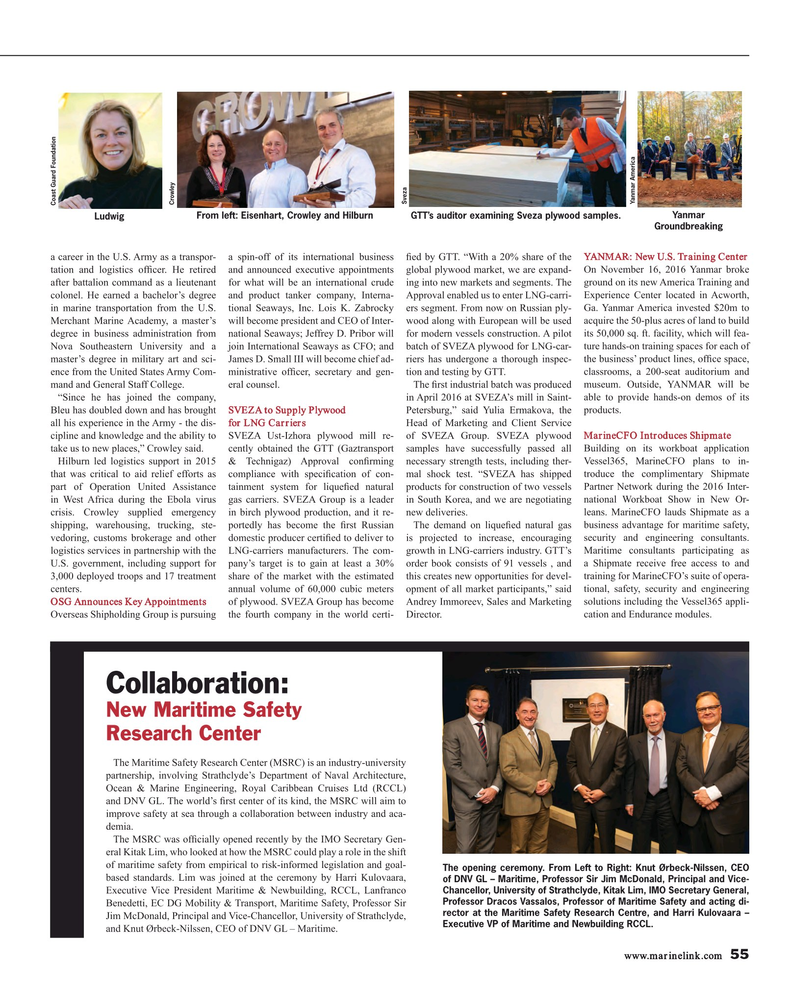 Groundbreaking a career in the U.S. Army as a transpor- a spin-off of its international business ? ed by GTT. “With a 20% share of the YANMAR: New U.S. Training Center tation and logistics of? cer. He retired and announced executive appointments global plywood market, we are expand- On November 16, 2016 Yanmar broke after battalion command as a lieutenant for what will be an international crude ing into new markets and segments. The ground on its new America Training and colonel. He earned a bachelor’s degree and product tanker company, Interna- Approval enabled us to enter LNG-carri- Experience Center located in Acworth, in marine transportation from the U.S. tional Seaways, Inc. Lois K. Zabrocky ers segment. From now on Russian ply- Ga. Yanmar America invested $20m to

Merchant Marine Academy, a master’s will become president and CEO of Inter- wood along with European will be used acquire the 50-plus acres of land to build degree in business administration from national Seaways; Jeffrey D. Pribor will for modern vessels construction. A pilot its 50,000 sq. ft. facility, which will fea-

Nova Southeastern University and a join International Seaways as CFO; and batch of SVEZA plywood for LNG-car- ture hands-on training spaces for each of master’s degree in military art and sci- James D. Small III will become chief ad- riers has undergone a thorough inspec- the business’ product lines, of? ce space, ence from the United States Army Com- ministrative of? cer, secretary and gen- tion and testing by GTT. classrooms, a 200-seat auditorium and mand and General Staff College. eral counsel. The ? rst industrial batch was produced museum. Outside, YANMAR will be “Since he has joined the company, in April 2016 at SVEZA’s mill in Saint- able to provide hands-on demos of its

Bleu has doubled down and has brought SVEZA to Supply Plywood Petersburg,” said Yulia Ermakova, the products. all his experience in the Army - the dis- for LNG Carriers Head of Marketing and Client Service cipline and knowledge and the ability to SVEZA Ust-Izhora plywood mill re- of SVEZA Group. SVEZA plywood MarineCFO Introduces Shipmate take us to new places,” Crowley said. cently obtained the GTT (Gaztransport samples have successfully passed all Building on its workboat application

Hilburn led logistics support in 2015 & Technigaz) Approval con? rming necessary strength tests, including ther- Vessel365, MarineCFO plans to in- that was critical to aid relief efforts as compliance with speci? cation of con- mal shock test. “SVEZA has shipped troduce the complimentary Shipmate part of Operation United Assistance tainment system for lique? ed natural products for construction of two vessels Partner Network during the 2016 Inter- in West Africa during the Ebola virus gas carriers. SVEZA Group is a leader in South Korea, and we are negotiating national Workboat Show in New Or- crisis. Crowley supplied emergency in birch plywood production, and it re- new deliveries. leans. MarineCFO lauds Shipmate as a shipping, warehousing, trucking, ste- portedly has become the ? rst Russian The demand on lique? ed natural gas business advantage for maritime safety, vedoring, customs brokerage and other domestic producer certi? ed to deliver to is projected to increase, encouraging security and engineering consultants. logistics services in partnership with the LNG-carriers manufacturers. The com- growth in LNG-carriers industry. GTT’s Maritime consultants participating as

U.S. government, including support for pany’s target is to gain at least a 30% order book consists of 91 vessels , and a Shipmate receive free access to and 3,000 deployed troops and 17 treatment share of the market with the estimated this creates new opportunities for devel- training for MarineCFO’s suite of opera- centers. annual volume of 60,000 cubic meters opment of all market participants,” said tional, safety, security and engineering

Ocean & Marine Engineering, Royal Caribbean Cruises Ltd (RCCL) and DNV GL. The world’s ? rst center of its kind, the MSRC will aim to improve safety at sea through a collaboration between industry and aca- demia.

The MSRC was of? cially opened recently by the IMO Secretary Gen- eral Kitak Lim, who looked at how the MSRC could play a role in the shift of maritime safety from empirical to risk-informed legislation and goal-

The opening ceremony. From Left to Right: Knut Ørbeck-Nilssen, CEO based standards. Lim was joined at the ceremony by Harri Kulovaara, of DNV GL – Maritime, Professor Sir Jim McDonald, Principal and Vice-