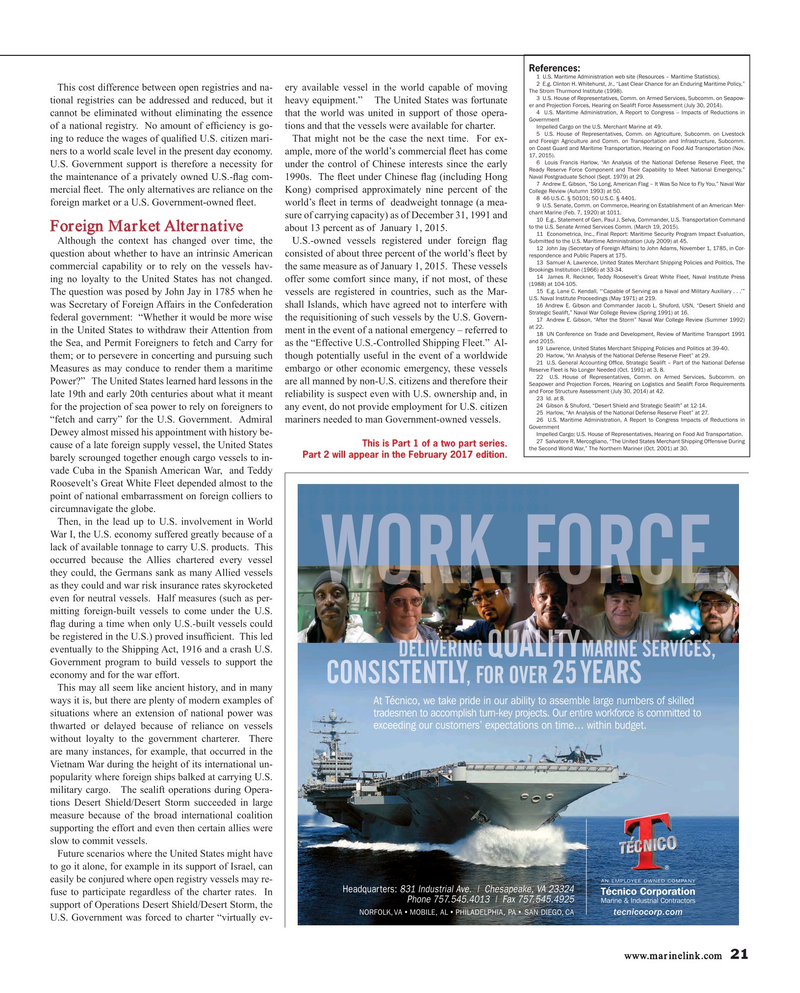 3 U.S. House of Representatives, Comm. on Armed Services, Subcomm. on Seapow- tional registries can be addressed and reduced, but it heavy equipment.” The United States was fortunate er and Projection Forces, Hearing on Sealift Force Assessment (July 30, 2014).

4 U.S. Maritime Administration, A Report to Congress -- Impacts of Reductions in cannot be eliminated without eliminating the essence that the world was united in support of those opera-

Impelled Cargo on the U.S. Merchant Marine at 49.

of a national registry. No amount of ef? ciency is go- tions and that the vessels were available for charter.

6 Louis Francis Harlow, “An Analysis of the National Defense Reserve Fleet, the

U.S. Government support is therefore a necessity for under the control of Chinese interests since the early

the maintenance of a privately owned U.S.-? ag com- 1990s. The ? eet under Chinese ? ag (including Hong 7 Andrew E. Gibson, “So Long, American Flag – It Was So Nice to Fly You,” Naval War mercial ? eet. The only alternatives are reliance on the Kong) comprised approximately nine percent of the

Although the context has changed over time, the U.S.-owned vessels registered under foreign ? ag 12 John Jay (Secretary of Foreign Affairs) to John Adams, November 1, 1785, in Cor- question about whether to have an intrinsic American consisted of about three percent of the world’s ? eet by respondence and Public Papers at 175.

13 Samuel A. Lawrence, United States Merchant Shipping Policies and Politics, The commercial capability or to rely on the vessels hav- the same measure as of January 1, 2015. These vessels

14 James R. Reckner, Teddy Roosevelt’s Great White Fleet, Naval Institute Press ing no loyalty to the United States has not changed. offer some comfort since many, if not most, of these (1988) at 104-105.

The question was posed by John Jay in 1785 when he vessels are registered in countries, such as the Mar-

U.S. Naval Institute Proceedings (May 1971) at 219. 16 Andrew E. Gibson and Commander Jacob L. Shuford, USN, “Desert Shield and was Secretary of Foreign Affairs in the Confederation shall Islands, which have agreed not to interfere with

federal government: “Whether it would be more wise the requisitioning of such vessels by the U.S. Govern- 17 Andrew E. Gibson, “After the Storm” Naval War College Review (Summer 1992) at 22.

in the United States to withdraw their Attention from ment in the event of a national emergency – referred to 18 UN Conference on Trade and Development, Review of Maritime Transport 1991 and 2015.

the Sea, and Permit Foreigners to fetch and Carry for as the “Effective U.S.-Controlled Shipping Fleet.” Al- 19 Lawrence, United States Merchant Shipping Policies and Politics at 39-40.

20 Harlow, “An Analysis of the National Defense Reserve Fleet” at 29.

them; or to persevere in concerting and pursuing such though potentially useful in the event of a worldwide 21 U.S. General Accounting Of? ce, Strategic Sealift – Part of the National Defense

Measures as may conduce to render them a maritime embargo or other economic emergency, these vessels

22 U.S. House of Representatives, Comm. on Armed Services, Subcomm. on

Power?” The United States learned hard lessons in the are all manned by non-U.S. citizens and therefore their

late 19th and early 20th centuries about what it meant reliability is suspect even with U.S. ownership and, in 23 Id. at 8.

for the projection of sea power to rely on foreigners to any event, do not provide employment for U.S. citizen 25 Harlow, “An Analysis of the National Defense Reserve Fleet” at 27.

26 U.S. Maritime Administration, A Report to Congress Impacts of Reductions in “fetch and carry” for the U.S. Government. Admiral mariners needed to man Government-owned vessels.

Dewey almost missed his appointment with history be-

This is Part 1 of a two part series. cause of a late foreign supply vessel, the United States the Second World War,” The Northern Mariner (Oct. 2001) at 30.

Part 2 will appear in the February 2017 edition.

barely scrounged together enough cargo vessels to in- vade Cuba in the Spanish American War, and Teddy

Roosevelt’s Great White Fleet depended almost to the point of national embarrassment on foreign colliers to circumnavigate the globe.

Then, in the lead up to U.S. involvement in World

War I, the U.S. economy suffered greatly because of a lack of available tonnage to carry U.S. products. This occurred because the Allies chartered every vessel they could, the Germans sank as many Allied vessels as they could and war risk insurance rates skyrocketed even for neutral vessels. Half measures (such as per- mitting foreign-built vessels to come under the U.S. ? ag during a time when only U.S.-built vessels could be registered in the U.S.) proved insuf? cient. This led eventually to the Shipping Act, 1916 and a crash U.S.

Government program to build vessels to support the economy and for the war effort.

This may all seem like ancient history, and in many ways it is, but there are plenty of modern examples of

At Técnico, we take pride in our ability to assemble large numbers of skilled situations where an extension of national power was tradesmen to accomplish turn-key projects. Our entire workforce is committed to exceeding our customers’ expectations on time… within budget.

thwarted or delayed because of reliance on vessels without loyalty to the government charterer. There are many instances, for example, that occurred in the

Vietnam War during the height of its international un- popularity where foreign ships balked at carrying U.S. military cargo. The sealift operations during Opera- tions Desert Shield/Desert Storm succeeded in large measure because of the broad international coalition supporting the effort and even then certain allies were slow to commit vessels.

Future scenarios where the United States might have to go it alone, for example in its support of Israel, can easily be conjured where open registry vessels may re-

Headquarters: 831 Industrial Ave. | Chesapeake, VA 23324 fuse to participate regardless of the charter rates. In Técnico Corporation